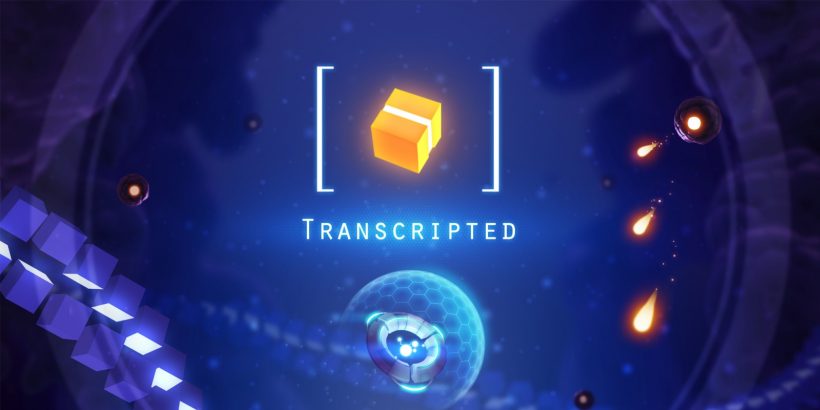 Over the past several months, the Switch has become a suitable home to many games within the twin-stick shooter genre and the match-three puzzle genre. Some would argue that these are actually becoming a bit oversaturated, but in a stroke of genius, Transcripted manages to successfully fuse the two to create an experience like no other.

You play as a microscopic drone travelling the depths of a test body, and it’s your job to rebuild the DNA structures throughout the levels and completely destroy the virus infection. It’s a bland storyline in all honesty, and the characters involved talk far too much between levels, dragging out a plot where one wasn’t really needed. Thankfully however, the game shines regardless thanks to its unique gameplay. 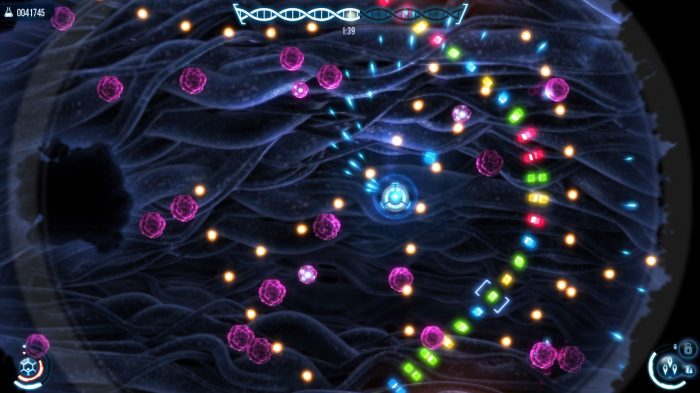 As you pilot around the areas, pathogen globules float towards your probe, which you must fend off utilising typical twin-stick shooting mechanics. As more and more of the pathogens enter the fray, the action can actually become fairly intense, despite the overall speed of the gameplay remaining quite slow and deliberate. Upon defeating each pathogen, you’re granted a coloured cube which you must then line up and fire into the coloured DNA structure, matching the colours in order to fill up the DNA gauge at the top of the screen. Fill it up completely and you clear the level. You’ll also face brilliantly designed bosses along the way too, each of which incorporate the match-three DNA structures within their physical bodies, making an already unique premise all the more bonkers.

Both core gameplay elements meld together wonderfully well to create a compelling hook that genuinely works. Players of differing abilities are also well catered for – you can adjust the difficulty of both the shooting gameplay and the puzzle gameplay, so if you’re good at one but not the other, you can tailor the experience to perfectly suit your needs. I personally found leaving both on normal difficulty allowed for the optimum experience for myself, but I’ll likely try again on higher difficulties at a later date. My only gripe with the gameplay itself is that the screen can often get a bit overcrowded with objects and colours – it all gets a bit too hectic at times and you need to be absolutely precise with your aiming, causing a few frustrating moments. 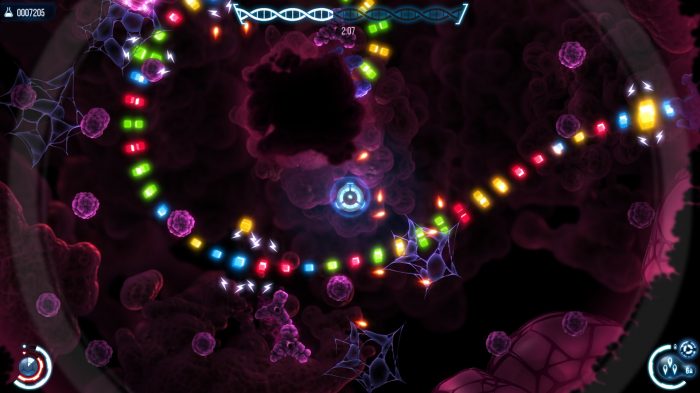 I have to give a special shout out to the audio in Transcripted –  the ambient music is absolutely stellar, making the entire experience feel more relaxing than it has any right to be. It’s the perfect accompaniment to the gameplay itself. Similarly, whilst I don’t feel the plot narration is particularly necessary, the voiceover work on display is excellent. On the flip side, the visuals are pretty basic for the most part, but they do the job. It’s a pretty dark game and the only glimpses of colour are within the DNA strands themselves, which is understandable, but I would have liked a bit more variety.

If you’ve found yourself getting a bit fatigued with the twin stick genre or the match-three puzzle genre, I can’t recommend Transcripted enough. It blends the two together wonderfully well, creating an experience that you likely haven’t seen before. The combination of a superb gameplay hook and a beautiful soundtrack makes this a game well worth playing.

Transcripted successfully blends two compelling genres together to create an experience like no other. It’s somewhat held back by a rather lacklustre narrative, but the gameplay will keep you hooked for hours.