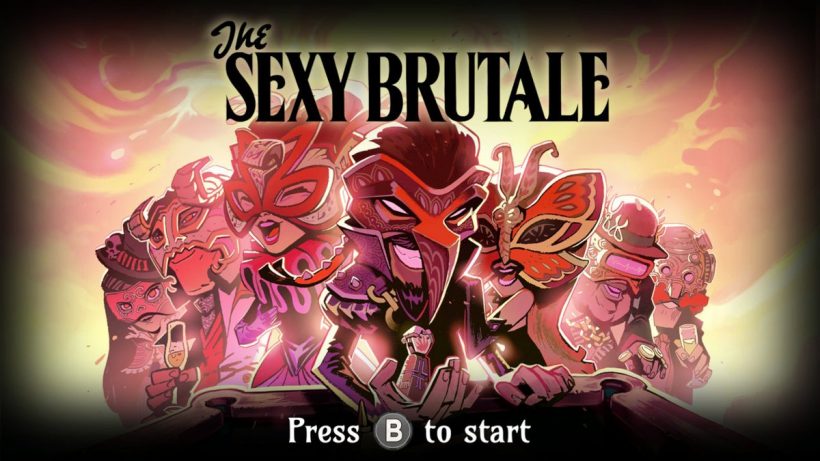 Did any of you reading this happen to see Happy Death Day at the cinema at around Halloween this year? The premise of the film was very similar to that of Groundhog Day, with a mechanic of reliving the same day over and over with the main character having the opportunity to change the course of history. Happy Death Day saw a grisly murder at the end of each day, as the protagonist did their utmost in order to avoid their impending fate. This bears a great similarity to what we have on offer in The Sexy Brutale.

Each day, you wake up and bear witness to the same set of events taking place at the same time every day. For every character and conversation you bear witness to, a record is made on your map, so you can plan your exploration in advance ahead of your second run at the day. Some characters will pick up items in one room before setting off on their path and hiding or depositing them elsewhere. In other cases, you’ll be able to pick up items before characters manage to reach them, or you’ll be able to pick something up after it was left behind. It’s always best to keep watch on every character throughout their entire journey through the mansion.

Unfortunately for the characters, the series of events will end in their grisly death, unless you can solve the mystery of whatever it is that happens earlier in the day that sets their death in motion.

The eight chapters of the game are woven together beautifully. You’ll see characters traversing their way around the mansion even if you aren’t currently on the section where you have to work out how to save them, and you’ll be able to listen into their conversations and make a note of their actions in preparation for later. It gives the mansion a great organic feel, and when you’re going to be spending up to ten hours playing this from start to finish, it was essential that the developers built up that personality in such a short space of time. If you like reading your murder mystery novels and watching similar films, you really will love this.

It’s all very clever in the way that it all works, and will have taken an impressive level of planning on the behalf of the game’s writers. Different things are going on in different rooms of the building all at the same time, so you will need to play the same day through over and over to get the fullest picture of events. Keep track of where characters are going to be at certain times of the day and you can take in their full timeline, and you can suss out the killers, the victims and the items which are crucial to their stories.

Items play a big part in solving the puzzles offered by the murders. The very first tutorial will have you switch the bullet in a loaded shotgun with a blank, shocking the murderer when he finds there’s nothing to kill his victim and therefore saving the victim’s life. That’s all the spoilers you’re going to get here though, as I wouldn’t want to ruin the more satisfying puzzles. Each character wears a mask, and you can’t enter the same room as any other character or their mask will stop the flow of time and start chasing you down.

Instead, you’ll have to tactically move to adjacent rooms and peek through the keyholes to see exactly what’s going on. This is another instance where knowing a character’s path will benefit you – you know when to run around the door and take cover, perhaps in a wardrobe, so you can hide while still taking in bits of their story you haven’t seen yet. You’ll also have to try viewing the same set of events through different doors in order to take in different angles so you can work out exactly who’s in each room.

When you do save a potential murder victim from their fate, they’ll remove their mask and allow you to take possession with it, opening the door to new abilities for yourself to progress to other areas of the mansion. Without too many spoilers, one character is able to eavesdrop into quiet conversations in the room next door to pick up vital information, while another is able to see ghosts which block the way of those who can’t. These all come in very useful in negotiating the mansion.

The visual look of the mansion and the moving from room to room is very reminiscent of Luigi’s Mansion, and that is definitely a good thing, as very few games have done a better job of providing an exploration experience inside such an empty space. But sadly, The Sexy Brutale suffers from slowdown where Luigi doesn’t – especially when travelling from room to room. It’s understandable to a degree – there are a lot more things being loaded as all the sequences of events throughout the building are in motion, but it is a frustration when you’re faced with a static screen for an extended period of time while the game renders everything that should be going on around you. The music is bouncy and catchy, with plenty of jazz, and fitting of the casino mansion setting.

I had a load of fun with The Sexy Brutale. You can feel just how lovingly all the storylines and events are put together, and there’s some really good storytelling going on. It would be great to see more games from this genre – satisfying puzzle-solving coupled with murder mysteries that certainly aren’t forgettable. It’s like a mix of the best parts, in my view, of Luigi’s Mansion and Majora’s Mask, and I love it for that. Those are two of the best Nintendo offerings ever, and this is perhaps the best indie offering on the Switch so far. Spend your eShop money on this one.

Let down only by slowdown, The Sexy Brutale is a load of fun. It’s got that Scooby-Doo-like magic to it, that sense of achievement when you solve the puzzles and save the day. Atmosphere is good, music is good, as is innovation – without the slowdown, it would be perfect.