If something feels awfully familiar about Blossom Tales fear not you’re not alone. To say this game wears its inspiration on its sleeve is an understatement, Blossom Tales carefully studied its inspiration and then just straight up hit that copy and paste button like there was no tomorrow. Thankfully for us, it’s taking inspiration from the great The Legend of Zelda: A Link to the Past. Your quest starts as you join the Rose Knights but as you’re initiated the King is put into an eternal sleep by his evil brother. Your task is to travel the world to find a cure for the King and put a stop to the evil brother in the process. It’s all very traditional but as the story is being told by a grandpa to his grandchildren the game takes the opportunity to put its own spin on proceedings – occasionally you’ll be able to make little choices such as which enemies to fight or what boss you’ll face. It’s fun and adds a little charm to what would otherwise be a paint by numbers tale. 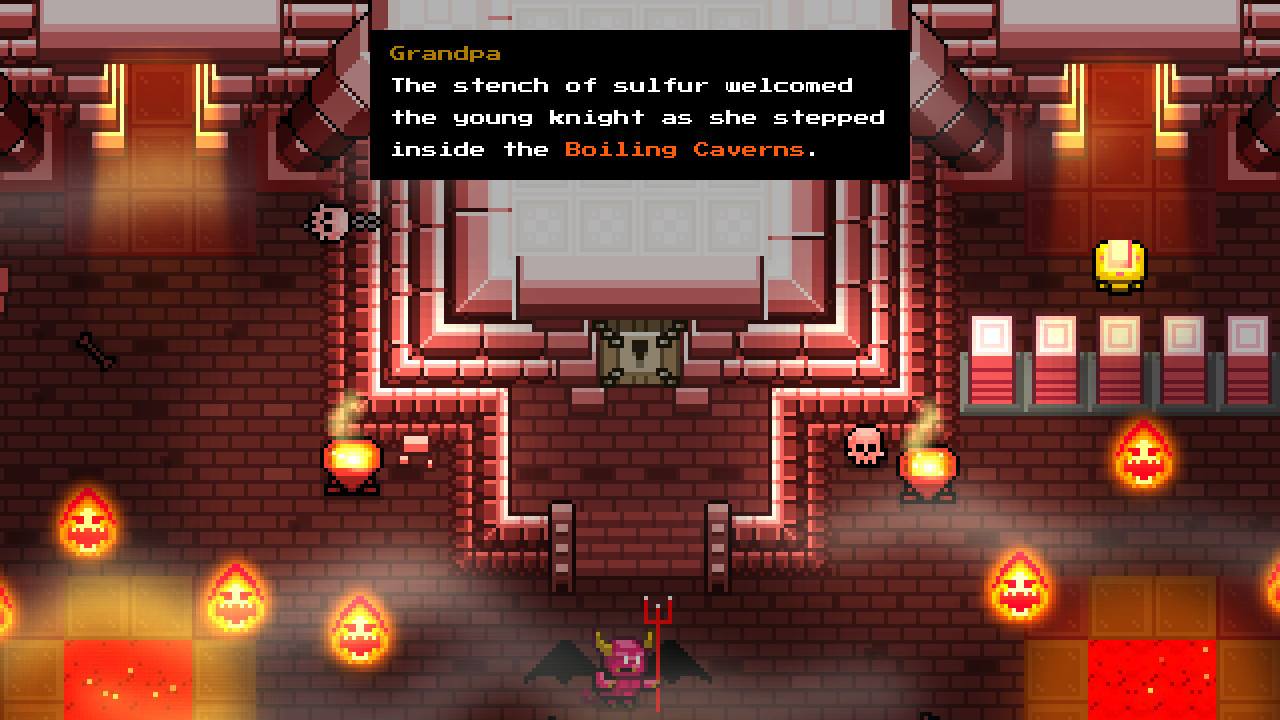 Gameplay-wise things will feel very familiar, armed with a sword you fight your way through dungeons clearing puzzles and finding secret rooms. The dungeons are lengthy and offer plenty of challenge; the first dungeon alone introduced the bow and begun utilising it in various ways from shooting distant switches to lighting up torches to open doors. The puzzles slowly grew more complex as more layers were added throughout the game giving a nice difficulty curve. More often than not though it was the enemies that gave the most challenge. In the early game when your health bar is pitiful and your arsenal limited the enemies can seem overwhelming – with giant rock golems taking a while to whittle down or evil trees picking you off from afar. Thankfully as the game progresses you learn to cope with the various enemies and even when new ones appear you know how best to approach them. 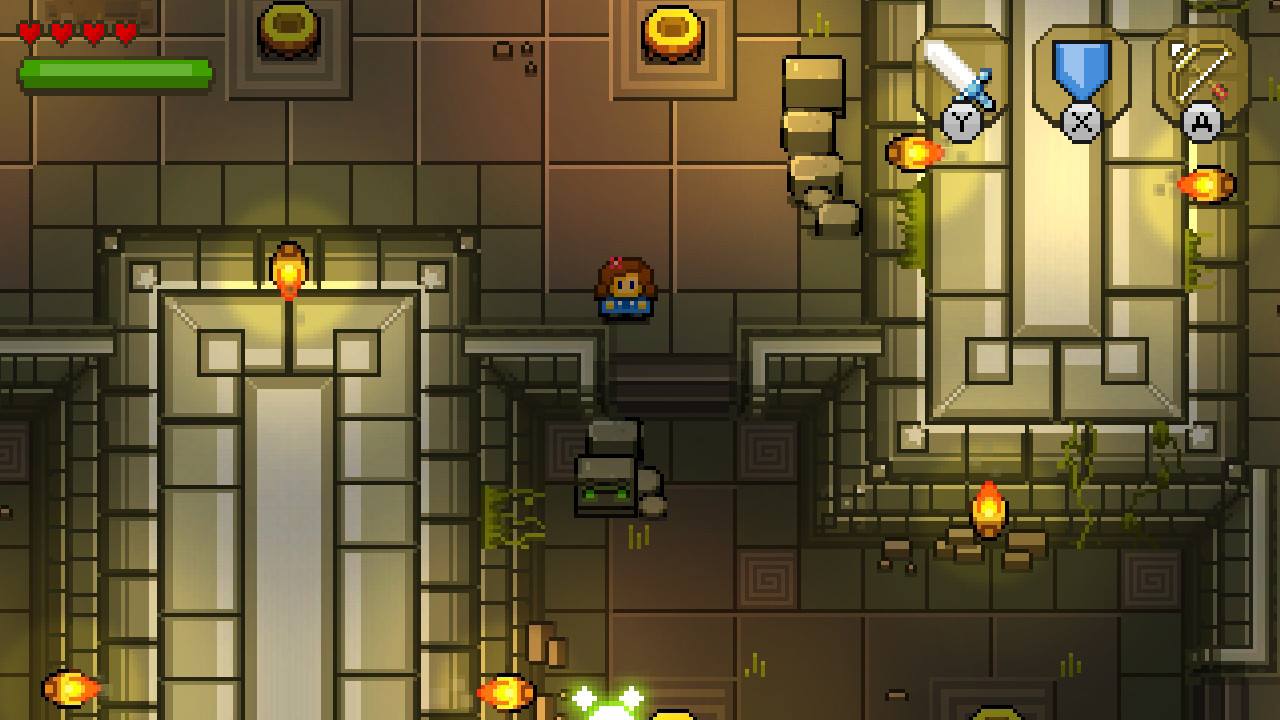 The game rarely seems unfair, bar one scenario involving an evil tree and a floor tile puzzle that still makes my blood boil but I digress. Even if you die, all the rooms you’ve opened and enemies you’ve defeated will stay completed meaning death is barely a minor set back. In fact with this in mind, it seems even stranger how the game handles checkpoints. Dying can sometimes send you back several rooms but with no puzzles to do or enemies to fight you simply have to walk back to where you died, it’s an irritating trip, especially if you die often. Considering there’s no challenge, why not make checkpoints more frequent? It’s strange but hardly a deal breaker. 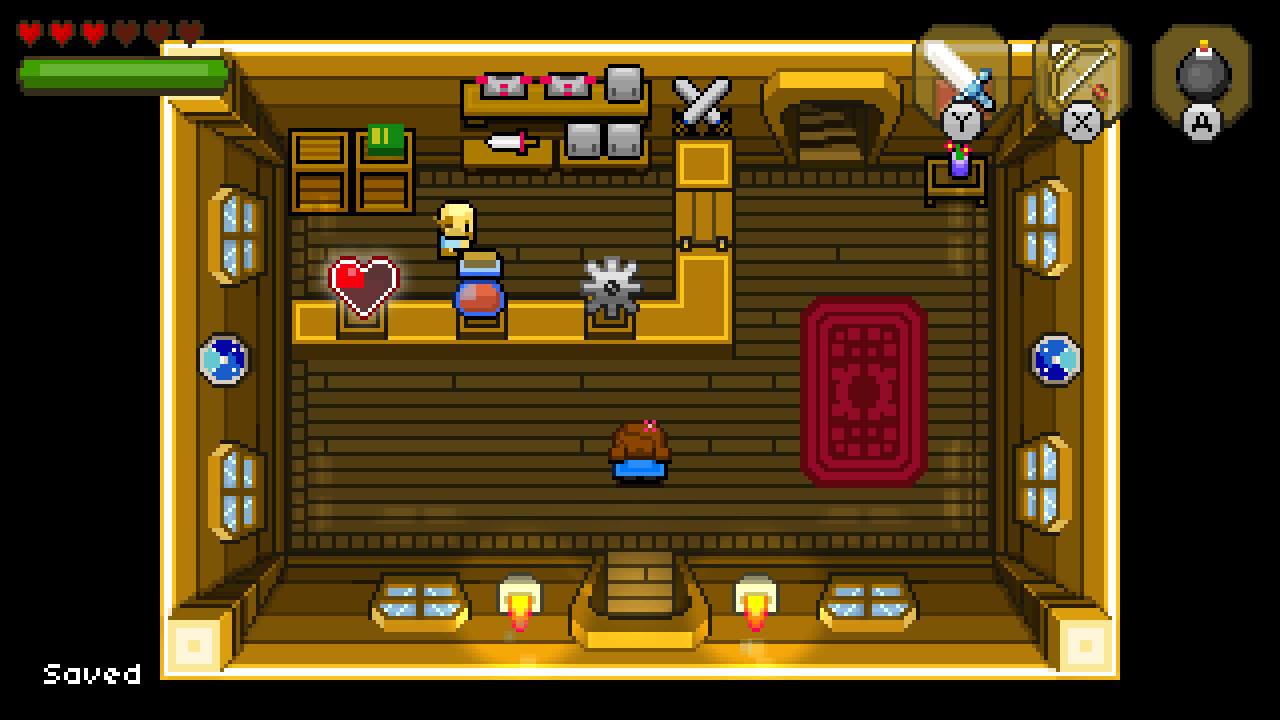 Visually the game can look a little stale, mimicking the oh so popular pixel art style found in a few indie games out there. There’s little here to delight, enemy designs and locales are all run of the mill affair and the locations are all inspired (read: taken from) Zelda. Thankfully the game manages to adapt the rest of the Zelda formula really well and, as a result, we get a fun game with enough of its own charm to be worth a look in.

Blossom Tales takes much of it’s rule book straight from A Link to the Past and manages to adapt relatively well. Whilst the game lacks some of the polish and charm of it’s inspiration, it doesn’t stop the game from being good in it’s own right.

One thought on “Blossom Tales: The Sleeping King”