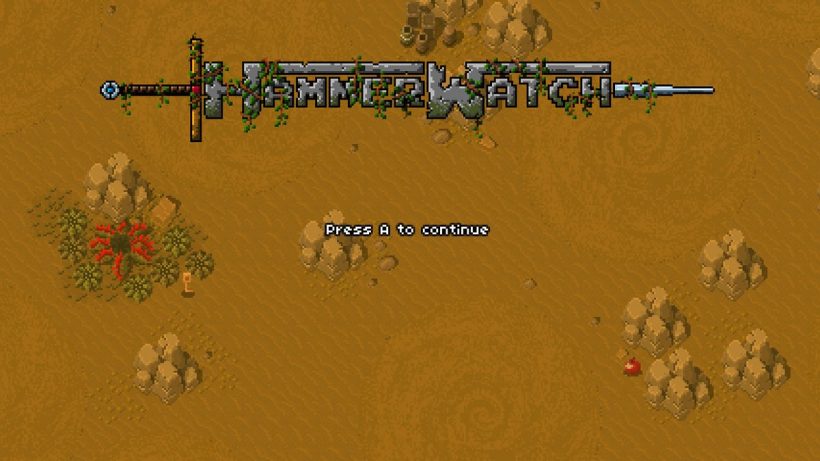 Hammerwatch is a game which combines RPG elements alongside dungeon-crawling and twin-stick shooting.

It’s a game that really does work far better when you’ve got a friend involved for co-op. Exploring through the dungeons do evoke memories of classic titles of many years gone by – there’s a bit of Zelda touched upon, but there’s a bit more of a swarm survival mechanic at play here, where you’ll find there will often be far too many enemies to stay on top of. Health top-ups are at a premium, but shop NPCs are located around the place offering upgrades and advice.

Aside from Castle Hammerwatch and Temple of the Sun, two modes which are your main campaign options, there’s a survival mode which has you, as it says on the tin, seeing how long you can last against all the enemies. There’s not a lot of variation here to the gameplay that we experience in the normal modes. Hero Defence, meanwhile, is more like a king of the hill sort of tower defence experience – stop all the enemies from making their way as far as a certain point. It was the latter which I had the most enjoyment with – the exploration of the main modes can become pretty tiresome if you don’t know where you’re going, and when the map is displayed over the actual dungeon while you’re moving, it can all get really confusing.

The thing that I just couldn’t quite overcome was that the formula of move, swipe your sword, move, get overpowered by hundreds of enemies and then go back to the last save point got so repetitive, and it wasn’t one of those frustrating-yet-satisfying game overs that implored me to give it another go. Things get a little easier when you figure out your best mode of play – be it a sorcerer, who can cast spells which have the effect of projectiles, a ranger, a warlock, a thief or a series of others, all of which have their uses but which are mostly more suited to group play than they are if you’re on your own. You have the chance to form combos with your attacks, which is a lot easier if you don’t pick one of the melee characters, but at least offers a bit of skill.

There’s not a lot of graphical work at play – the sprites all seem fitting of the setting, and overall it’s a dark environment which does well to create a cramped sense of mazes. It is impressive how they’ve managed to get swathes of enemies all bearing down on you without any sense of slowdown, however; performance-wise, there’s nothing to find fault with here.

There’s an online feature to come in the future, so the version of Hammerwatch in the eShop at the moment is not the full package. The option of being able to take on the dungeons with people all across the world at your convenience though is certainly an attractive one, and evokes images of something along the lines of the old PC dungeon titles that awed everyone by showing us all what network multiplayer could do. Luckily, online will be a free update.

Until that comes, though Hammerwatch is a solid if unremarkable offering.

With online still to come, there’s a bit more that Hammerwatch has to offer in the future. But I just couldn’t take enough charm or personality from the game to make it stand out, especially when that eShop to-play list just keeps on growing…