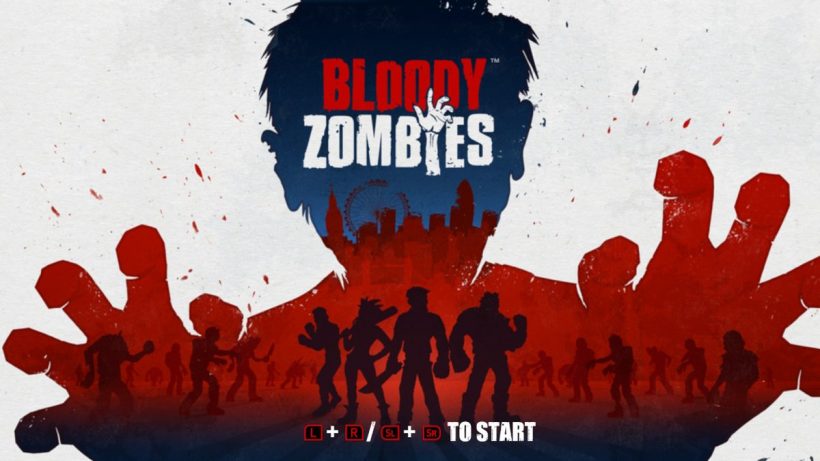 London’s calling… for help, because it’s been infested by zombies again

We’ve never really had a golden age of the beat-em-up since the days of the SNES. Nintendo’s second home console had tons of them – Battletoads, Final Fight and Mighty Morphin’ Power Rangers were amongst the most memorable. Can Bloody Zombies offer anything to change the fact that we really don’t get these top-level games in the genre anymore?

In short, not really. What we have here is really a pretty standard beat-em up. On each level you’re walking or running from left to right, with a series of barriers preventing your progression until you’ve cleared out all the enemies from the section that you’re in. Your standard enemies are varied – all are zombies, of course, but some will throw projectiles at you, others will explode, others will have spikes protruding out of their bodies which can spear you at any moment, and a lady who cracks a whip. All can cause you some trouble if you’re not nifty enough with the controls, but they aren’t too hard to master.

Hitting the Y button will have you throw your standard punch, while the Y button will deliver a stiff uppercut. A mixture of the two will help you perform combos, all of which contribute to your overall score. There’s also a special move which you can do which involves clubbing opponents with objects that you find on the floor, but for some reason the controls for doing this are unnecessarily complicated. You’ll need to hit the directional buttons forward and then quickly back before hitting the attack button in order to pull it off. It often doesn’t work when you want and need it to, and it just needn’t be this way, especially when you have spare buttons on the Switch controllers to make use of.

Fortunately, for all the time that you send walking backwards and forwards like a loony trying to make the move work, you can evade oncoming enemy attacks by making use of the ZL button to roll. It doesn’t work on everything, though – you’ll still collide with objects in the environment which can take away your health. There’s also B as the jump button – but it’s not of much use.

The visual presentation is very pleasing – the visuals are deep and yet crisp, and in terms of the impressiveness of the visuals, Bloody Zombies has not much you can find fault with, despite the cartoon cel-shaded style slightly unfitting of the zombie apocalypse. But what is an issue with it is depth perception. As is the case with any side-scrolling beat-em-ups which include up and down directions, it’s often tough to guess exactly where you need to be standing to make contact with the enemy, and I found myself delivering far too many air shots for my liking.

Playing levels through again, you’ll be kept playing in order to find the secret rooms along the way, but there’s not a lot of rewards for this apart from items and personal satisfaction. Grabbing a friend for co-op action is fun, it must be said, but it doesn’t have that same magic feeling to the SNES games I mentioned above. Buy it if you’re a huge fan of the genre, sure, but don’t expect to be remembering this one in another twenty years’ time.

Despite some lovely visuals, there’s not a lot of depth here to make Bloody Zombies memorable. Perhaps it’s down to the limits of the genre in this day and age, but it’s not a game you’re going to be remembering long into the future.