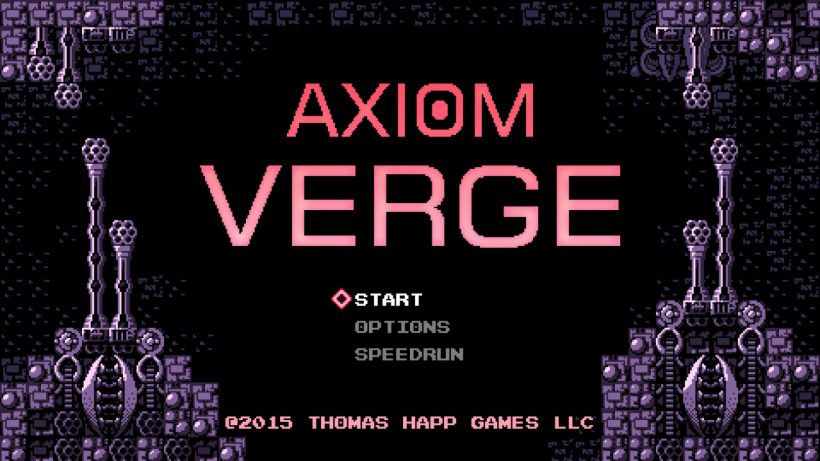 Axiom Verge starts off with a storyline that could easily have been lifted from Another World. The protagonist, Trace, is caught in a lab accident that somehow zaps you to the remote world of Sudra. It is here where you awaken to find a voice guiding you onwards. At this point, it doesn’t feel that the game is redefining the genre, and sets up some familiar tropes. Soon enough you’re thrown into a very Metroid-feeling world and the game sets off. Looking at the screenshots, you could easily convince yourself that this is just an 8-bit Metroid rip-off. It certainly apes the classic NES title in many ways – in good ways – that helps to fuel those nostalgic synapses. You’d be forgiven for thinking that Trace has been dropped right into Metroid’s opening area Brinstar. The only thing missing is the morph ball. 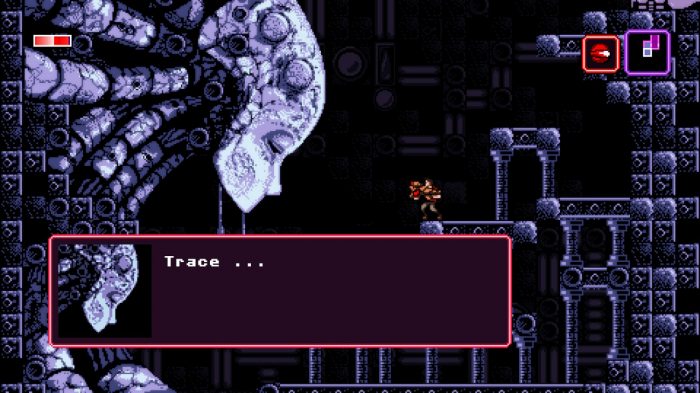 The audio and visuals are startlingly 8-bit. The different areas found in Sudra have a clear look and feel by having their own audio tracks, colour palettes and art-styles that give you a clear definition of where you are in this world. It’s easy to get lost in Sudra’s labyrinthine caverns, so having a clear awareness of your place is vital. Though the media is 8-bit in style, Axiom Verge smartly augments everything with very modern effects. Trace’s weapons create ripples in the world around them as they impact while the Sudra itself takes on eerie transformations as plot events happen. None of this is in your face – it’s done with subtlety and care to make it feel crafted as opposed to just being there because it can be. The music and audio effects also have the same level of care. They sound retro without grating on you. The music is not only distinct but effectively used as well. There are moments where eerie silence is more effective than any music could be, and Axiom Verge nails this too. 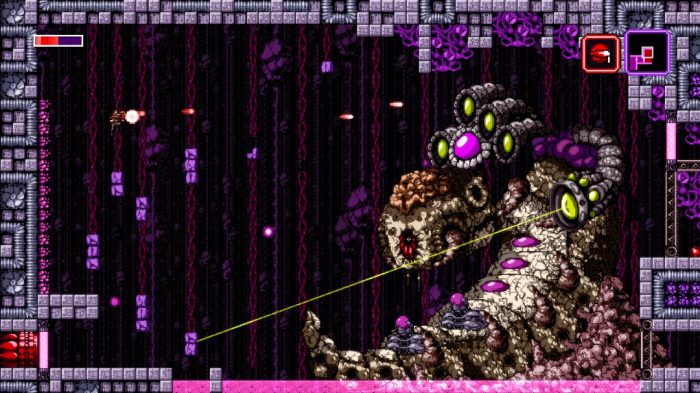 When it comes to progression, the game follows the classic Metroidvania formula. You collect power-ups along the way which help you traverse previously unbreachable barriers. Key powers are protected by boss battles that test both your reflexes and your ability to assess the best approach to each battle. As you journey through Sudra you are given dialogue and find notes that build-up the story. This is expertly done as the story slowly unravels, becoming much more involved and existential than you’re initially led to believe. The power-ups themselves are varied and inspired. You soon gain abilities that let you manipulate the world around you by ‘glitching’ the game. You can alter enemies and unlock paths that feel like you’re entering some strange, raw world within the game’s code. And you know what? It makes you feel bad-ass. 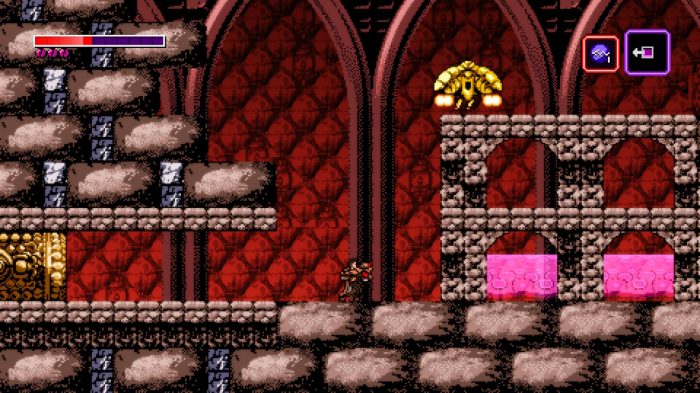 It’s these mechanics that make exploring Sudra so satisfying. Solving the puzzles and finding an item that is out of the way gives you a rush as you genuinely feel like you’re the only person who could have made the discovery. The feeling is a reward in itself, but it’s doubly-so when you are rewarded with an awesome weapon that you would have never received if you didn’t allow your curiosity and lateral thinking to get you there in the first place.

This kind of lateral-thinking is the key to success in Axiom Verge. The powers that Trace can wield are varied and allow for some clever and tricky maneuvers. Without wanting to give too much away, there is a weapon hidden behind a wall in the air in one particular stage. You need to pull off a sequence of three different techniques in a single jump to break in. Of course, you can carry on without the items but the game is much tougher when you consider all of the hidden health and weapon buffs that you may miss along the way if you don’t try. 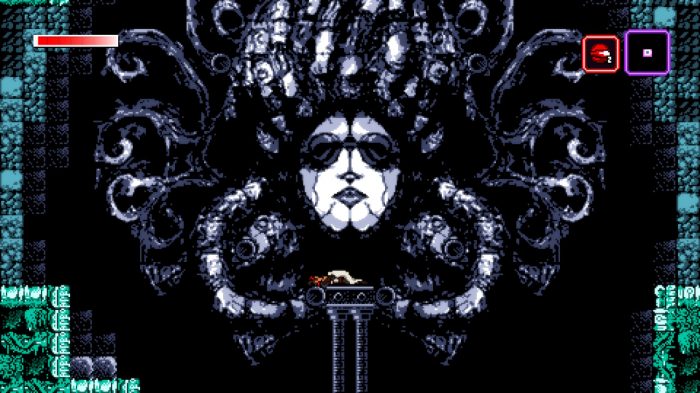 Probably the most challenging aspect for modern gamers will be the absence of waypoints. The map is only revealed as you explore Sudra, and you are given no assistance as to where your next objective is. You’re alone on an alien world and this game is making sure that you know it. There were two moments where I found myself scratching my head and wondering where I was meant to go next. The first was mid-way through the game when I found I could no longer backtrack to the beginning. I was worried that I was missing something obvious and would be trapped in the specific area. Eventually, I found the item that would enable me to move on. The second time was near the end of the game, I had most of the power-ups but couldn’t find where I needed to go for about 2 hours. It was equally frustrating and rewarding. Rewarding because I could go back and break into areas that I’d passed by before. Frustrating because I kept revisiting areas wondering if I was ever going to find the way forward. The progression through the game is not only gated by the need for Trace’s abilities but the enemies you encounter. As you approach the game’s final goal you are faced with more powerful enemies that do severe damage to Trace. You’re constantly learning their movements and trying to find the best way to tackle or avoid the foes that you encounter. It’s as much about learning confidence and skill as it is about having an even more powerful gun.

Trace’s techniques open up many possibilities for speedrunning. So much so that the game even incorporates a speedrun mode on its main menu. This removes any randomness from the game, leaving you on a completely level playing field with your speedrunning peers each time that you plough through.

The most extraordinary thing about Axiom Verge is that it was single-handedly developed by Tom Happ, who has a career working on triple-A titles. What started out as a hobby project has become one of the greatest Metroidvania titles I have ever played. Everything comes together beautifully as the nostalgia you experience at the beginning of the game is slowly replaced with joy and amazement as the game is constantly redefining itself through the story and the action. 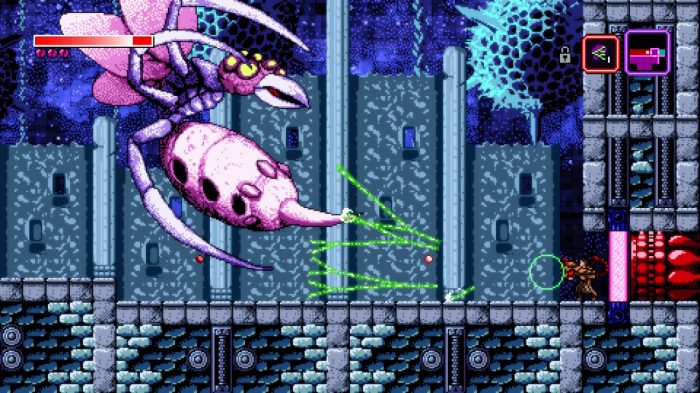 Axiom Verge is ultimately a masterclass in modern nostalgia. It not only plays as your memory believes that Metroid did, but it goes so much further. It nods appreciatively to the NES classic, right down to the legendary “Justin Bailey” code while not just improving on, but constantly innovating as you make your way through the alien world.

This isn’t a game for the faint-hearted. It’s a challenging action adventure which forces you to use physical and mental dexterity in equal measure. It wields nostalgia and innovation with laser precision, creating one of the most fun and inspiring games that you will have the chance to play. If you want an excellent adventure platformer, then it would be a disservice not to own this game.