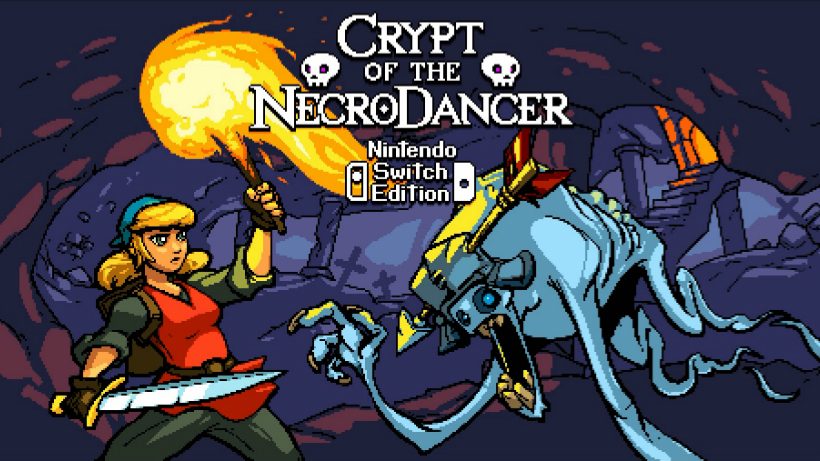 Same as it ever was.

You there! Yes, you blowing on those Donkey Konga bongos. Do you fancy yourself a musician? I don’t. The limits of my bardic skills extend to strumming the opening bassline of The Human League’s The Lebanon on a rubber band stretched around a margarine tub. But, my friend, I can still hold a tune. Just in a very bare-bones way. Yet that’s all the talent you’ll need to rock along to Crypt of the NecroDancer: Nintendo Switch Edition.

Three years after Crypt of the NecroDancer hand-jived onto PC and Mac and two since it shimmied in the direction of PS4 and Vita, Brace Yourself Games has plucked up the courage to ask the Switch for a dance. The combination of rhythm-based action and procedurally generated dungeon-crawling is still as intrinsically fun as it is on other platforms. Unfortunately, the Switch version of Crypt of the NecroDancer also suffers from the same limitation as the rest of its non-PC cover versions: a finite number of soundtracks. At least you’ll be well served if you’re into chiptune, metal or, erm, more chiptune. 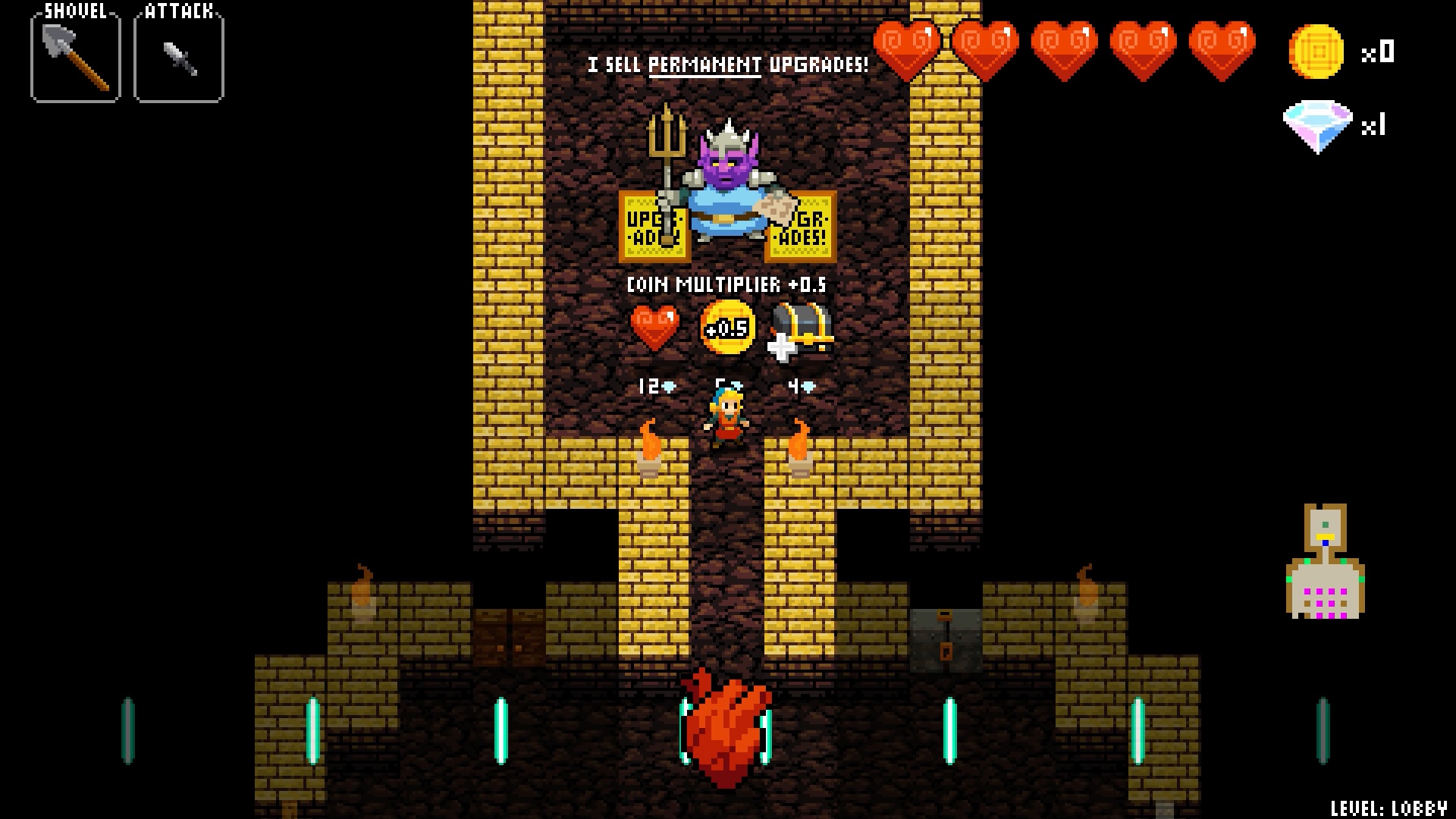 Adventurer Cadence has been struck down on entering the titular deathly domicile of said NecroDancer. Her heart is taken as a forfeit, and she must boogie to its beat through the Stygian ballrooms to reclaim her ticker. That’s the basic motivation for Crypt of the NecroDancer‘s rhythm action. It isn’t overly complicated and takes up the entirety of the pretty short intro cut-scene and tutorial to put across. Then Cadence is dumped into a lobby where she can use coins and diamonds she collects on her dungeon-crawling expeditions to buy helpful items and buffs from various shopkeepers, select characters with alternate modes of play, and choose what zones she wants to explore. Many of these options are unlockable through dungeon exploration so there’s plenty of reason to keep doing the hustle.

One of the most significant features of the Nintendo Switch version of Crypt of the NecroDancer is its local co-op mode. Bust out your Joy-Cons, Pro controllers or grips and two players can pair up to delve into the dungeon’s dancefloors. It’s a nice feature to try out if you fancy an evening’s dancing with your partner but don’t have enough room for an Argentine tango. Switch owners are also treated to the extra zone, soundtracks, characters and other added content from the Amplified DLC that was released separately on other platforms. It’s just a shame that first-time players might feel put off initially when they’re dropped straight into the lobby area with minimal instruction after starting the game. 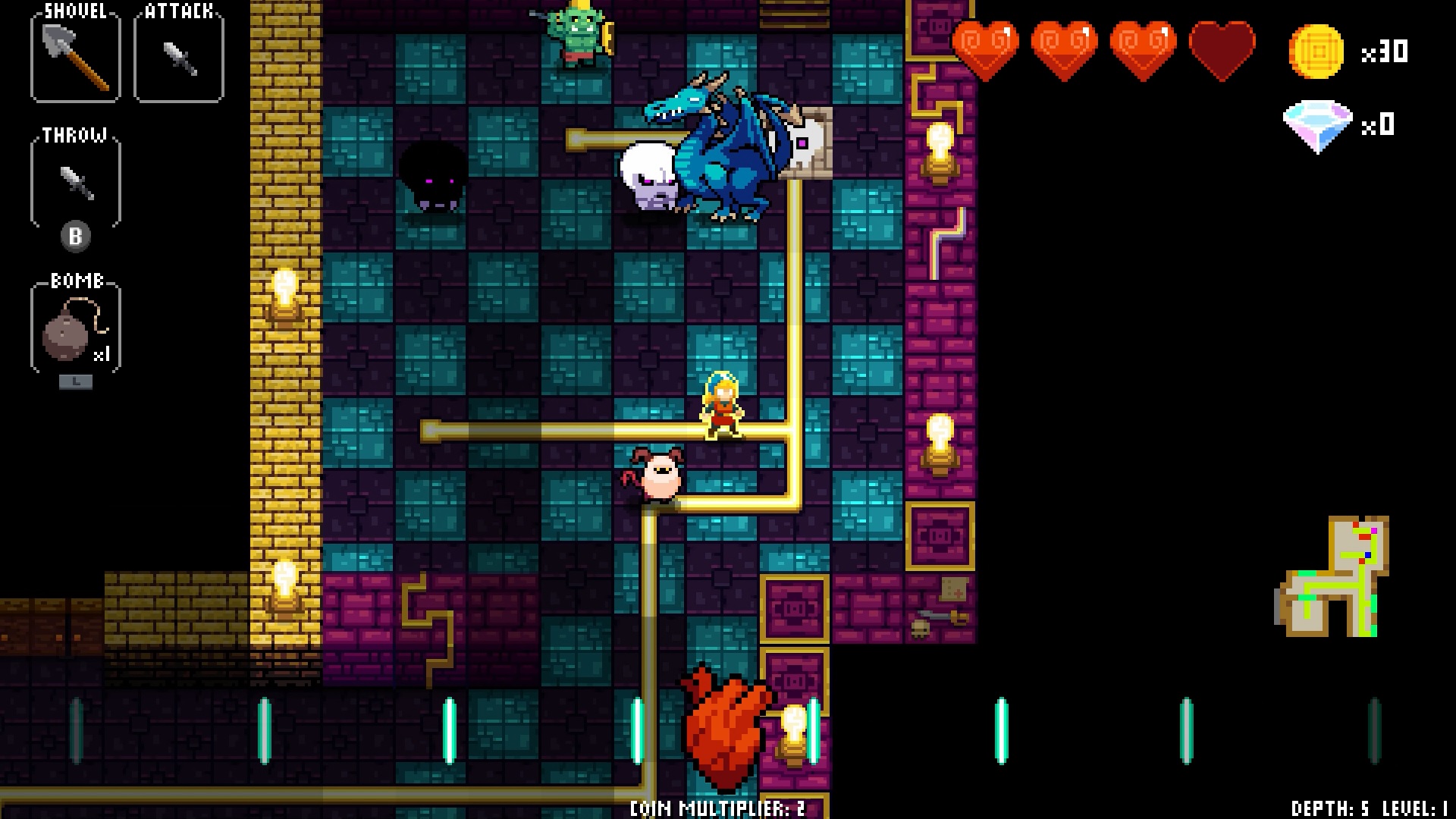 Brace Yourself Games has crafted one of the finest rhythm experiences on Switch so far; Crypt of the NecroDancer is certainly worth a spin if you’ve missed it on other platforms. There’s plenty of modes and characters to choose from, and a supergroup’s worth of soundtrack options to play along to thanks to the addition of content from the Amplified DLC. Only the obvious absence of the ability to play your own music holds Crypt of the NecroDancer: Nintendo Switch Edition back from being the definitive version.

Crypt of the NecroDancer has risen once again to bring a hefty amount of rhythm action goodness to Switch. If this is your jam, then its definitely worth picking up again for portable and local co-op play. If you haven’t played before and aren’t sure if you’ll dig it then the Switch version is a content-rich way to give it a whirl and find out.

One thought on “Crypt of the NecroDancer: Nintendo Switch Edition review”