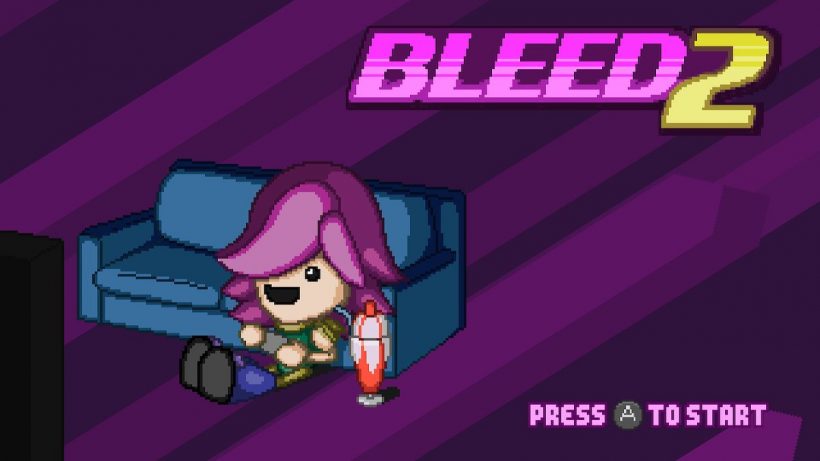 If you played the first Bleed – it only released on the Switch eShop shortly before the turn of the year – you’ll know what to expect in this sequel, which offers more of the same, both in terms of gameplay and presentation.

The twin-stick shooting platformer has you jumping through most levels and floating through others, dodging all kinds of hazards while focusing on pushing the right stick towards the enemies to shoot them. Jumping is done with ZR, and a second offensive move, the katana, is used either by moving the right stick when standing still, or by pushing the R button when on the move and gunning.

This adds an extra element to the battling – most of the bigger enemies will utilise attack beams in both purple and yellow colours. The katana is only effective against the purple beams, and you’ll have to judge your jumping to be able to reflect it back towards the enemy it came from. The trouble is, you’ll have to continue to watch out for the yellow beams as you’re doing so. You can also slow down time at points using ZL, and that’s particularly important against the bigger enemies which have a more rigid defence system.

The action is rapid and the enemies come at you hard and fast, although it felt that the amount of time you spend shooting your way through the levels was almost equally matched by the time spent on boss battles. There really are a lot of them for what it a quite short game to play through from start to finish (about an hour and a half, provided you don’t come too unstuck against the bosses). Each were quite easy to figure out, mostly involving simply firing in the direction of the boss at every opportunity you get, but all boasting their own slightly differing pattern of dodging attacks. Highlights include a flying robot shooting missiles in the sky, and another set-piece which has you taunting using the A button to get the upper hand.

The use of health is a bit of an annoyance. You have a set amount as a full bar at the start of each level, but with so many mid-level bosses at play, there’s no much-needed top-up of your health bar after you successfully defeat them. Even the most adept players will take some damage when battling the bosses, so it was often the case that, immediately after that boss fight, I would be killed by a trivially small enemy simply because I only had a minute level of health left. Yes, you do get to restart immediately after the boss as the game records its own checkpoints throughout the level, but it would be nice to get a more realistic chance at taking on the full level in one fell swoop.

Despite this, I found that the difficulty level was not quite as high here as it was in the first game. Being able to pick off the bosses in a maximum of three attempts probably chopped quite a bit off the play time in comparison with the first game. You can up the difficulty and unlock new weapons, though, so at least there’s content once you play through the seven levels.

Bleed 2 offers good, frantic twin-stick shooting fun, but it would have been nice to see a few more levels and a bit more depth to the game beyond the frequent boss battles. Taken with the first game, though, Bleed is a fun package.