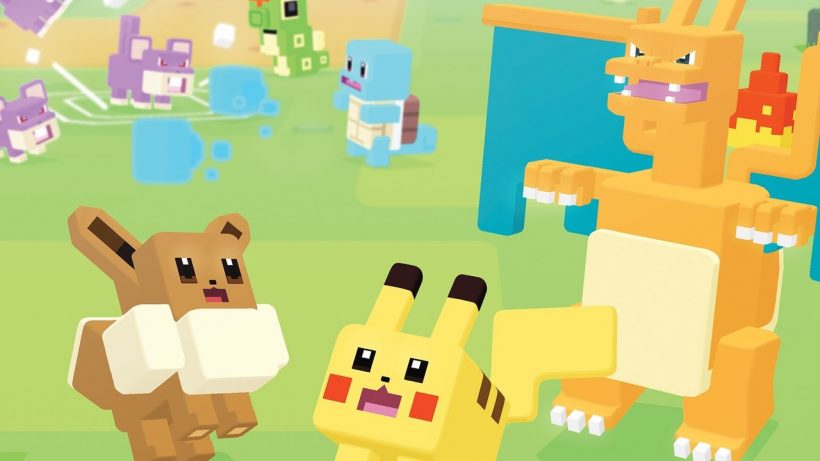 Let’s go on a Quest…

We’ve got a big week for Switch releases, folks! Heading up the list, we have the delightful free-to-start game Pokémon Quest, followed by the iconic shmup Ikaruga and Capcom’s fighting compendium Street Fighter: 30th Anniversary Collection. Take a peek at the full list below…

Welcome to Tumblecube Island, where everything’s a cube – even the Pokémon! Set out on expeditions to achieve your goal of finding the precious loot that lies hidden all over the island.

A rebel pilot named Shinra must battle an enemy nation using a specially-designed fighter called the Ikaruga, which can switch between two energy polarities (black or white) at the touch of a button. Bullets that are the same color as Shinra’s ship can be absorbed, while the opposite color will do damage – this polarity-switching mechanic is the game’s core feature and the foundation for its stage and enemy design.

Flip and bump our pint-sized protagonist around the stunning hand-painted island on your quest to rebuild the post-office, and wake an old god from its deep slumber.

Die for Valhalla! is an action RPG where you possess and take full control of heroes, monsters and other things to help Vikings save their realm!

Sadistic robots have enslaved orcas at SeaLand Marine Park. The evil Sheep Puncher robot has kidnapped sheep for the twisted wool industry. Only the Kitten Squad is up to the task of saving these gentle animals. Players must guide the Kitten Squad, armed with weaponry ranging from carrot rocket launchers to yarn ball guns, on missions to defeat the evil robots and free the animals in this action game brought to you by PETA.

Set out on a grand adventure in this turn-based, retro style, pixel-art RPG, inspired by the great titles of the 90’s. Take on the roles of in-game players taking on the roles of their characters in a traditional pen and paper RPG session in the ultimate meta roleplaying experience.

In the acclaimed tower defense series’ official follow-up, play as Tikiman and build towers to protect your Tiki Hut from the fiendish monster hordes.

Connected to the cyber-noir action-puzzle platformer, you will be tasked to solve puzzles and create negative space by inverting the world to transform barriers into escape routes.
Shift the world, twist your environment, bend your mind to unveil its secrets and solve each brain-drilling level.

Join immortals John Yesterday and Pauline Petit in Yesterday Origins, and experience an epic adventure through time and across the world in a story full of intrigue and unexpected twists.

6180 the moon is a platformer game with a unique mechanic. It offers a fresh, unseen game play style by connecting the top and bottom of the screen. This allows in a mechanic with delightfully long jumps and no fear of “slipping” to death.

“NINJA COMBAT” is an action game released in 1990 by SNK. In order to defeat the evil ninja clan KAGE ICHIZOKU, justice-seeking ninjas head towards the NINJA TOWER. Enjoy battling with a wide array of weapons and ninja magic as well as the ability for a friend to join the action.

The young characters and the old woman, who met through an unfortunate accident, eventually open up and the youngsters end up visiting the woman at her house as friends.
One day, when they are headed to the old woman’s house as usual, they are suddenly hit by paramnesia. When they wake up, the woman’s house looks different to what they knew.
Under fear of being watched by someone, they begin their puzzle-solving journey for survival.

Explore a giant world made of blocks and modify it with your own creations. Construct houses, build entire villages, cities, monumental constructions or dig deep underground.
Place torches or design complex electric circuits to light up your creations in the dark and enjoy beautiful day and night cycles.

ICEY is a 2D side-scrolling action game. As you follow the narrator’s omnipresent voice, you will see through ICEY’s eyes and learn the truth about her world.
“ICEY is a Meta game in disguise. The narrator will constantly urge you in one direction, but you must ask, “Why? Why am I following his directions? Why can’t I learn the truth about this world and ICEY’s purpose here?” Fight against his tyranny, and uncover what’s really going on for yourself!

Lost Sea is an action-adventure game set inside the Bermuda Triangle. Recruit a crew of survivors who can help you explore the hazardous islands as you hunt for the artifacts needed to navigate the Lost Sea.

Inspired by the Italian crime flicks of the ’70s, Milanoir is a pixel-packed action game set in the violent city of Milan. Meet Piero, a convict suddenly released from prison looking for revenge over the man who framed him.

Join Pete Jr on his quest to defeat the nefarious Bubble Pirate, an evil villain who has trapped the innocent townsfolk in bubbles! Dodge and pop bubbles with your anchor while collecting power-ups and managing Bubble Pirate’s constant gravity-switching mischief!

In the far distant future, a mysterious alien race set its sights on the conquest of the Earth and the total annihilation of the human race. To counteract this threat the nations of Earth formed the EDC (Earth Defense Corps) and launched an all-out counter attack.
With enemy forces at the gates of the last fortress of the EDC, the leaders of Earth’s forces decide on a desperate course of action: throw everything they had left at the enemy’s headquarters. With the help of the erratically brilliant “Dr. AKEMI,” the goal is no less than the destruction of the very heart of the alien stronghold.

Smoke and Sacrifice is an open-world, narrative-driven RPG, where exploiting living ecosystems is the key to your survival. Craft, fight, survive and explore the huge open world in this beautifully hand-painted, gothic adventure where every character has their tale to tell.

Songbringer is a sci-fi action RPG with swords, secrets, dungeons, bosses and stuff. You play the role of protagonist and accidental hero, Roq Epimetheos. He cruises the galaxy with his skybot Jib aboard the ship Songbringer, searching for verdant planets absent the presence of galactic police. When Roq finds the nanosword hidden in a cave on Ekzerra, he unwittingly awakens an ancient evil…

Enjoy World Soccer Pinball, a reproduction of a real pinball machine, with all the graphic details and sounds. Discover all the secrets, complete all the missions and become number 1 in the world or the best among your Friends, posting your high score on the online leaderboard.

Return to the battlefield of Fenumia, where a besieged nation stands on the brink of war. See the conflict through the lenses of Princess Cecille and Legatus Laendur, one who would restore her kingdom to its former glory and one who would see a new nation rise in its place.

Help Joe and his fellas on their upwards journey. Be quick as a flash and dodge roaring cannonballs, vicious bats and other traps. Perform high scores or leave your competitors in the dust!

Dateline: Earth, 1999. An unprovoked alien invasion is underway. You, a total badass, don’t really appreciate it. You’re downright outraged. You pack up some essentials–guns, cigars, whiskey–and head out into the night. Little do you know that tonight you will make history. This is: Operation Hardcore.

Enjoy a fine selection of sport disciplines, ranging from the frantic and fast paced to the relaxed and playful! Invite your friends, foes and family to a game of fun competitive sports!