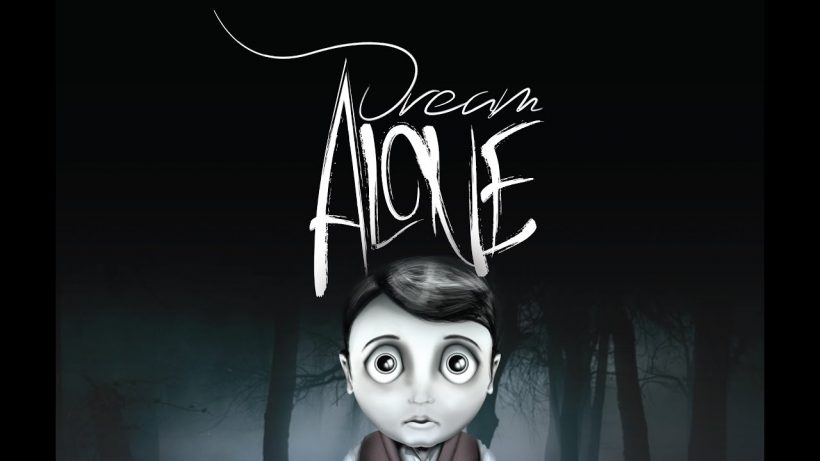 Wake me up when this one’s over.

Dream Alone has you playing as a young boy who has lost his family, and village, to a curse which has sent them into a coma.

You’re told – by a “magical bird” – that the only way to break this curse is by finding Lady Death, a mysterious character whose background we find out little about. Naturally, your character is the only one that didn’t suffer the same fate as the villagers.

The first thing you’ll notice is probably going to be the visuals. There’s definitely a Limbo vibe – particularly in terms of the use of the black and white illumination. But this game doesn’t feel quite as polished; though the mood-building effectively sets a tone of impending doom.

If you’re familiar with Mutant Mudds or Wonder Boy: The Dragon’s Trap, the gameplay here is very similar, but a lot more linear. Enemies in the game take the form of goblins, spiders or plant-type monstrosities, though it’s a simple case of jumping over them to avoid death. At various points you’ll encounter puzzle and plain platforming sections – it’s the latter sections which are probably the most frustrating sections in the game.

The problem is, everything feels very clunky. At the start of the game you’re told to watch out for traps; but you can’t actually see them. With everything in black and white, there’s no colours that make the obstacles you’re supposed to avoid stand out; they just blend into the scenery. If you’re playing in handheld mode it’s almost impossible to see where you’re going even with the brightness at maximum.

You’ve then got a whole host of unforgiving deaths which just feel unjust. At one stage, with no warning, giant steel beams come hurtling towards your head, with little time to react. This provides hours of frustration and countless deaths –  while some people enjoy that trial-and-error style gameplay, for me this quickly became a chore.

There are two abilities at your disposal which use separate magic meters; one grants you the power to enter an alternate dimension making hidden platforms and objects appear, and the other gives you the power to clone yourself, which is used to great effect in a few of the game’s puzzles. Thankfully, you don’t often run out of magic power for either and when you do need to use them there will be some potions lying around shortly before the sequence.

The puzzle elements of the game unfortunately feel uninspired, and mostly involve pushing blocks or activating levers. There are even a few cases where you must backtrack through the level to find out what the levers have done – without a clear indication of what you’ve just done. It’s a case of trial and error.

Dream Alone is split into various themed areas, including a forest, a cave and a factory. Throughout each of these stages you are provided with checkpoints, but the game doesn’t really notify you when you’ve passed one, so when you die it’s anybody’s guess where you’ll respawn. The factory is an exception; there are next to no checkpoints here, leading to some of the most frustrating platforming sections in the game.

A short game, you can finish this in around 3-4 hours. Just be prepared to die – a lot.

I really wanted to enjoy Dream Alone. Whilst it’s clear that certain aspects are inspired by the likes of Super Meat Boy, the platforming elements just don’t hold up as well. The unforgiving deaths and inability to see where you’re going most of the time makes the whole experience a bit of a disappointment.