I’m going to start this review with the one question we’ve all been asking: What is it with Nintendo and paint?

I ask because, in addition to the splodge-drizzled fun they’ve been able to refine with the Splatoon series, it was the Wii where I – and I imagine most people – encountered de Blob for the very first time. Every Blockbuster (I know!) I would enter, every game shop bargain shelf I would peruse this funny little game with a cheerful splotch on the cover would be winking at me. Only now, with the release of the Switch version almost ten years on, do I have my answer – but it’s nothing particularly special.

After all this time wondering, it’s at least heartening to know that the idea behind de Blob is as light and charming as one would expect. You, as the eponymous blob, are tasked with restoring life to the many districts and locations you venture through. The only way to do this is to soak up and splash as much colour as possible. Unlucky for you, doing so has been outlawed by INKT, an evil corporation who seem to get a kick of having Chroma City stay as grey as possible. Where’s the fun in that? 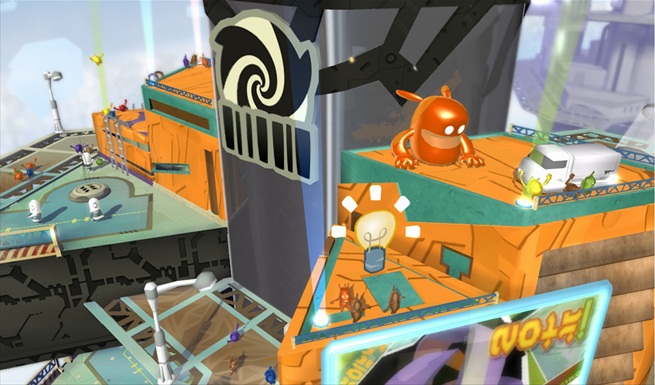 Despite being over a decade old, this whimsical puzzle-platformer plays and holds up quite well. As Blob the living ball of paint, you’ll find yourself liberating areas, building up points, and completing challenges by bashing into Paintbots – sentient creatures whose sole purpose is to give you the exact colour you need for the right situation. Doing so will see you rack up corresponding paint points, which empower you with the ability to colour the buildings surrounding you just by ramming them, homing in and crashing down onto any INKT agents standing in your way.

This is where much of the core enjoyment in de Blob comes from. It’s genuinely fun to see your actions having an impact on the world around you. With every jump, ram, bash, and slide, Blob breathes life into whatever environment he finds himself in, leading to a certain amount of curiosity if only to see how things have changed by the end. It’s because of this that I wish the platforming in de Blob was a little more precise, as too often at times did I feel myself hopping to the complete opposite direction I wanted. 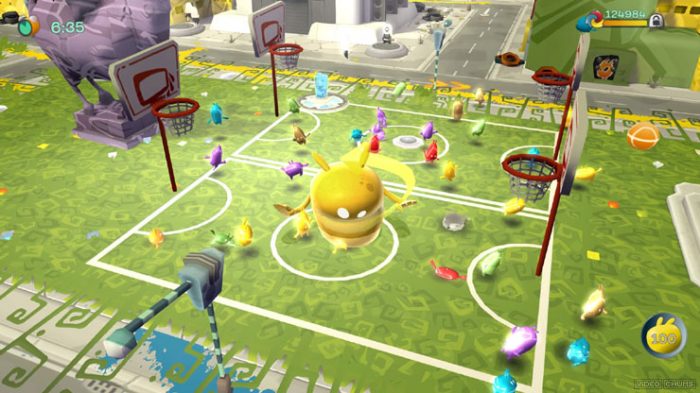 This unpredictability and general lack of control makes the many challenges you’re needed to complete in order to progress all the more tedious, particularly with those that require a block of buildings to be turned to two or more particular colours. Gradually filling in the environment surrounding you is satisfying and it’s easy to become obsessed with ensuring no tree, lamppost, or rock is left untainted, but being able to better manage jumps would’ve been nice.

There are ten levels in de Blob overall, and while that might sound minimal at first, each one comprises multiple stages that are at first gated then unlocked as you increasingly splat the town. It’s more than enough to literally paint the town red – or blue, orange, or any other colour at your disposal. Certain shades can only be achieved when combining colours, but thankfully each objective is always littered with the exact Paintbots you need nearby. It’s a little detail that if easily overlooked could’ve been disastrous. Thankfully, no problem here and any potential backtracking is scrapped. 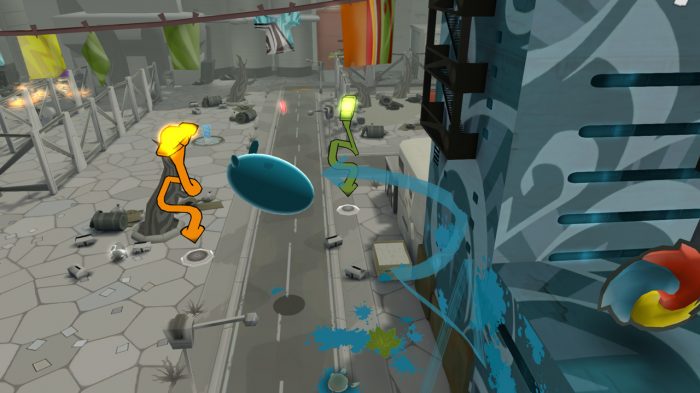 de Blob is all good, wholesome fun until it slowly dawns on you that what’s asked of you, this heroic task to introduce colour back into a drab world, is extremely repetitive. Regardless of the new obstacles, enemies, and methods of movement steadily introduced, the task at hand almost always boils down to: Find colour, become said colour, before finding the correct building to splat using it. I get that this is de Blob’s main thrust, but it feels incredibly shallow only just a few levels in as a result.

The game’s saving grace comes in the form of several thrills that can be gained when diving headfirst into de Blob’s Free Paint mode or bonus challenges. Both of which are opened up to you after completing a level for the first time. Free Paint removes the timer and enemies, encouraging creativity within any location of your choosing. But it’s the bonus challenges that will excite completionists. Technically a repeat play isn’t needed to acquire these, but it’s very unlikely when playing the story you’ll know to splat every billboard, kill this many enemies, or beat the level within an undisclosed time limit. These objectives are a neat touch, and often more exciting than the arbitrary tasks asked of you in order to progress. 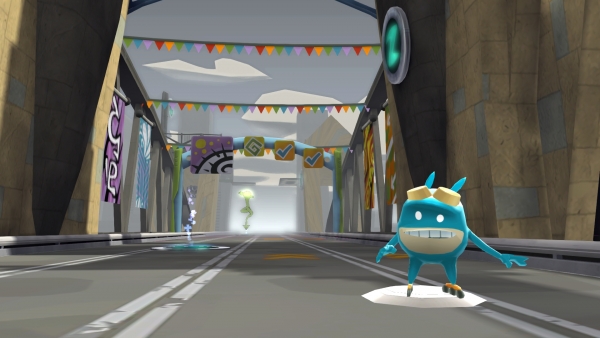 In the 10 years that have passed since de Blob first gained popularity a lot has changed in the puzzle-platforming genre. There are certain things about it that hold up, such as the humour, art direction, and charm, but there’s no hiding from the fact that time has not been kind to the lack of variety on offer here. de Blob does exactly what it says on the tin, but it’ll make you green with envy for the many other far superior 3D platformers – even on Switch alone.

Painting the town red is an easy feat to achieve in de Blob, but that can’t prevent the objectives from being incredibly tedious, basic, and simply not on par with the modern platformers today.