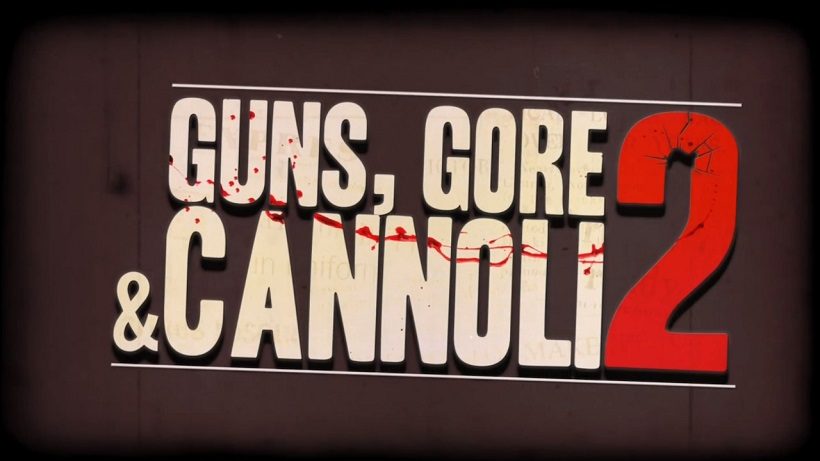 Just when you thought you were out…

Vinnie’s back, back again, and this time he has discovered that it is now possible to aim diagonally. Guns Gore and Cannoli 2 is a painfully by the numbers sequel. Did the world really need to know about the further exploits of Vinnie Cannoli? That’s not a rhetorical question, as the answer is no. However, despite not needing a sequel, the developers have learnt from the more apparent faults of the first game and have rectified them for this sequel.

The most noticeable upgrade found in the sequel is the vastly superior gunplay. You can now free aim using the right analogue stick, whilst a little finicky – especially with fixed weapons – it improves the game immensely making it much more responsive. Although, as a result, the game does seem to be more difficult, even on lower difficulty levels, with the bosses representing significant difficulty spikes. This is partly alleviated by the new ability to roll and crucially double jump (how Vinnie can do the latter though is a mystery). Visually the sequel is a subtle improvement and maintains the surprisingly distinctive art style found in the original. Whereas the first game spent an inordinate amount of time in the abandoned buildings of Thugtown (still the most unoriginal place name) the sequel does attempt to introduce some variety to the scenery.

The original game had very little in the way of story and this time there is an attempt at building upon the almost non-existent remains that came before. In short, the previous game saw Vinnie trying to escape Thugtown after a zombie outbreak. This time around mysterious forces are trying to get Vinnie, and in trying to discover why sees him return to Thugtown, only to discover that the answer to who is behind this can be found in Europe.

Zombies once again feature but are no longer the main enemy. In keeping with the games setting now taking place a couple of decades later during WW2, the unimaginative decision of replacing a worn-out enemy is to introduce, that’s right, Nazis… Whilst the game does manage to successfully integrate Nazis into its barebones plot the whole tone is questionable. The Nazis aren’t positioned as the “bad guys” and instead merely a tool for the mysterious Dark Don. The use of the D-Day landings as a narrative device to get to the Dark Don’s lair is questionable and to make matter worse is Vinnie’s continuous use of the phrase “I’m gonna make America great again”. The poor Italian-American clichés might have been reduced – but still appear too often – only to have been replaced by even more terrible ex-wife “jokes”; and these are constant.

Towards the end, the game introduces areas where increasing numbers of enemies are thrown at you, which would be fine, if uninspired, if it wasn’t for the fact that the frame rate drops noticeably which adds to the difficulty; an even greater issue on higher difficulties. This problem is lessened when docked but is still present. The ending tries to set itself up as a great twist reveal, but provided you’ve played the previous game, you should see it before you even leave Thugtown. Although if you did enjoy Vinnie’s previous outing you’ll at least enjoy the gameplay on offer.

Guns Gore and Cannoli 2 is a very serviceable 2D platforming shooter. Certainly better than its predecessor. Unfortunately, Vinnie Cannoli remains an awful character and everything about the plot is lazy and at times concerning.