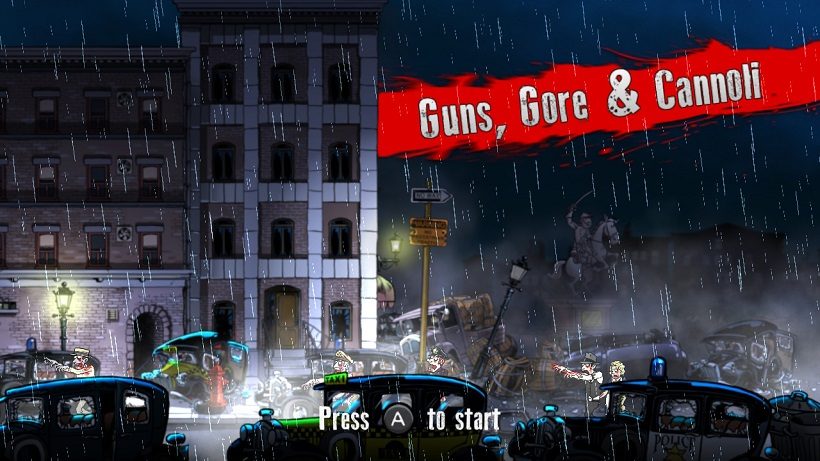 An offer you could refuse.

Thought the presence of zombies in video games had passed? Think again as, once again, they stumble out of irrelevance – this time affixed to the prohibition era of US history, along with a sizeable dose of tasteless cultural clichés.

Guns, Gore & Cannoli is a by the book side-scrolling platforming shooter. It starts off rather straightforward: see a zombie, shoot it until it stops moving. Unfortunately, you quickly discover that you can only aim left or right, but not on the diagonal. At first, this is a minor inconvenience as zombies slowly moving downwards or upwards is fine as you’ll have time to dispatch them once they reach your horizontal level, but as the enemy types expand and bring with them new movement actions, this shortcoming becomes much more problematic. You do, however, have the ability to crouch, which does help take down certain enemy types more effectively, and cover from others, as the game progresses. Then there is also the old reliable jump ability. 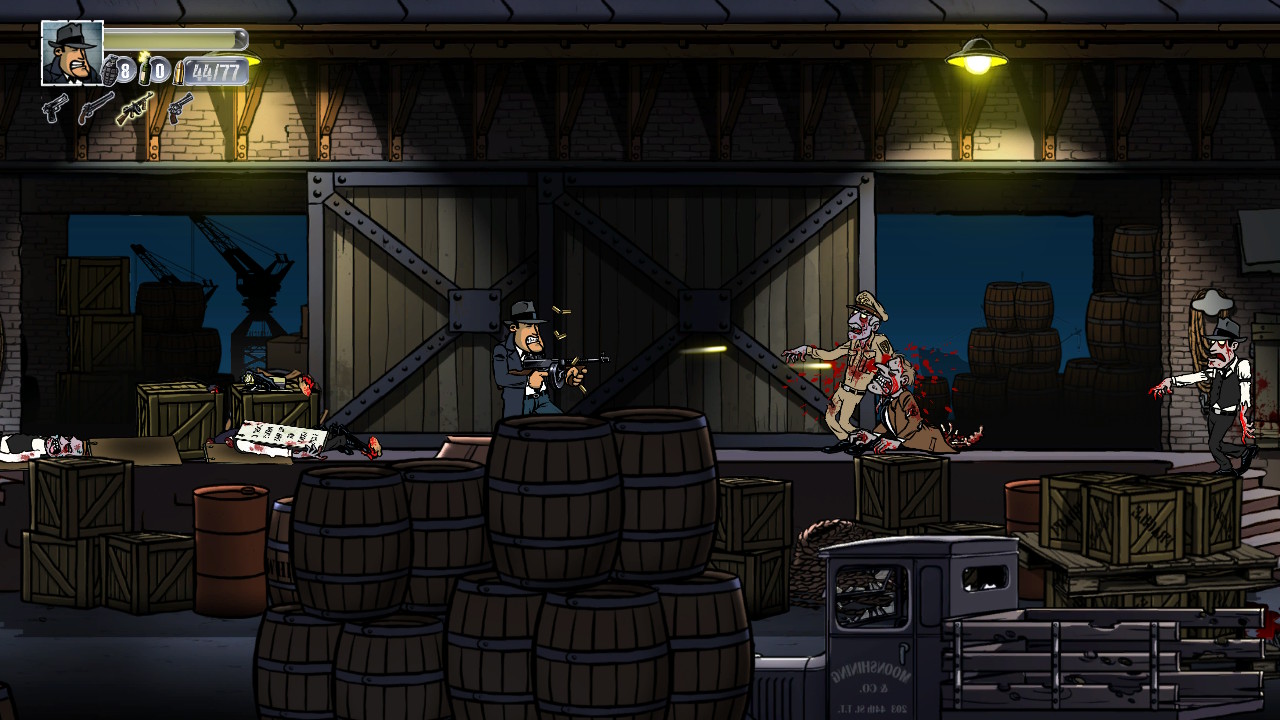 It was a surprise to discover the variety of different enemy types. Most of these are zombies and go beyond just looking different, as their movement and actions vary significantly. Beyond the 28 Days Later “rage” type zombies are ones that somehow are still able to just about use a firearm. It’s not just the undead that you must deal with. As this is a game that mostly centres around the activities of the mob, and because of reasons the game eventually explains, they managed to avoid turning into the undead. That still doesn’t save them from protagonist Vinnie Cannoli’s bullets though. 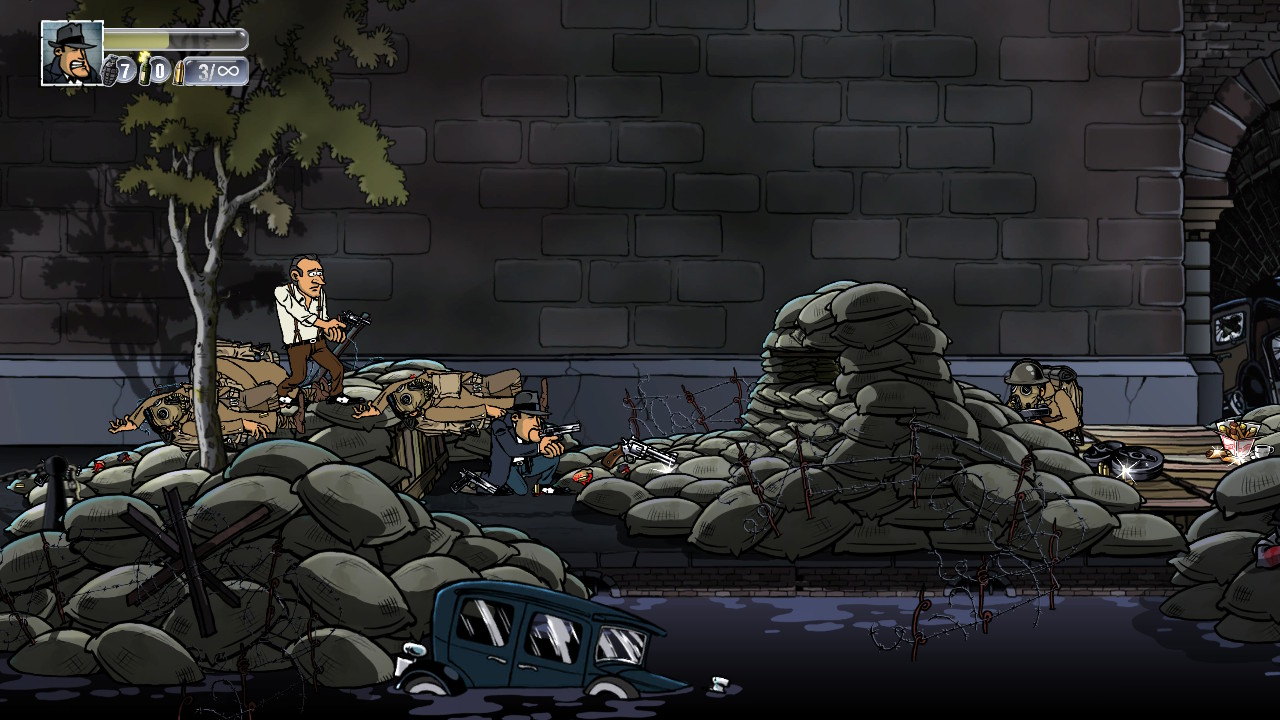 The undead and the mob might be the most prevalent nuance, but they aren’t the most threatening. Given the horror unleashed upon Thugtown (which wins the award for most unoriginal place name), the army has been called in, seemingly fresh from the European battlefields of The Great War. These soldiers bring with them gas grenades, flamethrowers, machine guns, and rocket launchers. They also possess some brain cells as well, so when combined with the impressive arsenal makes them a formidable challenge, especially if you find yourself ill-equipped. Combine them though with zombie rats that make an appearance around half way through and you have a real test to tackle. 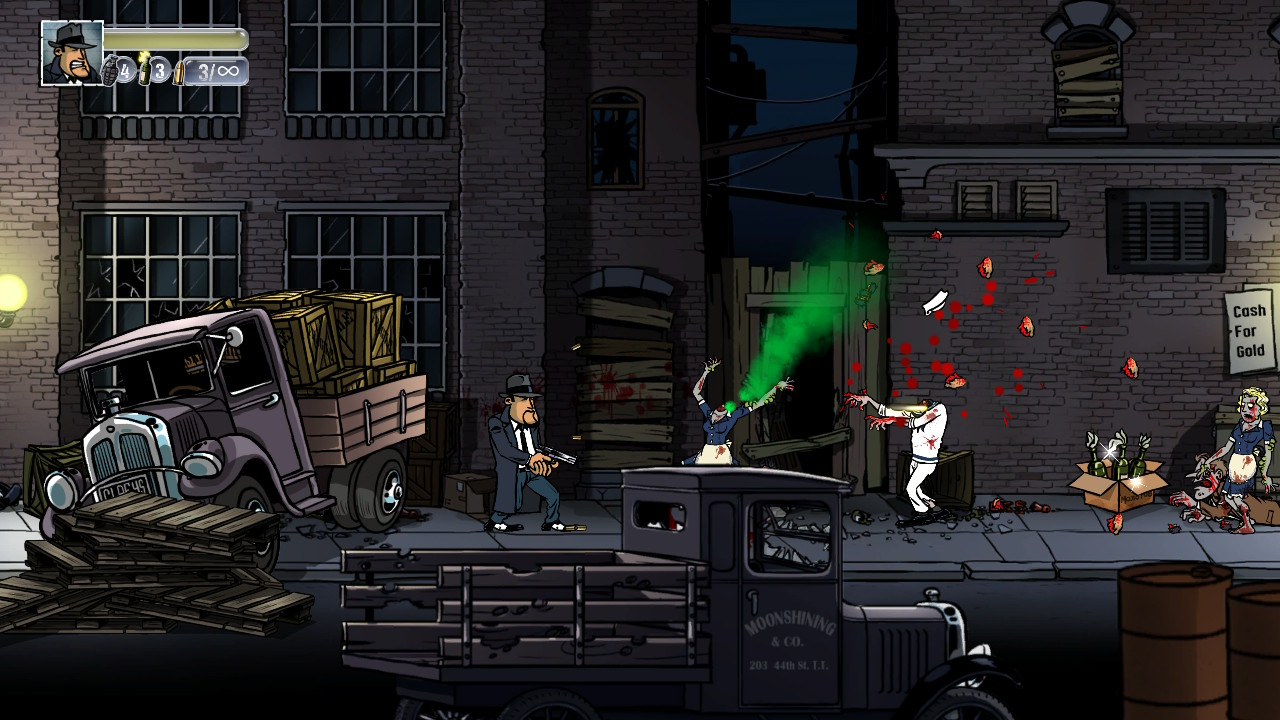 The different enemy types are what keep Guns, Gore & Cannoli from going stale during its relatively short playtime. The gameplay itself rarely evolves, beyond platforming becoming minutely more challenging and new gun types made available. The latter is helpful, though not strictly compulsory when tackling certain enemies. The difficulty level does spike up significantly at times notably during some of the boss encounters, elsewhere it turns the game into a sort of survival horror experience.

Aside from placing zombies into a 1920s setting and the Italian-American references that are often too on the nose, there is no single element of Guns, Gore & Cannoli that stands out. That is not to say that it is a bad game, there might not be anything to shout about, but for the genre, it is a competent entry that makes effective use of its drawn art style along with its time appropriate soundtrack. As clichéd as the game itself, this is for fans of the genre.

Guns, Gore & Cannoli shows that there is still more than can be done with the zombie theme. The game itself might not be anything remarkable, but it still manages to provide an enjoyable enough challenge.