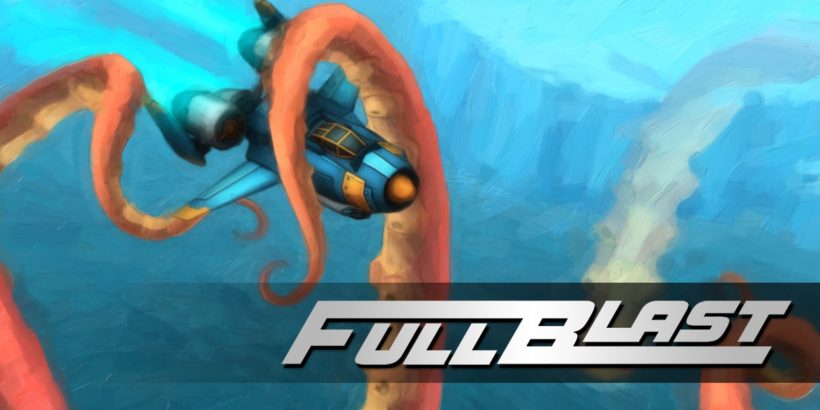 FullBlast is a fast paced on-rails shooter with a heavy metal soundtrack to boot. It follows the same gameplay style as Ikaruga or an even older classic, Space Invaders. Your aim is to destroy all the alien invaders that are fast approaching and survive long enough to reach the end of level bosses. You also have the option of taking a friend with you as local co-op play is supported.

There’s little in the way of story during your time playing, and to be honest it doesn’t really need one. You’re given a very brief introduction to each level which are quite similar in context. Once the Commander has given you the mission details, you set out in your airship to destroy enemy territory.

The game is presented in a top-down play style, with 3D environments below and enemy ships incoming from the top and sides of the screen, and occasionally in a circular motion. There are 12 levels on offer in FullBlast and they are surprisingly lengthy which serves as both as a blessing and a curse. On the one hand, it’s great to see they aren’t rushed and the later levels in particular require patience to survive the entire playthrough. However, enemy types do quickly become repetitive with only a few that are environment specific whilst the smaller minions you see frequently are the same across all 12 levels.

FullBlast is really enjoyable in shorter bursts, perhaps when you’re just winding down and getting ready for bed you can jump in and tackle another level. Playing local co-op with a friend is beneficial as well and does make the game somewhat an easier challenge as you’ll have double the amount of bullets hurtling towards the enemy – it’s really easy to pick up and get into with short loading times and an easy control system.

You control your airship with the left joystick and you can either use the A button or the R button to continuously fire your standard weapon. You’ve also got a bomb which you can trigger with the tap of the B or L buttons and this will wipe the screen of enemies. You only get one of these per session, unless you pick up an extra one through the item drops that downed enemies spawn.

Along the way you’ll encounter various power ups from defeating the incoming onslaught of enemy fire. These range from score multipliers, weapon upgrades, health restoration and extra bombs and more. They’re a worthy addition and break up the monotony of the same environments and enemy types.

This is one of the only downsides I found with the game; the environments do repeat which can make the levels feel repetitive. The same thing can be mentioned about the smaller enemy types, every few levels you’ll find yourself in a new area and although some of the larger sized enemies are exclusive. I can’t help but think the developers missed a trick by not having entire areas based around the different enemy types as again the gameplay can get a little stale shooting the same pattern of enemies.

However, with that said FullBlast is a great title for fans of heavy metal and classic shoot ’em’ ups! You’ll find varying levels of difficulty, co-op play, online leaderboards and some hectic boss fights which all add up to a great package.

Give yourself a couple of hours with this one and you can blast your way through all 12 levels on offer. A great soundtrack and classic gameplay make this a worthy addition to your Switch library.