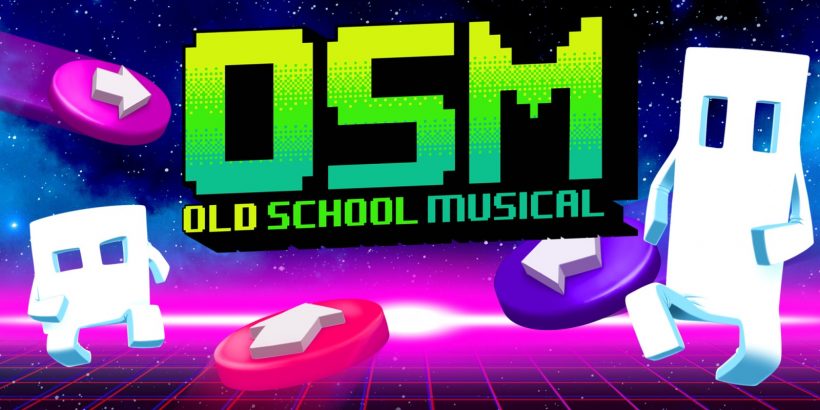 Give the controller back to your big brother.

Alongside the arrival of the Nintendo Switch Online NES library, console exclusive rhythm game Old School Musical gives a different take on our favourite retro games, and I’d hasten to say that I’ve had more fun with it than any of that NES library…

Old School Musical is a well crafted and satisfying rhythm game that cleverly parodies a bunch of beloved classic video games, both visually and musically. Utilising the four face and two shoulder buttons on the Switch, as well as the tactile, responsive feedback from the HD rumble in the joy-cons, the game captures familiar melodies and leitmotifs in its chiptune beats whilst simultaneously creating new foot-tapping bangers, conquered by increasingly fast paced thumb tapping and clicking. Contrary to R. Kelly’s belief, your mind will tell you yes as your body tells you no, howling out in pain from thumb cramp, desperate to hear more of the delectable beats from a range of different talented artists.

The story serves as an explanation for jumping in between these different game worlds, but to be honest it’s quite unnecessary, and some of the cut scenes in-between levels verge on obtrusive to the fluent gameplay cycle the devs should celebrate rather than segment. Two brothers raised in scorn by a demonic mother, it’s an arbitrary redemption tale that, whilst funny in parts, doesn’t really click with the gameplay loop. It was beyond redeeming for me to discover then that the game’s ‘Arcade’ and ‘Chicken Republic’ modes shine by ignoring narrative, allowing you to jump straight into the core experience that has been built. It doesn’t make sense, and it doesn’t have to.

The onscreen escapades of OSM’s characters translate well to the gameplay, and similar to Guitar Hero’s crowd reaction meter, it features a health bar that can deplete if the beats are beating you down, or increase and rejuvenate if you’re giving the beats a beat-down. The dynamic means that you can bring back the mojo after a stumble, and when mixing with the visuals, especially in boss battles, really feels like you are fighting and conquering the music.

Much like other rhythm games, OSM is inclusive with varying difficulties, allowing even those who aren’t fans of the genre to enjoy it’s parody references. It is without doubt most fun at the hardest difficulty however, as the other two verge on monotony with their simplicity, and mastering the fast paced riffs really makes you feel like a musical savant. In the post-story ‘Chicken Republic’ mode it really feels like the devs just let loose and experimented with their formula, throwing in a bunch of varied visual obstacles to catch you off-guard and extent enjoyment even further.

Old School Musical is both a quirky homage to classic games, and a satisfying rhythm game at the same time. With a brilliant chiptune soundtrack and even a thoughtful multiplayer mode, it’s another quality console exclusive that’s best experienced on Switch.

I could go without the pointless story, but Old School Musical is one of the best rhythm games on the platform at the moment. There’s a lot of content to get stuck into, and Switch is the best place to play with its nice HD rumble and console exclusivity. If you’re a fan of the genre, or even if you just fancy jamming out to some chiptune, I’d highly recommend this title.