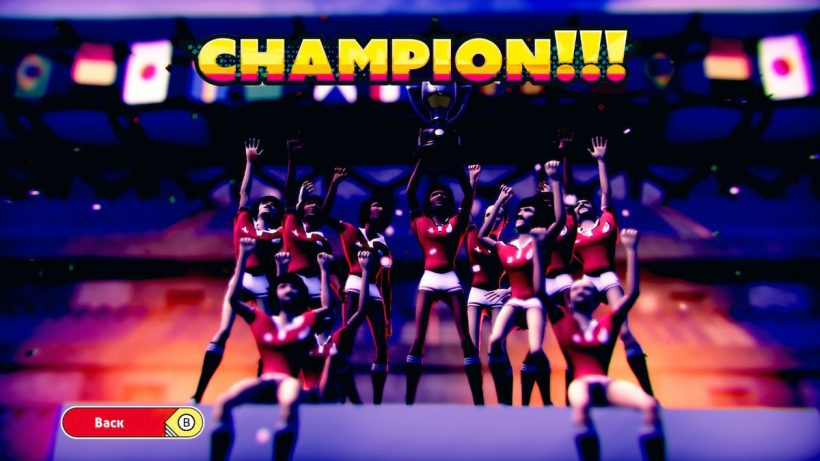 Not as legendary as Zelda.

It felt odd reviewing a football game this week with the looming juggernaut of FIFA 19 in such close proximity. Over the years, we’ve become accustomed to the fact that nobody is ever going to beat EA Sports’ game for authenticity, graphics and an overall “real” football experience. As such, the lesser-known football titles tend to go in the opposite direction in a bid to stand out.

Legendary Eleven is nothing like a realistic football experience, and spends no time at all ensuring that it’s as up to date as its heavyweight rival. Presented in an arcade, surrealistic style, the game is “legendary” in that it produces caricatures of stereotypical football legends, kitted out in short shorts and collared shirts to give the impression that you’re experiencing football from the 1970s. Entirely based on international football, even the countries are a hark back to the past, with Czechoslovakia, Yugoslavia and the USSR among the list of teams. Nations like Wales are included, so it isn’t just the World Cup stalwarts – and yes, I’m a Welshman, so I do know that even Wales managed to qualify for a World Cup once.

Onto the on-field action. This is very simplistic football, with a control scheme to match. A ground pass is done with the B button, while A pulls double duty as both the shoot and cross buttons, depending on which way a player is facing. Arguably, it’s the defending which is perhaps the highlight. Depending on your player’s fatigue levels, you can pull off a standing tackle quite easily, but the fun comes in the form of the sliding tackles, which have very few limits on the number of players you can wipe out in just one go – including your own teammates.

You never really know what is going to be a foul, either – you can flatten players with a ridiculous challenge from behind only for the referee to wave play on, and take the ball beautifully on other occasions only to be sent off. Sending-offs don’t really make much of a difference in this game as you never feel as if one team has more players than the other. And you can also foul the goalkeeper – a hilarious level of assault which FIFA have removed from the game for almost the last twenty years, much to its detriment.

There’s a momentum meter at play which builds as you successfully pass between teammates, and evaporates as soon as you give the ball away. Fill it and you can pull off an unstoppable, extravagant and acrobatic shot which will sail in every time without fail. You can toggle the ability to do this on and off pre-match, but you’re never looking for ultra-realism here.

You can play exhibition matches and cups separated by continent – so there’s no worldwide tournament, oddly. There’s also a mode which has you playing your way out of predicaments – winning after the scores are level at half-time, for instance. If you’ve figured out how to play the game, this won’t really be a challenge.

The game does suffer from the odd crash, which isn’t welcome if you’re three goals up in a tournament final. But it is a fun, budget football title, great for those who are too lethargic for yet another year of FIFA.

As an arcade alternative to FIFA, Legendary Eleven is fun enough. It has nowhere near the depth, though – and cutting out the crashes would help.