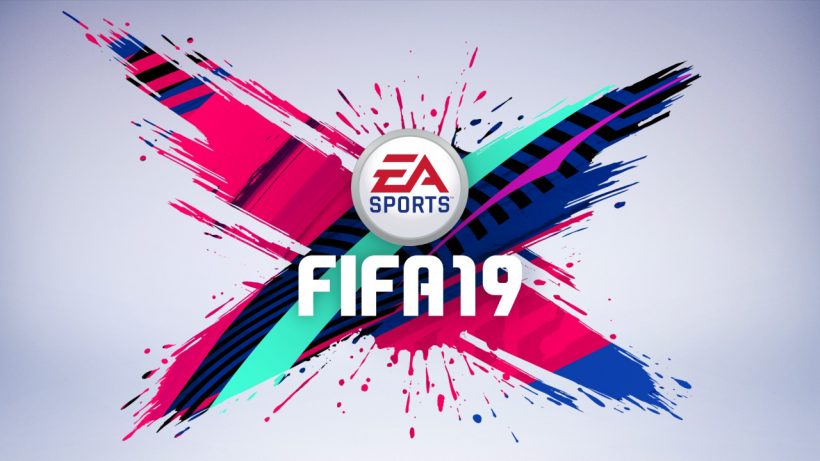 Let’s be honest. If you are reading this review, the main thing you want to know is, “is this years’ edition worth getting?” Or, quite possibly, “are there enough differences here to justify a purchase?”

After hearing Derek Rae tell Lee Dixon during Champions League commentary that “They’ve only gone and applied the finishing touch” for the umpteenth time, I couldn’t help but admire the differences and touches that have been applied to FIFA 19 on the Switch. It’s not quite on the same level as its brethren on the other systems, but FIFA 19 is easily the best handheld football title yet.

For starters, there’s that Champions League license – freshly snapped up from Pro Evolution Soccer – which brings all sorts of flashy shenanigans that those of us that love our football will appreciate, with that iconic music kicking everything off. There’s also the aforementioned new commentary duo for these European nights, which is a welcome release from those of us that have become agitated by the over-familiarity of Martin Tyler and Alan Smith. It feels altogether fresh and I loved hearing the enthusiasm and new lines of dialogue. This new addition can be played as both a stand alone experience as well as having full integration with the career mode, but I’ll get to that later. 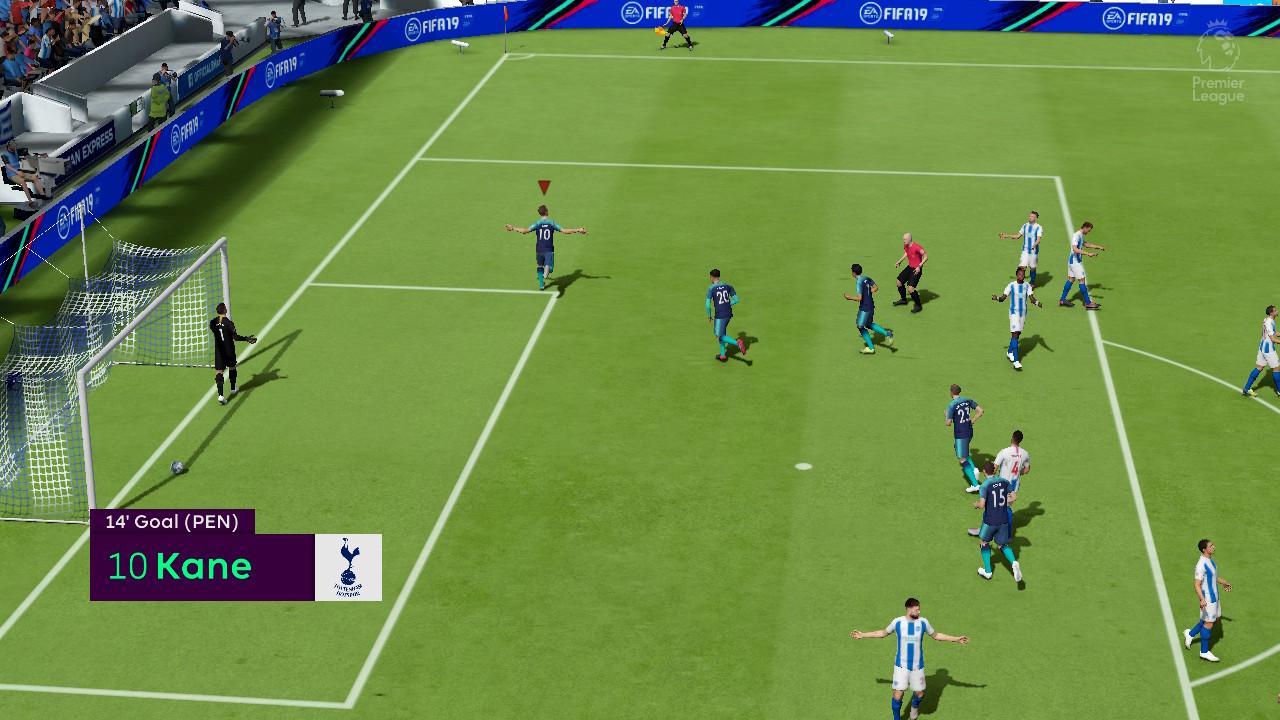 FIFA 19 also features a brand new, souped-up Kick Off mode, which will allow you to customise all sorts of rules to enhance your matches. Gone is the bog-standard match where you play off against a friend; they’ve gone for a proper overhaul here. You can play King of the Hill, where you keep going with teams and player sides locked, or even take on the brilliant Survival mode. When you score, you will lose a player, which continues until you don’t have the legal number of players. Other modes involve you setting whether only long range bangers count, or only headers/volleys or even just have a first to two. Or maybe, you just want to play a Champions League final…

The biggest (for me, at least) addition in this Switch edition is online friendlies. It’s absolutely ludicrous that you couldn’t play online with your friends on the Switch version last year, so thankfully they’ve added this in FIFA 19. You’ll (obviously) need an online subscription, but online friendlies will see you face off in a five match series with a friend, and the winner will be the player with the most points. You’ll earn a shiny trophy for your trouble (and bragging rights) before another seasons starts. It’s incredible competitive and thankfully they’ve seen sense. Playing with random folks seems to not be present, but I guess they need to have something to fix next year, right? 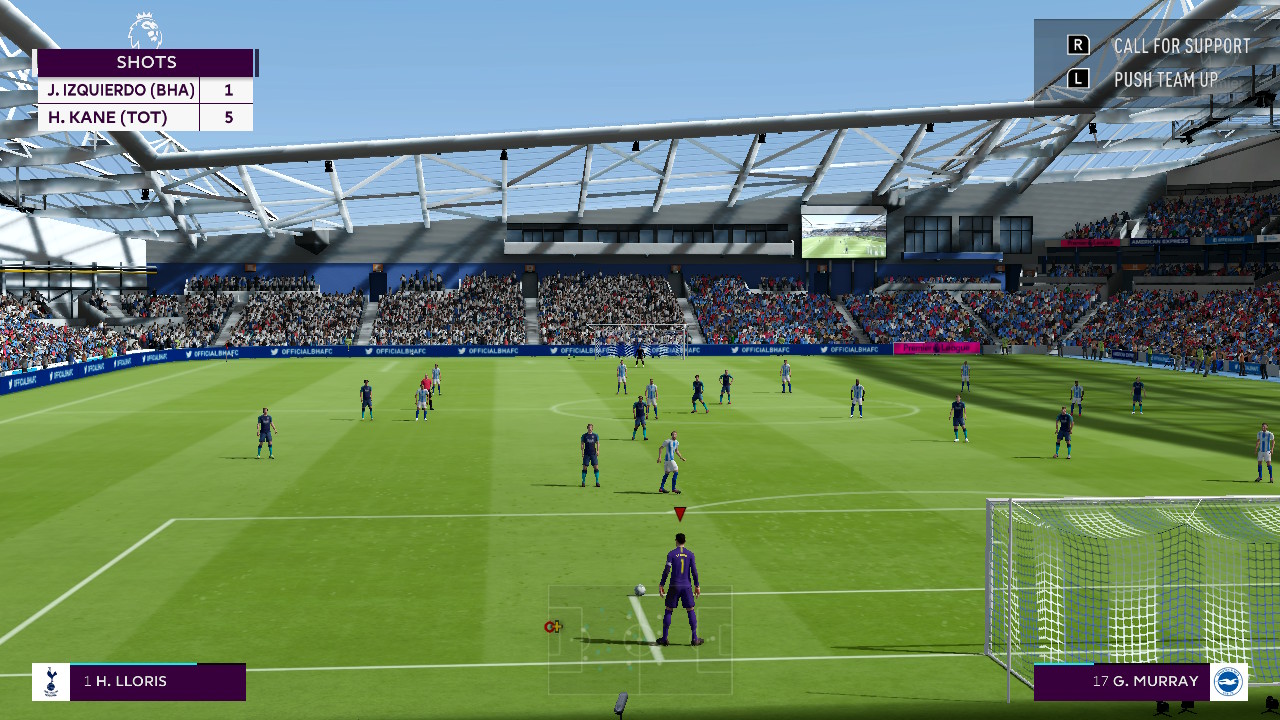 The gameplay has also seen some refinements, with shooting the obvious benefactor. As featured in some of the more recent console editions, you can now affect your efforts on goal, which requires a greater degree of realism to your match day experiences. Aside from the repetition in the commentary, I found that the vast majority of my matches did feel different, with a huge variety of goals scored; I was’t just doing the same thing every time. Tapping the shoot button initiates a window where you can tap again; these shots tend to have a higher degree of accuracy presenting a better chance to score. It also kicks in the HD Rumble on the Joy-Con too, which was a nice touch.

The crossing, passing and movement of the players was also brilliant, and I was able to execute a huge range of passing during matches certainly made the whole experience feel and play so much better. I noticed players making runs they didn’t before and although EA claim that the players behave like their real-life counterparts (I’ll leave you to be the judge of that) it certainly was much more fluid, and, dare I say it, realistic. 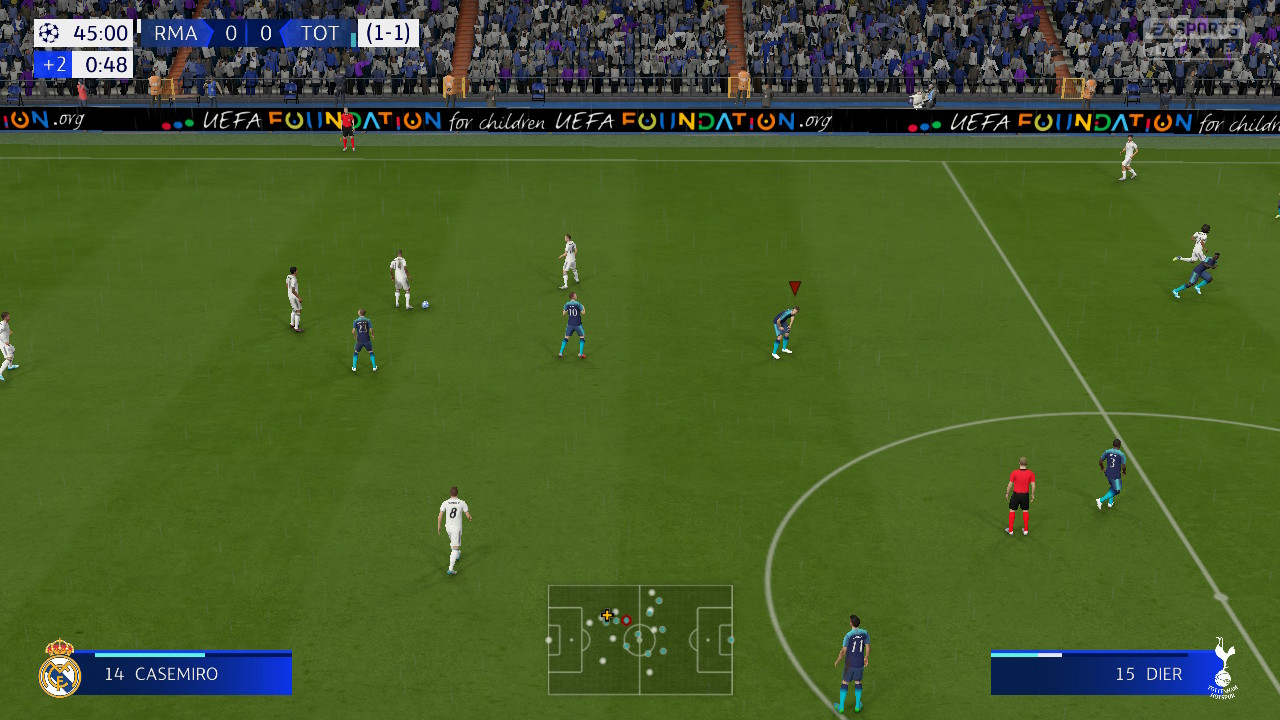 The presentation of the game is impeccable, and is described in my press stuff as featuring “authentic broadcast presentation” which basically means it’s just like on the telly. I mentioned this in my FIFA 18 review last year, but this really is starting to get close to that level of experience. Give it a couple of years and we will probably have various former players talking nonsense before the match…

The visuals have taken a step up; the crowd detail has been improved and the advertising hoardings rotate. Also interesting to note is that because PlayStation are an official Champions League sponsor, they feature heavily during those matches. Another welcome positive for the game is the use of video capture – which was not updated in FIFA 18 and enables you to capture the last 30 seconds of the match. It’s incredibly welcome for when you want to show off that 30 yard free-kick, or overhead kick; which I’ll also note seems to be easier to do this year. 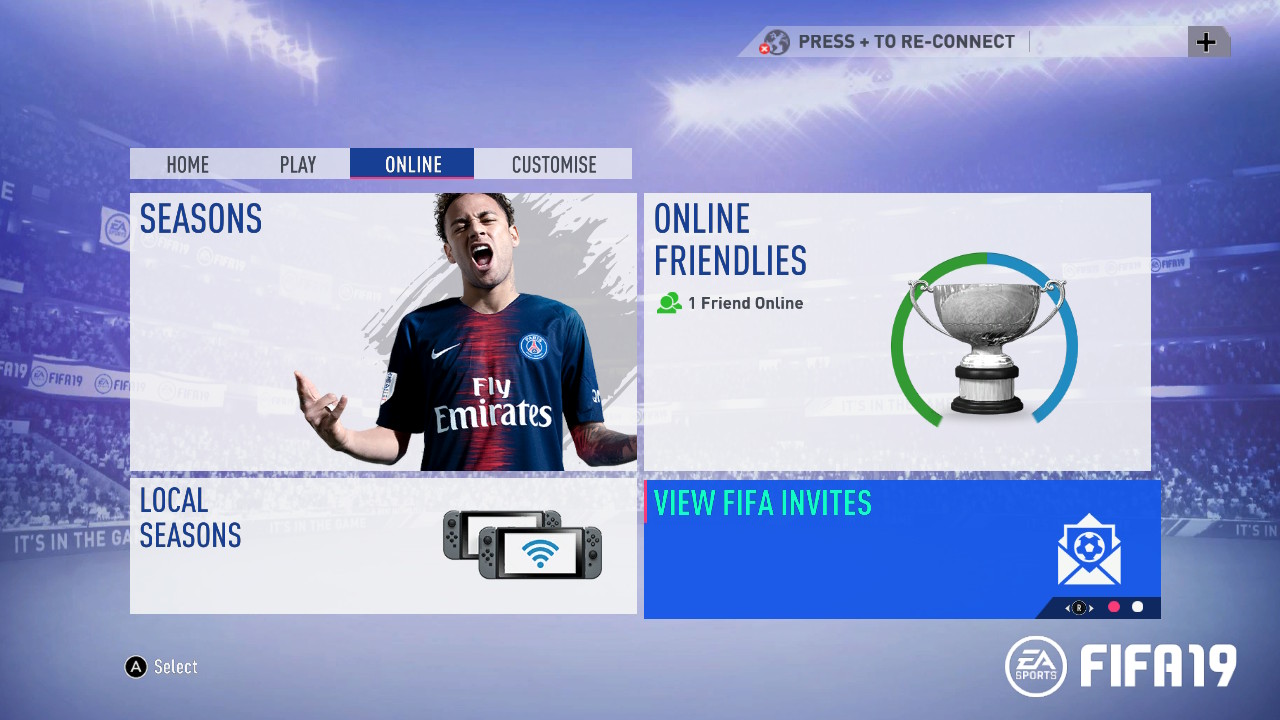 As for things that aren’t so great, there’s the career mode. It’s a little but shinier than last year, but it’s still not as enhanced or advanced as the other systems. It does integrate the Champions League (and the Europa League, as well as the Super Cup thanks to those UEFA licences) but it’s still a little lacking. The advancements in the game engine, welcome as they are, still run on that custom Switch engine. I’d say that means that it’s like FIFA 17, really, but with FIFA 19 enhancements. So it’s progress, but it’s not Frostbite. Which therefore, once again, means no Journey. I haven’t noticed any graphical glitches – not like last year with the unmapped faces – but that annoying screen jar that happens with free kicks is still present and occasionally the player collision is comical and what should yield fouls doesn’t, and what shouldn’t does. I also went to play as Brazil and the obvious lack of licence, Neymar aside, was very disappointing – especially from a series which has worked to accrue so many licences. And although it uses the official referee names from the Premier League, none of them look like the real thing – that’s another thing you can work on next year, folks.

I haven’t mentioned Ultimate Team yet, so I should probably jot a few things down. It’s also present here. If you’ve not played before it’s essentially a trading card based game where you “buy” packs – either with accrued in-game currency or real cash – and attempt to build the best team possible. Players are rated as either gold, silver or bronze and the more highly desirable players will obviously be rarer, and cost the most amount of dosh. I’ve mentioned the Champions League more times than I’d have liked to, really, but that’s even been integrated into this mode. EA are obviously very proud that they got the licence! It’s lacking a few features that other system editions have (he says, repeating himself again) and I can’t for the life of me see why. 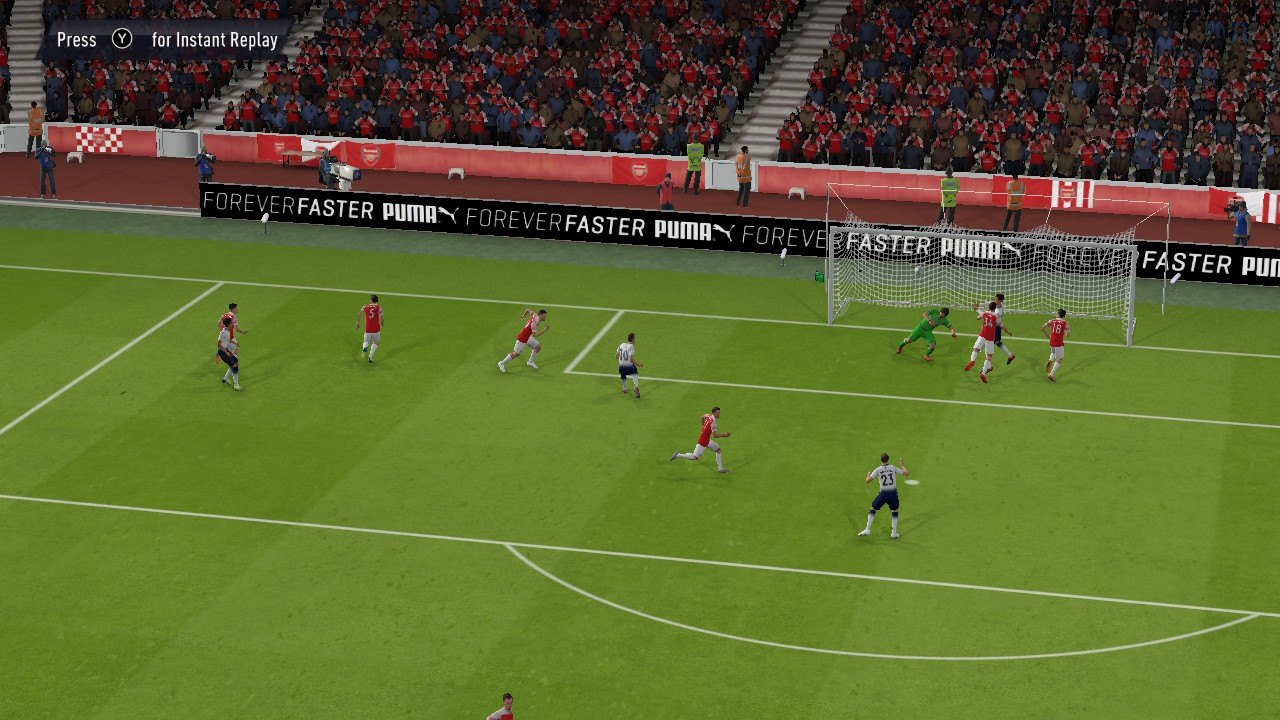 So, should you buy it? FIFA 18 was a decent entry onto the Nintendo Switch, if somewhat lacking in certain areas and it cannot be denied that FIFA 19 is a step up on that entry. It provides a more robust and solid football experience, with new features and just looks – and more importantly – feels the part. It’s more grounded and realistic than before, and essential for all football fans. Especially if you have football loving friends who you want to play online. If those things are not so important to you, then last year’s effort might do you fine, especially as it’s cheaper.

It’s still running on a custom engine which means that whilst it lacks some of the features of other FIFA 19 variants, improvements over last year’s edition on the Switch are very welcome and noticeable, offering a great experience. Arguably the BEST handheld football title yet. If you don’t own FIFA 18 and want a football game, then this is for you.