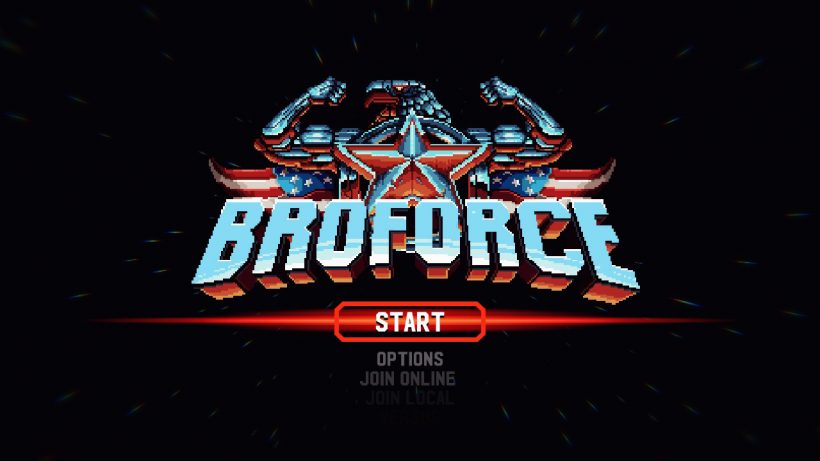 Broforce has an interesting development history. Born from a game jam, the game is a very successful example of how to make good use of the “early access” program. Along two years, it got help from the community to tweak its gameplay, add more content and become a more complete experience. Now, it unleashes massive chaos on Switch as a brainless fun experience – one that gets funnier with friends. 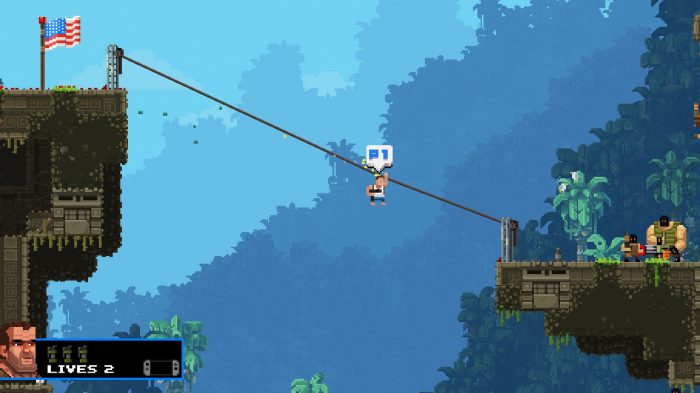 Your enemies won’t even notice you arriving! (in fact, they will)

The whole premise of Broforce is as goofy as a parody about the action heroes from the past can be. The titular organization has the valiant goal of spreading freedom across the planet. They do that by the use of chaos and excessive force on areas affected by the demonic presence of terrorism (yes, there is an actual devil at the end of each level). To make things even more insane, every single member of the organization is a reference to a character of a classic action move. So, you may see yourself fighting terrorism in the company of Rambro, Snake Broskin or Indiana Brones. Getting all the references is part of the fun.

The way all these bros play is quite straightforward (which is a good thing considering the co-op appeal of Broforce). The game could be described as a run n’ gun platformer. Within a side-scrolling perspective, your aim on each level usually is to cross the map from left to right, dealing with the enemies and environmental threats along the way. In order to do that, your bros will shoot (or use their main attack) with Y, jump with B, and use their special attack with A. Considering only this basic aspect, Broforce reminds a lot of games like Metal Slug – on some levels, it even has a robot that you can use. 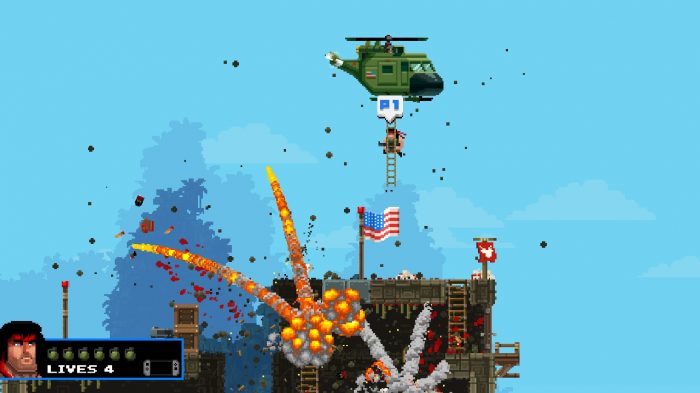 Why to care about your problems when you can just explode them all?

There are two things that makes Broforce different. The first, and most important one, is that almost everything on the map is destructible. The entire scenarios of the game are all formed by blocks (you can think about them as a 2D Minecraft, if you wish). They can be destroyed by you, enemies or environmental hazards. The game knows that and does a good job in spreading exploding barrels through the maps. Thanks to that, you can pretty much open your own way through the map.

The second aspect that makes Broforce unique is its varied roster of bros. On most maps, you’ll find cages with characters you need to rescue. By doing that, you’ll earn an extra life for that level, and will transform into a different character. Each character has a unique kit, with different attack patterns and specials. There are characters with mini-guns, bazookas, flamethrowers, swords, among others. Some may even feel terrible for certain maps, but thanks to Broforce fast-paced combat, it’s always fun to try them all. Many unique characters will join your team as a fellow bro.

Broforce represents this whole mayhem with a simple but pleasant pixel art style. It suffers from framerate issues when there’s too much happening on screen at the same time, but these moments are rare and brief. For the most part, it’s an enjoyable experience, one that gets even better when played with friends, on both local or online modes. As it allows for up to four players simultaneously, there’s no excuse not to reunite your bros and cry freedom.

With a goofy humor that throws many references at the player, Broforce is a very entertaining run n’ gun game, in which mayhem seems to be the main focus. Despite some minor tech drawbacks, it is a fun game to be played with friends.