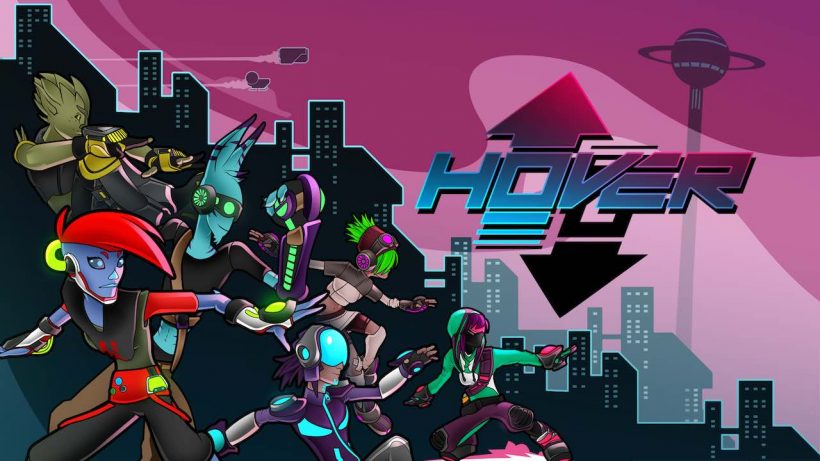 Hover is a free-running, parkour-style open world game set in and around the futuristic city of ECP17.

Within the city, all manner of leisure activities and anything deemed fun has been banished by The Great Admin. As a member of an elite rebellion, your end goal is to overthrow this power and essentially make the city a more free and inviting place. No one likes a party pooper.

In order to overthrow The Great Admin, you’re tasked with various missions set across the entire game world. It’s not a small city by any means, and trying to work your way around the environment will keep you running for hours on end if you’re not careful. You can essentially choose whatever you want to do once you’ve reached the main city – your missions are displayed in the top-right-hand corner of the screen and if you pause the game you can view the full list for the area you’re in.

The city is split into lots of smaller areas and most of them follow the same set of side quests, ranging from spraying graffiti on propaganda posters, disabling propaganda holograms, destroying spy drones and more. You can also see any quests that are within range to your character by using the scan ability – this really helps give a sense of direction.

With nine playable characters, you could be getting into the competitive spirit with ‘GameBall’ or racing around the city to test your speed and agility. It’s really your choice how you tackle Hover and it’s that sense of freedom that gives the game merit.

Only two of the characters are available to begin with – a generic male or female. You can customize them using colour sets and dimensions. With each unlocked new mission you will unlock different characters; you can assemble a group of multiple characters within your team, leading to further customisation options. Interestingly, the game’s online gives you the option to see other people within your game in real-time if they’re online.

You gain experience from doing missions and side quests, which will unlock new slots for your character to store perks and power-ups, such as additional jump power, speed, more traction and numerous other attributes. This adds a further challenge of balancing out your loadout as if you use multiple perks of the same calibre their effectiveness starts to decrease and all the while you also only have a certain amount you can use once you’ve fully maxed out a character. You’re able to change them if wish but you don’t get the wiped perks back.

What would have offered an improvement is for Hover to have included an option for a mini-map on the screen – you’ll need to pause the game and open the menu every time you want to see where you are. You navigate the menus by dragging a mouse-like pointer over the option you’d like to select, rather than having a more efficient input, so it can feel somewhat slow. Otherwise, Hover is a unique title that you can lose hours to just running around the city, tackling missions in whatever order your see fit.

Hover is a delight to play and a great example of the open world genre, set in a futuristic and oppressed hub. Featuring numerous missions and interesting online capabilities, it’s worth your time.