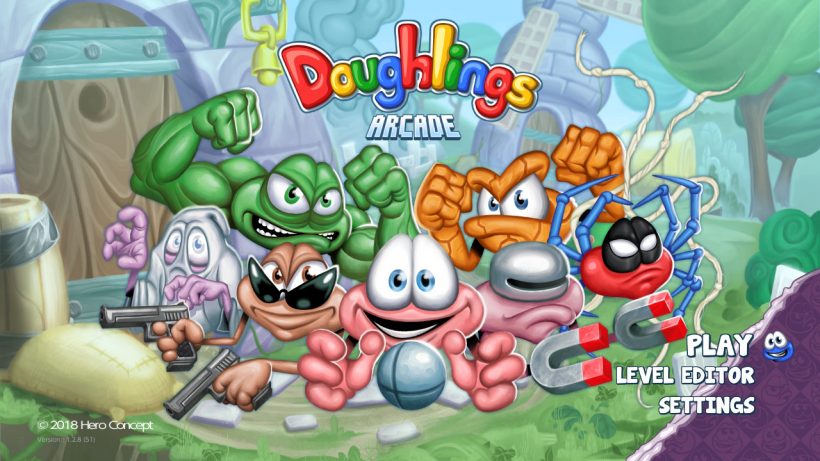 Doughlings: Arcade is a brick-breaking puzzle game starring Doctor Morpheus, a clever little ball of dough who just happens to be the only healthy inhabitant of his nation. You see, after a meteor crash lands on the planet, a poisonous gas leaks out, infecting the poor doughlings and sending them into a frenzy. As Doctor Morpheus, it’s up to you to heal them and bring peace back to a world of chaos.

Sounds promising, right? Well, sadly Doughlings: Arcade cannot back up its interesting premise with engaging gameplay, but rather delivers an experience that is frustrating and repetitive in equal measure. Packed with 75 levels across its campaign, it certainly doesn’t skimp on content, but when it becomes boring after the first few missions, what’s the point?

Gameplay is pretty basic for the most part. You control Doctor Morpheus by moving him horizontally across the bottom of the screen. You initially aim your ball (I guess it’s supposed to be medicine) either left or right and tap Y to chuck it in that direction. After that, you simply need to move into its path to keep the momentum going. The ‘bricks’ in the game are you fellow doughlings, and their colour represents how sick they are: yellow ones are positively sick to their stomachs, green are feeling a tad better, and blue would be the equivalent of a slight sniffle. So what this means is that if you hit a yellow doughling, it’ll turn green. Hit it again and it’ll turn blue. You get the drift.

Once the doughlings have been healed, they’ll float up to the sky and the screen will gradually clear as you heal more and more. To mix up the gameplay slightly, you’ll see a mini thumbs-up float down toward you every time you hit a blue doughling. Collecting these lights up some stage lights to the left and right of the screen. Collect enough of them and you’ll activate ‘show time’, which allows you to unleash an effective ability. For example, the ‘coloured ball’ ability heals all doughlings of the same colour, so long as they’re adjacent to one another. Or, you can use the ‘thunderclap’ ability, which heals every doughling on the screen – if you have a bunch of blue ones when you activate this ability, it’s genuinely quite satisfying to watch them all float up in one go.

This sounds great in theory, but the game is just so darn slow. It takes ages to clear the screen of doughlings, and to make matters even worse, it’s next to impossible to accurately hit the ball in the desired direction, which means you could potentially spend an unnecessary amount of time hitting it back and forth without actually hitting anything.

On top of the boring, repetitive gameplay, Doughlings: Arcade features the most incessantly annoying music for quite some time. Again, it’s repetitive, and it’s been stuck in my head for all the wrong reasons. Visually though, I don’t have too much to complain about: it’s functional, and it’s achieved what I assume it set out to do, in this regard. My only other main issue is that it just feels like a mobile game, which for the Switch, is not a good thing in my eyes.

Doughlings: Arcade is a functional brick-breaking game that means well, but its execution is poor and leads to repetitive gameplay.