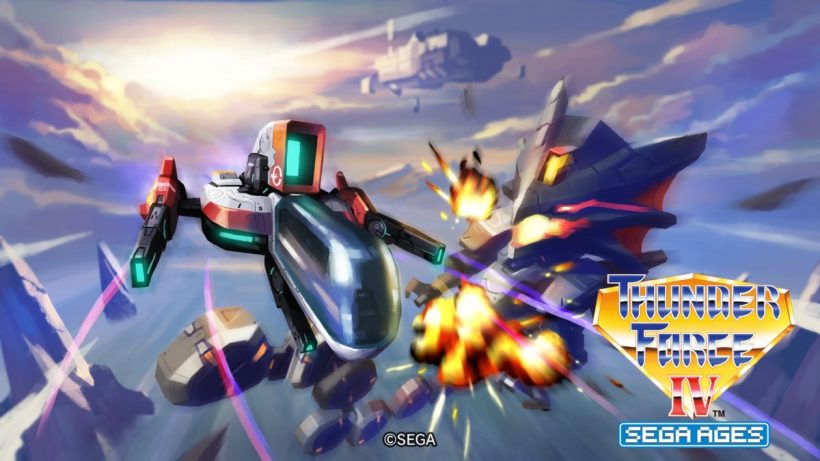 A shoot-em-up for the Ages

While Sonic the Hedgehog has now appeared on a bunch of Nintendo consoles, this one has only previously taken flight as a Wii Virtual Console game, so most Nintendo fans are likely to be picking this one up for the first time.

Why go with the fourth game first? Well, the reason is its following. Thunder Force IV is seen as the pinnacle of the series, and even arguably as good as these kinds of shooters come.

Quite why these games have a fire button when there’s no restriction on ammo is still confusing to this day. Blasting your enemies is not the only control input at play here, though – hitting Y cycles through attack types, with some focusing more on unleashing hell at the front of your ship, and others allowing for firing cover for your behind. Some enemies drop power-ups which allow you to fill the screen with an avalanche of lightning beams, but even when doing this an enemy ship can sail from out of view to smash your ship into smithereens before you have a chance to react.

For that reason, you’re best served hovering at the centre of the screen as much as you can – you have four lives before getting the dreaded game over, and you’ll want to conserve these for each of the end-of-level bosses. The other control option is the A button, which adjusts your ship’s speed – but the difference never really made a massive amount of alteration to the gameplay experience.

Speaking of the bosses, there’s a bit of a mishap with the height of the field of play – one boss hovered at the bottom of the screen, and sailing for ages towards the top there was little indication where the main action was supposed to be. You get to choose the order in which you tackle the game’s four environments, though each of the levels seems to carry on and on interminably. Knowing where the bosses are, and where the attacks are going to come from after getting some practice in, will of course shorten this down.

As with Sonic the Hedgehog, this Sega Ages release provides additions to the original game package. A Kid Mode ensures you retain weapons when getting shot out of the sky; games really are more forgiving nowadays than they were in the 1990s, that’s for sure. There are also leaderboards and the ability to watch other players in action, serving as a way to learn the ropes yourself. Thunder Force IV is a difficult game as it is, but the team at M2 are doing everything they can to try and accommodate novice players.

There’s more – you can adjust the Sega Ages border which surrounds the action, and a digital manual, though sadly this isn’t full of gloriously drawn explosions in a 1990s style; it’s more of a modern handbook.

We’ll see more of the Thunder Force series when the arcade version joins the Switch Sega Ages line-up down the road. For now, though, shooter fans will enjoy this.

Thunder Force IV will continue to delight shoot-em-up fans. The concern, though, is whether you’ll want to fork out for this rather than getting the more cost-effective Sega Retro system.