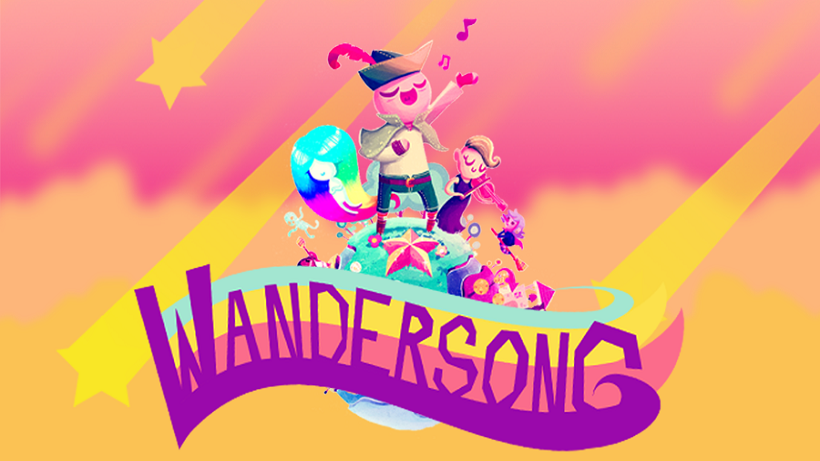 Wandersong might be one of the most joyous games on the Switch, and for a system that includes the likes of Super Mario Odyssey where you can control a T-Rex with Mario’s iconic red hat and mustache, makes this quite a statement to proclaim.

Greg Lobanov, the games creator, describes Wandersong as “a game where you use singing to save the world”. For an elevator pitch, that encapsulates the main objective of the game, but it is also so much more than that. Wandersong was such a surprise to experience, sure, it can be compared to other “art” games that are available, but it still feels like what we might expect from 2D platform adventure game.

Almost immediately you discover that the initially nameless bard is not the hero of this world, in fact, you can’t even successfully defeat an enemy with the hero’s sword. All is not lost though, as it is possible, although by no means guaranteed, that you could save the world by putting together the “Earth Song” which might stop the universe from coming apart; but no one is sure if this will work. Throughout your time with Wandersong your poor innocent – yet steadfastly optimistic – bard will be constantly reminded that they are not the hero, and to make matters worse there actually is a hero and her interpretation of saving the world is rather different to that of the bard.

How does a bard, who isn’t a hero, and can’t handle a sword, use song to save the world? The short answer is magic! Yes, the bard is granted magical powers that utilise his singing skills. In practice, the singing mechanic is an interesting one as it is surprisingly versatile. In the earlier sections of the game, this basically equates to a “Simon Says” style of play where you match the colour of the notes to what is displayed by another character/creature or from the environment. As you explore more of the world and its fantastical locations the depth of what you can do with the power of song expands; at times living up to its magical sensibilities. This gameplay, specifically the puzzles, aren’t perfect as quite a few tend to break down to educated guesses. But the logic behind them is mostly consistent, and it is always visually appealing.

Through its musical based mechanics, Wandersong succeeds in providing something that borders on a pacifist experience that still manages to play upon tropes from different video game genres. This isn’t necessarily a critique, although it does disregard the notion of the hero that is typically portrayed in other games. The bard’s use of song instead of combat reflects the peaceful optimism that permeates this adventure in the face of adversity. Whilst there are moments that provide a slight challenge, this is mostly a laid-back experience, you are never punished for failing and are just allowed to continue as if nothing happened. There is no in-universe justification for this, but as the Western world becomes more toxic, Wandersong’s bright optimism is an immensely welcomed treat that verges on feeling like it is providing you with a form of therapy. Ultimately, Wandersong is the game we need, but not one we deserve; it’s almost too pure for this world.

A kind-hearted jaunty adventure that sees you try to bring the best out of those who inhabit the world. It’s not all song and dance though as it is a reflective experience that might just see you learning a bit more about yourself.