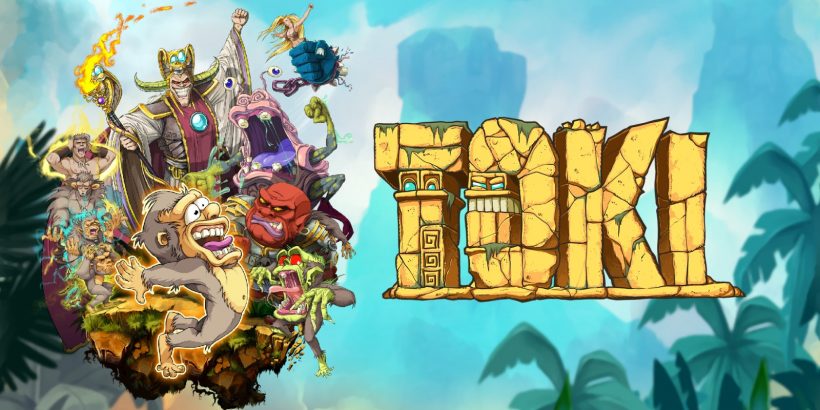 All about a champ turned chimp by an evil wizard that captured his girlfriend, Switch-exclusive TOKI is a cult classic arcade game from 1989 that’s been brought back thirty years later, with some love and a fresh coat of paint from developer Microids. It’s an authentic experience, but that isn’t necessarily a good thing.

A ‘run and gun’ action platformer, TOKI throws some pretty hefty trial-and-error level design at you, and not really in a good way. New enemies, whilst interesting in variety, will often spawn and kill you within seconds, giving you no chance to assess their pattern, and without teaching you how they move, or how to kill them. It constantly feels like the game is trying to trap you, luring you to run away from one enemy and then spawning something else in front of you straight away.  The levels are near impossible to clear without knowing them inside and out, and that kind of drains the fun from the experience.

Again, originally an arcade title, you can feel the ‘give me your coins’ mentality of the original game designers seeping through into the remake, and considering it’s a one-hit kill system with no save function, you’d better buck your ideas up if you want to see it through. Multiple difficultly settings affect the amount of hits the enemies take, but this is pretty superfluous considering most of your defeats will be at the hand of something off-screen that you had no time to react to unless you knew it was coming in the first place. Some arcade fans revel in this sort of challenge, so I suppose it’s love-it or hate-it in that regard.

Despite being held back by the shortcomings of its aged design, and some weird decisions regarding the garish overlays on-screen (do we really need to know the stage we’re on and top score at all times?), TOKI’s presentation is where its remake shines. A ton of frequently different enemies can be encountered across the nine different stages in the game, as well as some unique and quirky boss battles that really help in giving the little ape his own personality. It’s done true to the original game, which should please fans of the original game, and no two segments of the game feel the same.

Cool hand-drawn looking cartoon characters and enemies are the highlight of TOKI, and fans of the original game may find enjoyment in its trial-and-error design, but for me it just reminded me of all of my least favourite things from the 16-bit era. It definitely retains the feeling of a classic game, and it carries the spirit of the original, which some remakes can lose, but it’s an acquired taste that many have moved on from.

A fresh coat of paint and a new look for the crazy chimp don’t do enough to escape the aged level design and frustrating trial-and-error gameplay loop.