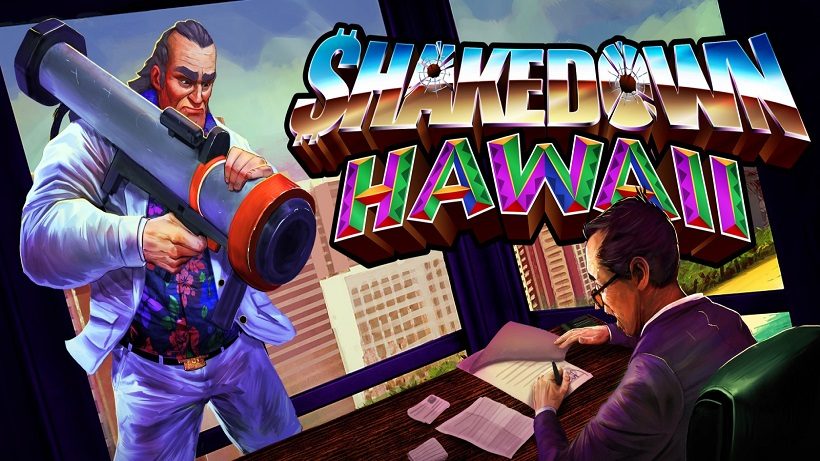 How do you follow up a game which began life as a Grand Theft Auto “demake” that became a love letter to 80s video games and pop culture? You upgrade to the next generation of high-tech pixel graphics and make everything bigger and better!

Whilst that is what makes Shakedown: Hawaii different from its spiritual predecessor Retro City Rampage, it is surprisingly different in its delivery and takes a very different approach to how it relates to the past.

Many reviewers found the sheer number of references to the past in Retro City Rampage a little bit too much, even though it was genuinely sincere. Developer Brian Provinciano has taken this on board, with Shakedown: Hawaii using the aesthetics of the past to critique the present. The result is a cynical portrayal of contemporary video games and more broadly the exploitation that comes from hyper-capitalism. The video game examples are mostly played for laughs, but the damaging effects of capitalism are baked into the core of Shakedown: Hawaii.

Almost everything in Shakedown: Hawaii revolves around money and getting more of it. More money means more power, which brings with it even more money. It’s a vicious cycle, but it’s one that benefits you the player, or rather the CEO of Feeble International; and to a lesser extent his deadbeat son Scooter (aka DJ Jockitch).

Unlike GTA games that are often tales of rags to riches, Shakedown: Hawaii starts off with a character who is already incredibly well off, though that fortune is at risk when the conglomerate has finally been exposed to the modern trends of the market. Therefore, the main story missions see the characters (who you swap between certain missions) go out and consolidate the position of Feeble International via any questionable means possible, be it compromising the competition or levelling the playing field to your advantage.

The other main way of securing Feeble’s position is to buy up everything. As you progress through the story missions more and more of the different properties on the Hawaiian island become available for you to purchase; others though still require a little extra persuasion. This can seem a little overwhelming, but the game makes it pretty much mandatory which main properties you need to purchase and upgrade, with some missions focusing solely on this. Although quite a few of the missions take this approach, accompanied by flipping between cut-scene, zooming to a different part of the map, then back to a cut-scene, then more map; it’s enough to give you whiplash.

There is quite a lot to do in Shakedown: Hawaii and the game tries to make the missions as varied as it can, despite still fundamentally conforming to the sequence of drive to X, shoot some people, collect/destroy Y. The inclusion of destructible scenery is a noticeable difference, as is the meaningful inclusion of a flamethrower which can cause devastation in the right place.

The 16-bit graphics are a real treat for the eyes, as are the wonderfully drawn cut-scenes. It doesn’t come off as simply a nostalgic throwback, instead, it demonstrates how effective this art style can be when paired with the right gameplay and overarching narrative. The soundtrack also manages to avoid rigidly sticking to the past, by instead providing a sound representative of the aesthetic the game is going for rather than imitating 16-bit era chiptune. This balance is what helps to give Shakedown: Hawaii its identity and makes it stand on its own merits.

Shakedown: Hawaii is one-part GTA and one-part capitalism simulator. Yet this combination provides an interesting power trip that also manages to act as a somewhat successful critique of the woes of contemporary business practices.