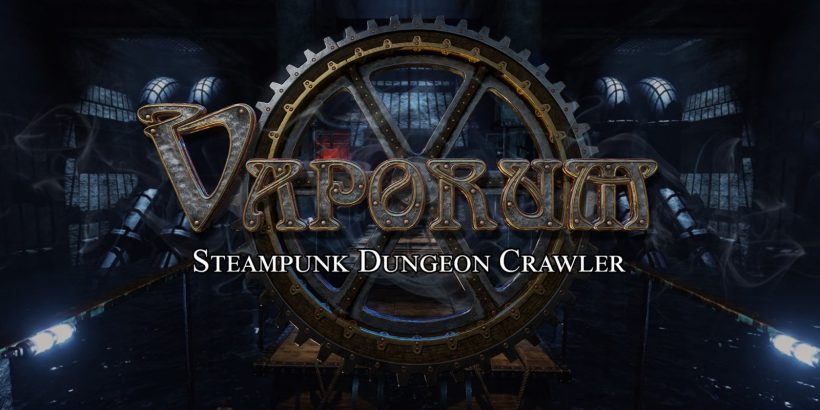 Awakening stranded in the middle of the ocean, headed for a strange (yet familiar) stone structure in the distance, Vaporum might appear to be very similar to the acclaimed BioShock at first glance.

While that might be the case in terms of some aesthetics and storytelling techniques, Vaporum’s stark identity comes from its unique dungeon crawler control scheme and combat mechanics. The two ideas form a new experience, and they mesh together rather well.

As is almost tradition at this point, Vaporum came to PC earlier on, in spring 2017, but despite lugging behind the Switch port is nothing to sneer at. In fact, in a show of commitment to creating the best version possible for the platform, developer Fatbot Games has already started adding QoL features in patches post-release, such as increasing the size of text on the HUD, and tweaking movement to make it feel more accurate.

References to Half Life and an atmospheric, creepy environment (again, very much in the same vein as BioShock) get Vaporum off to a good start, and the game gives you the choice of four different styles of rig (a Half Life style exo suit), setting you off on a different path of stat customisation depending on how you like to play. This only gets even more in-depth with specific skill trees, elemental abilities (providing anything from area of effect damage to increased attack speed) and even the ability to switch between two loadouts on the fly, helping you to be fully equipped in dealing with the menagerie of machine-laden spider-bots  and mutant cockroaches headed your way.

The enemies themselves are varied, both in terms of their stellar design and attack strategies, making the challenge of combat one that you’ll have to look into to master, rather than just picking the most powerful gun and sticking with it. Once you’ve got the hand of the albeit tricky-at-first controls, it’s really satisfying taking down an enemy with careful precision and planning, despite instincts to just shoot from afar and hope for the best. Puzzle segments also make use of the unique control scheme, adding an extra dynamic to exploration and helping to keep things fresh.

Told through notes left on scraps of paper and audio logs throughout the tower, Vaporum’s way of piecing the story together isn’t quite as interesting as perhaps Rapture or PREY’s Talos 1, but it keeps the crawl intriguing as you’re levelling up your character. With the unique gameplay and RPG elements taking centre stage, it still manages to keep the delve into the unknown a mystery worth solving.

Vaporum makes a decisive, and perhaps divisive, design choice in the way it plays. A unique modern take on turn based dungeon crawling, it stands out from the crowd in being more methodical and stat based, whilst still incorporating the narrative, environmental storytelling techniques and aesthetic popularised by Bioshock‘s Andrew Ryan himself. If it looks up your street then it’s definitely worth playing, but remember to save! Auto-saving is not present this time around, and if the dank, cold steel walls of Vaporum’s maze seem repetitive at times anyway, they certainly will when you’re replaying the same section for the fourth time.

Vaporum is a deep, unique take on a dungeon crawler that melds the grimy, steampunk aesthetic of BioShock with methodical, cerebral controls and combat. The plentiful options for customisation mixed with the great character designs and overall mood make it worth playing for genre fans.