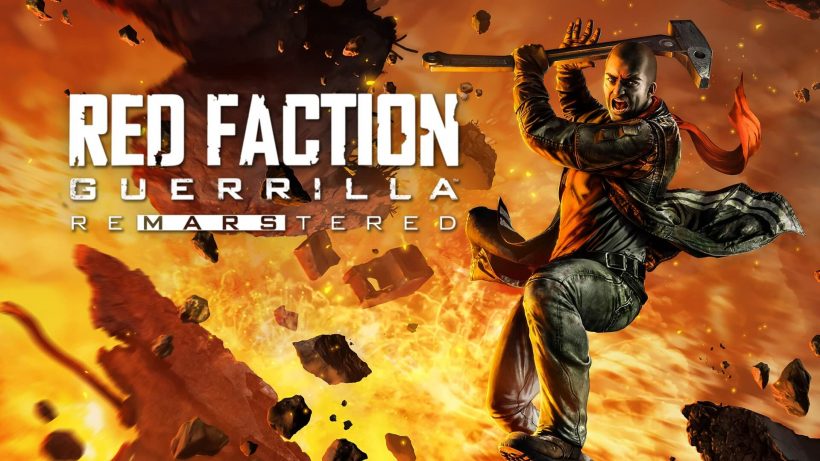 Destruction might be the name of the game for every Red Faction release, but it was really Guerrilla (originally released in 2009) that took this idea and ran away with it fully. While it’s taken a little bit of extra time, Volition’s much-beloved open-world cult classic has finally made its way to Nintendo Switch via its aptly named “Re-Mars-tered” edition, outright continuing THQ Nordic’s ambition to bring the entirety of its back catalogue to every platform possible. Luckily, it’s been worth the wait; this is a great addition to the solid library of third-person action games Switch has slowly been building.

Centring on rough-and-tough bald guy Alec Mason, his vacation to Mars is disastrously cut short when his brother is assassinated by the villainous forces right before his eyes. From here he takes it upon himself to join up with the Red Faction rebels, taking the fight to the militaristic EDF who have issued a state of martial law across the red planet’s surface. Red Faction: Guerrilla’s story was never one that would win it any awards, but it sets up Mason’s motivations just fine, largely acting as a simple set up to quickly put an axe in your hand and various structures to take down using it.

And here is where the real meat of Red Faction: Guerrilla lies. You see, this iteration of Mars has been terraformed to death over the past 30 or so years, making it your job to go out there and liberate all the respective encampments suffering from EDF control. This means that the bulk of your time will be spent travelling from marker to marker, assessing how best to approach each scenario while smashing the environment to smithereens and gaining precious scrap material in the process. Red Faction: Guerrilla doesn’t pretend to be big or clever, instead, recognising that there’s an instant satisfaction in causing a domino effect of destruction around you.

As already alluded to, your axe acts as your primary method of doing so. Should you ever run out of ammo for a specific weapon type or a vehicle to ram buildings with, you can always pull out your trusty axe and start wailing like the madman Alec Mason sometimes resembles to bring a full concrete structure down to its knees. Eventually you’ll unlock additional weapons that can be upgraded further to make yourself even more of an effective building killer. Shout out to the remote mines, which you gain very earlier on, but prove invaluable when taking down roaming tanks and bunkers.

Of course, all this would mean nothing if the destruction physics didn’t deliver. Thankfully, despite definitely undergoing a graphical downgrade in the move to Nintendo Switch, Guerrilla Re-Mars-tered sells demolition exceptionally well. When either played at 1080p on the big screen or comfortably in your hands during portable mode, I can’t tell you how many hours I lost just experimenting with the various weapon types and how they’d affect any structure I turned my sights to. Despite it being 10 years since the original games release, Volition’s commitment to believable collapsing and crumbling still shines through and is fully intact on Switch.

What doesn’t especially hold up this time around is this particular open-world rendition of Mars. There’s simply not a lot of variety going on during your travels, with barren wasteland always being followed by barren cavern and so on. This isn’t a case of Switch not being able to render a densely populated world Guerrilla sought to achieve, just that it’s a game born in an era where lush-looking environments wasn’t top priority. Thank heavens, therefore, that the gameplay and traversal remain solid – even if the simple act of firing a gun is slightly cumbersome when playing handheld.

There are some slight graphical improvements made over the PS3 and 360 iterations, but nowhere near as many as you’d see on those platforms’ respective successors. Lighting is perhaps the area where visuals have mostly been enhanced, with glares and shadows making it easy to never forget which planet you’re on or what direction the sun happens to be shining in. If you were going to replay this cult gem for the visuals, you would have grabbed it last year on another console. On Switch, however, I never lost sight of the sheer scope when playing on the go.

Overall, Red Faction: Guerrilla Re-Mars-tered – despite its tongue-in-cheek name – is an immensely satisfying time when playing on Nintendo Switch. Certain concessions have clearly been made to get it here, but nowhere near as much as, say, Assassin’s Creed III, which also just recently jumped ship to the platform. Alec Mason’s art of destruction has not lost its lustre in the decade since I originally experienced it, with it always being all too easy to get chaotically creative.

Red Faction: Guerrilla Re-Mars-tered makes it just as addictive to cause destruction as it originally did 10 years ago. While few downgrades have been made to get it on Switch, it’s a solid addition to the console’s library of third-persona action games.