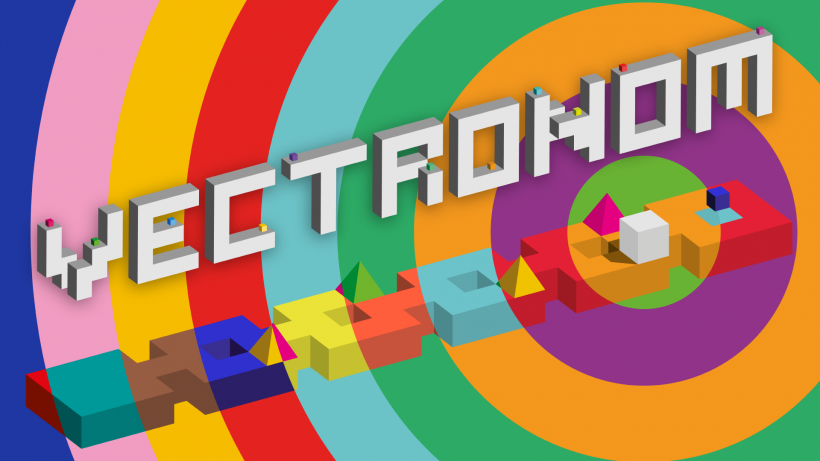 If you’ve been enjoying Cadence of Hyrule but find yourself wishing you could strip away all that beautiful Legend of Zelda coating, well, you should probably play the original Crypt of The Necrodancer. If you want to go several steps further though, and remove all traces of character, detail, and progression then you –  my ruthlessly pragmatic friend – are in luck. Vectronom is a rhythm-based puzzler which plays a lot like those aforementioned examples, requiring a similar set of skills to navigate short levels which morph and shift in time with the music.

Each stage requires the player to manoeuvre a cube into a goal area, avoiding pitfalls and dangerous obstructions along the way. Success depends on the ability to observe the rhythmic movement of the path ahead and plot a way towards the end zone. To begin with, this might be as simple as moving directly forward in time with a basic 4/4 time signature. The patterns and rhythms gradually become more complicated, but essentially every level asks the same thing of the player; look and listen to the pattern, remember it and move accordingly.

In fact, once you’ve committed the pattern to memory, it’s entirely possible to solve the puzzle completely blindfolded. This would be a fantastic party trick if, unlike me, you happen to know someone easily impressed by such things. Even if not, it’s a skill that does, in fact, come into play during the latter half of the game, where the layout of certain levels completely obscures your little cube from view. At this point, you’re left to rely solely on your sense of rhythm, so will quickly come unstuck if you can’t keep in time.

The patterns eventually become so complex and intricate that trial and error is required to power through some of the later levels. There’s no real punishment for repeated failure, though you will receive a little attaboy if you’re able to make it through on your first try. There’s also on-screen acknowledgement if you can grab every collectable within a given zone and remain perfectly in time whilst doing so. Such feats aren’t essential to progression but will provide some longevity for perfectionists.

For those of us not seeking perfection, however, the Vectronom experience is fairly short-lived, clocking in at under two hours for a full playthrough. Post-credits, a ‘Free Tempo’ mode is unlocked, acting as a difficulty slider of sorts; drop the tempo by up to 50% to give yourself more thinking time or crank it up by 200% if you want to hear the sound of your own brain frying.

The vibrant colours, polygons, and M.C. Escher inspired layouts on offer in Vectronom combine to make a striking visual style. Those bold design choices do sometimes conspire to derail the player, however, as the viewing angle can lead to incorrect inputs where it’s unclear what direction you should be heading in. That isometric point of view also calls to mind the NES cult classic Snake Rattle ‘n’ Roll, though mercifully Vectronom avoids the same 50s-inspired musical stylings, opting instead for something altogether more contemporary.

The soundtrack – all jagged synths and clattering industrial percussion – fits the hyper-modern, minimalist look of the game so perfectly that Vectronom offers an audio-visual experience along the lines of the excellent Thumper. The initial loading screen advises players to enjoy the game with headphones or loudspeakers and I would wholeheartedly agree with this statement. Eardrums be damned.

Vectronom is an adrenalin-pumping, mind-bending experience which provides a fun challenge for the duration of its relatively brief length. Thanks to that brevity and the slap-you-in-the-face presentation, Vectronom is a fantastic palate cleanser to enjoy between meatier offerings.