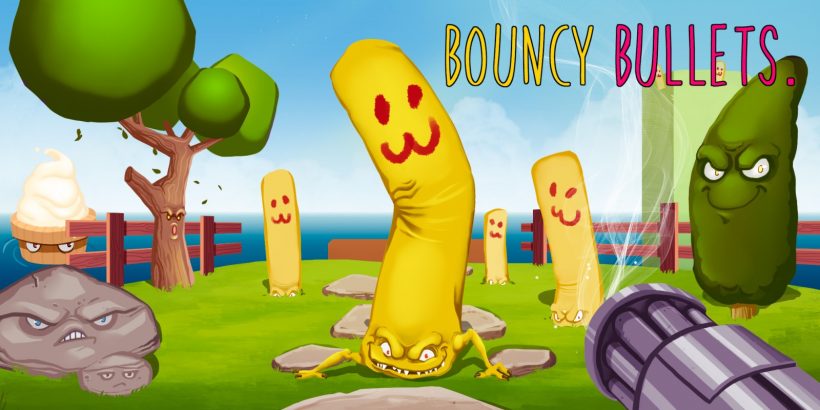 In a gaming world where players’ free time is getting shorter and shorter, indie developers have got to be clever in terms of offering concise experiences with a pick-up-and-play aspect that will keep players coming back. That’s something evident in Bouncy Bullets, from Ratalaika Games.

Using as little time as possible is the aim of the game here. Levels are a 3D obstacle course with dangers needing to be traversed in order to reach the finish, with most levels taking a linear format but others able to be completed a little bit faster with a bit of practice and some well-executed jumps. The Bouncy Bullets of the game’s title aren’t quite the main focal point of the gameplay – that would be the jumping and platforming sections – and in fact, the bullets are necessary only very minimally. The player has two different coloured bullets to choose from in red and yellow, and these are fired using the ZR and ZL buttons respectively. These are used to dispatch of enemies of a matching colour or to zap multicoloured blocks out of existence as a way to clear the way to the goal.

But the game’s not quite as easy as it sounds at first. Grey enemies must not be shot at any cost or you’ll immediately find yourself back at the beginning of a level, and that can be tricky, as sometimes you’re peppering shots of both colours towards walls in the hope of them disappearing, only to inadvertently fire right through the wall and hit the innocent bystander. Enemies fight back – often with pinpoint accuracy. The number of times I found myself coming unstuck when trying to strafe my way through oncoming fire was countless, and the fact that enemies can hit you from anywhere on the level so long as they can see you, there is always the sense of rushing at play so you don’t get hit from out of the blue.

For that reason, a lot of your deaths will feel like there was literally nothing you could have possibly done to avoid them, and that’s probably pretty close to the reality of the situation. There’s a random element in terms of elements like where the laser beams of death are when you spawn for the start of a level which can hamper your speed runs, and that feels quite unfair. You can leap off platforms for blind jumps to platforms down below and get smacked by an enemy shot with unfairly perfect timing – that’s an issue.

More unfair, though, is Bouncy Bullets’ awkward take on gravity. Jumps are floaty, and trying to turn in the air to prepare for your next movement inevitably results in and the first-person viewpoint means that you aren’t able to see exactly where you’re going to land all the time – there’s always an element of leaping towards the unknown. Looking down only slows you down, and that’s an issue when you’re jumping up to higher platforms and require a quick u-turn right upon landing seems to take an age, which is quite the irritation in a game which rewards fast completion times with very little. The consistent feeling is that a little more control over the movements for more precision gameplay would have been very welcome.

That’s what gives the game its challenge, of course – but the controls aren’t perfect enough. Still, Bouncy Bullets is good fun particularly when racing for three-star level times which can be set in less than a minute.

Bouncy Bullets is a fun game for short burst play, but one which could do with more accuracy in its controls, particularly when jumping. It does have good replay value, however.