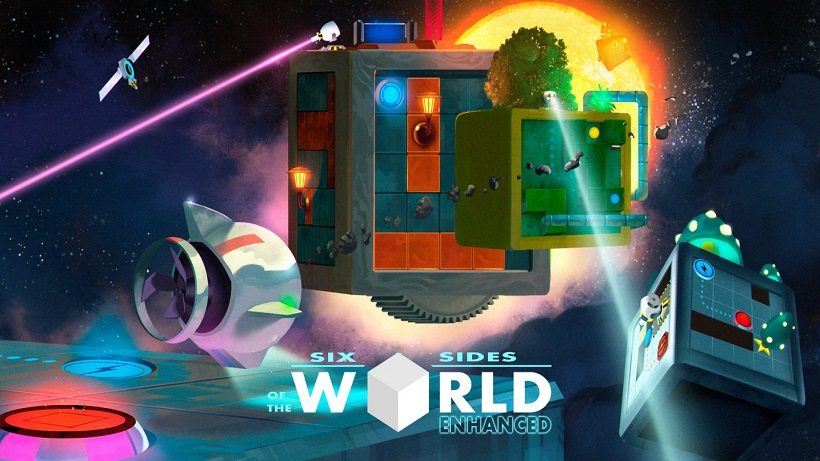 Six Sides of the World is an action / puzzle game from Delores Entertainment and Cybernetik Design. Originally released on PC in January 2016, the game is now also at home on the Switch eShop in the form of an enhanced edition. Six Sides of the World requires the player to manipulate the camera in order to navigate through lasers and other hazards in order to collect crystals, which then open a portal to the next stage.

As soon as you start the first level of the game, its inspirations and influences become immediately obvious. Those who have played Captain Toad: Treasure Tracker will feel right at home here with the gameplay. You take control of a robot known as Maigo, who finds himself in outer space with his memories corrupted. It’s up to you to guide him home by solving puzzles on the many worlds he lands on.

As you play, sadly, the game’s lack of variety becomes increasingly apparent. Once enemy lasers are introduced, for instance, they then seemingly make up the majority of the puzzles. There are switches on the ground which allow you to turn these lasers on and off, and while they can come in handy with regard to destroying hazards in your way, they can also be fatal should you accidentally leave one switched on and run into it. Death is a huge inconvenience to the player, as you will have to start the level from scratch.

The lack of checkpoints within levels adds to the frustration and disappointment. Levels can be rather lengthy, especially in the latter parts of the game, and one simple mistake can lead to an untimely death and having to solve a myriad of annoying laser puzzles from the beginning. It is easy to become disheartened by this, and have your experience of the game soured.

On a positive note, the controls are quite simple and intuitive; to guide Maigo to where he needs to go, simply use the directional inputs. An unfortunate drawback to this simplicity, however, is that the controls aren’t always accurate, with pressing in one direction often leading Maigo to move in the complete opposite one for no apparent reason. This significantly impacts your enjoyment of the game, with no consistent way of stopping this from happening being easy to find.

The size of the display and text, too, are further frustrations. Even when holding the Switch close to my face, in handheld mode, the details are far too small to be clearly seen. This also extends to the menus, rendering the game’s overall presentation leaving much to be desired. Visually, no matter what, Six Sides of the World just doesn’t look good; even on a TV, the game looks to be comprised of low-quality textures and character models, and these are incredibly unappealing and off-putting to play with.

Overall, Six Sides of the World is a mediocre game. The puzzles and visuals will more likely frustrate players than entertain. The difficulty can be rather cruel at times, and with everything else seeming poorly-designed, and the story dull and shallow, I’d recommend saving your money and putting it towards another game in the eShop.

Despite its low price point, and the introduction of additional content not found in its original PC release, Six Sides of the World fails to impress. Its repetition and harsh difficulty is more frustrating than enjoyable.