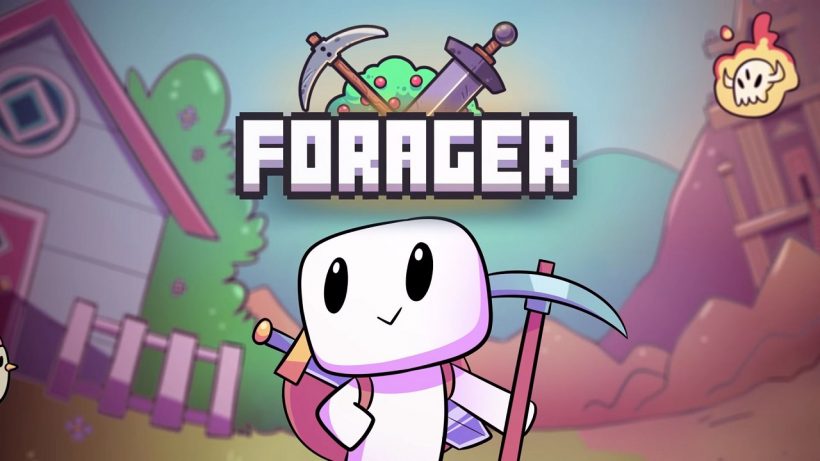 Forager begins with just one simple instruction: build a furnace. You look at the small island around you, dotted with trees, bushes and rocks, then at the pickaxe in your hand. Almost unconsciously, you begin to clear the area, gobbling berries occasionally to regenerate your stamina.

After only a short amount of time, your furnace is built, and you can finally process your ores into more useful products, such as items that can, in turn, be used to build other structures. A forge, for example, will transform gold bars into coins to purchase neighbouring lands. Beyond that simple yet addictive loop of mine, craft and expand, the only goals are those you place on yourself – a liberating experience, free of quests and campaigns.

The most obvious endpoint, of course, is to own the entire map while gaining enough XP to level up and unlock new skills. World domination, however, is bittersweet. On the upside, each island contains a unique surprise. As well as unlocking different biomes – each of which contains unique animals and plants – every parcel of land holds either a mini-puzzle, dungeon, or fetch-quest.

These optional activities offer a welcome change of pace and respite from all that hacking and slashing. What’s more, their completion is rewarded with new tools, skins (my favourite being a certain little knight with a big nail), valuable materials or orbs that can be used to upgrade your build or instantly level up.

However, with a great empire comes great responsibility. You see, the difference between Forager and similar games is the sheer speed at which nature reclaims its space. This means that automation quickly rises to the top of most players’ to-do lists, with points invested in skills that unlock helpful structures and perks. But industry isn’t the only way to go. Maybe you want to invest your points in economic upgrades such as banks, vaults and commerce. Or maybe magic is more your style, and you’d rather clear land by emanating lightning bolts rather than building mining rods. The wonderful thing is, the choice is yours.

This utter sense of freedom is what Forager does best. Though fast-paced, the cost of failure is relatively low; enemies are never more than a brief annoyance, and dying means re-entering the game a few minutes earlier, rather than perma-death. This makes for an almost zen-like experience that easily eats your time.

It’s not all sunshine and roses, though. The controls can be a little clunky at times, and especially later in the game, the interface becomes cluttered due to an ever-expanding quick toolbar. Additionally, the Crystal Cave is practically unplayable at the moment due to lag, but players should rest assured that updates are planned. These include quality of life improvements, as well as changes that will increase the game’s length and replayability.

Overall, Forager is a gem of a game where progression is the primary objective – and what that progression looks like is entirely up to you. Maybe that’s the point, in a way, to make our own choices and experience Forager uniquely from each other. It’s refreshing to play a game that expects nothing of the player except their participation, and I look forward to spending much more time in its world doing just that.

Forager is a charming resource management and exploration game with one goal: progression. With a compelling gameplay loop, charming environments and pleasant soundtrack, the game makes for an addictive yet satisfying experience. The only downside is that it’s not longer.