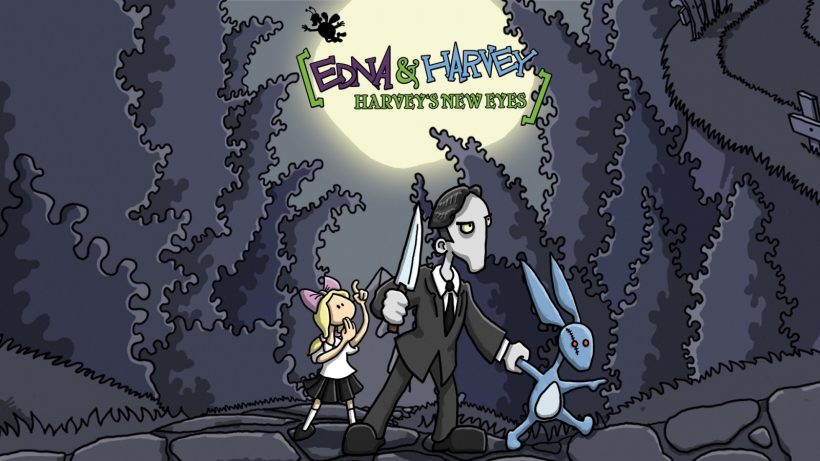 Surely, with such a vast eShop catalogue, there can’t be many games that can bring something that we haven’t already seen to the point-and-click genre. While Edna & Harvey: Harvey’s New Eyes may not do anything new, per se, it does do what it already offers better than most other titles do, and as a result it stands out from the pack.

This game was originally released in 2012 as the sequel to the first Edna & Harvey title, The Breakout. Translation issues made things a bit difficult for the series’ maiden title after it made its way to English audiences from Daedalic Entertainment’s home of Germany, but this Switch edition, which represents the first time the series has made an appearance on home consoles, has fortunately no such problem.

Harvey’s New Eyes is a cartoon point-and-click laced with comedic interactions which tells the short story of Lilli, a child at a convent and her best friend Edna, star of the first game. They are both blighted by the evil ways of Mother Superior Ignatz, the leader of the convent, whose irreconcilable rage is taken out on all of the kids and who seems to not even bat an eyelid when any misdemeanours befall on any of them. Gameplay advances the story by picking up items from one interaction and then using them somewhere else, and the majority of these solutions seemed pretty logical.

What wasn’t always logical, however, was the fleeting deviations from the gameplay formula mentioned above. Some maze—like minigames and some code-breaking sessions ramp the difficulty up a bit, while an RPG-like game set out on a chessboard makes for a really difficult final battle.

But no matter how difficult these minigame sessions, you can simply hit the + button to skip them, which renders the whole challenge of the game to be quite inconsequential. But the order of events, or at least where you had to go next, always seemed to feel natural, even if it wasn’t quite telegraphed by the game’s dialogue.

Harvey’s New Eyes isn’t the longest of experiences – you’re talking about three to six hours, depending on how good at point-and-clicks and puzzle-solving that a player might be, but that isn’t too short a runtime to avoid problems with the game crashing. Twice my playthrough was affected, though fortunately the game’s autosaving does help to counteract this, as both times I was able to recommence my playthrough a very short distance back, and the crash didn’t happen at the same moment again.

While an irritation, Harvey’s New Eyes is funny and charming enough to escape too much of a harsh penalty for such setbacks. Characters are delivered to extremes but don’t feel much like stereotypes, which is a complicated thing to achieve. With such a short runtime, the game does well to engross players as much as it does, and while you may have played a similar sort of point-and-click adventure on the Switch, the delivery of the humour in this one does make it stand out from the pack.

The hand-drawn art style looks particularly clean on a HD screen of 2019, and there’s no issues with this one feeling dated at all. Knowing there is an earlier game in the series yet to be seen on a Nintendo system, the logical next step is that we might see that on the Switch eShop at some point in the near future, but for now, this is easily one of the Switch’s most fun and enjoyable point-and-clicks.

It may be a touch expensive given its age, but Harvey’s New Eyes is one of the best-put-together point-and-clicks on Switch eShop. Pick it up.