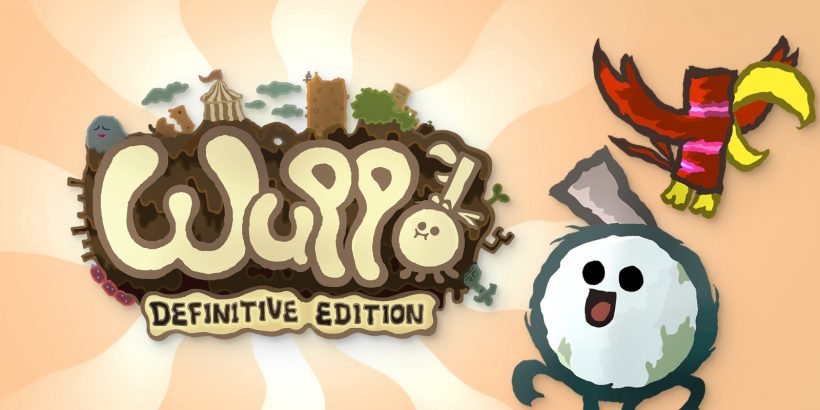 In the flurry to port everything to Switch, sometimes there isn’t enough care taken. Wuppo: Definitive Edition is a fantastic game, but one that suffers a little in the execution of its port.

The first thing to say about Wuppo: Definitive Edition is that it is cute. There is no getting around its aesthetic, writing and plot. You play as a little round blob, and you’ve been kicked out from your home for being too messy while eating ice cream. You were a jerk one too many times, so over the balcony you go. From here, you set out on a whirlwind adventure that gets progressively weirder, and the plotline takes quite a few turns as you try to find a home. However, to the game’s credit, these twists never feel contrived.

Gameplay in Wuppo: Definitive Edition is exploration as the story demands it, but with aspects of platforming and the occasional feeling of a Metroidvania. It isn’t purely items that help you. You also have to rely on your social skills frequently, and the game attempts to get through to you on a personal level despite its absurdity, which it largely succeeds at.

Boss fights will challenge you at times, and while it isn’t exactly Cuphead, they are the most gameplay focused sections. Outside of this, however, the exploration feels more like padding between story encounters. There are collectables to seek out too if you want to spend more time in the world. Actually playing through Wuppo: Definitive Edition is fun but the gameplay doesn’t stand out. The charm of the story and characters is what will hook.

It might not have the longest runtime in the world, but Wuppo is definitely a case of quality of quantity. The aesthetic of the game is lovely –  The visuals perfectly suit the off-beat plot and flow well with the music, and it has a hand-made quality that invokes the ‘squiggle-vision’ art style of Dr. Katz (although, it is considerably less jarring). The presentation might be where the game excels on Switch. The art style suits handheld mode just as well as docked, making it a great candidate for the Switch Lite. The cutesy aesthetic starts off nice but becomes progressively more impressive as the game’s scale ramps up, and running into an entire city full of Wuppos is a highlight.

The main issue with Wuppo: Definitive Edition is the controls. This shouldn’t be as a big of a factor in the game as it is, but they just feel poorly thought out. With the abundance of items, you have to toggle between menus that are too fiddly. It is definitely worthwhile to remap some buttons if they feel unnatural. The Switch also stutters a little in moving from area to area. These are some disappointing elements of the port. There is some console exclusive content like a Boss Rush mode, however, the fun of Wuppo: Definitive Edition isn’t in its gameplay, making this stuff a bit of an anti-climax.

Overall, the game is worth experiencing on Switch if you’ve not already played it. While the control scheme might not feel particularly natural, this is something you can push through, and the positives of Wuppo: Definitive Edition outweigh the annoyances of this port to make an experience which is still as cute and fun as the first time around.

Wuppo: Definitive Edition is a charming game that will delight players who don’t take it too seriously. The Switch version doesn’t translate as well as it could have, but this doesn’t take too much away from the really unique experience.