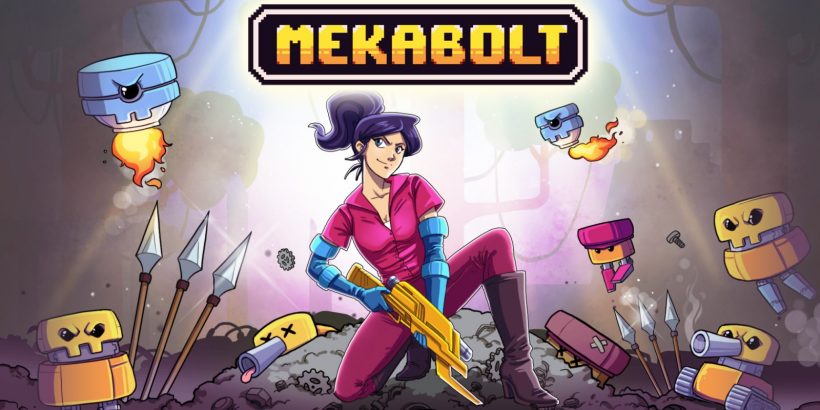 Not every game aims for the top, and not every game has to. Mekabolt, the puzzle-platformer from Somepx and Ratalaika Games, is one such title that may leave you mildly underwhelmed. While the game is functional and offers some enjoyment in short bursts, its lack of ambition prevents it from standing out in any meaningful way.

Mekabolt‘s short opening sequence provides some narrative context. The robots at the ‘Mekapark’ have gone rogue, and your goal is to collect all of the batteries in order to restore peace. Armed with nothing but your trusty mekabolt, a device that allows you to stun robots and interact with the environment, it is up to you to save the day.

As far as this narrative goes, it’s simple, unambitious, and fairly forgettable. The game simply doesn’t need it, and it certainly doesn’t develop any further. At least, though, it offers some justification for the adventure you’re about to undertake across the game’s 96 levels, which see you traversing four different environments. Many of the mechanics on offer are based on familiar tropes: moveable blocks, crumbling platforms, lasers, buttons, and so on. Little in terms of these mechanics is new or original, but thankfully, there’s enough variety to provide some interest over the game’s two-or-so hours of gameplay.

There’s slightly more enjoyment to be had through your interactions with Mekabolt’s varied robots. Unlike in many platformers, the enemies in Mekabolt cannot be defeated; rather, they can only be stunned, enabling you to approach and interact with them safely. These interactions are essential to your successful completion of the game, as you’ll need the robots’ help to warp through gaps, be launched upwards for higher jumps, and more.

Unfortunately, the level design in Mekabolt is really only adequate, and the game fails to do anything groundbreaking with the formula. Without going so far as to call it bland, the game does get a little repetitive, and there are certainly no moments that stand out as highly memorable from a gameplay perspective.

The puzzles are similarly fairly straightforward; there’s minimal thinking involved, and what challenge there is predominantly lies in the platforming elements. Any mistake will send you back to the start of the level, so you’ll need pixel-perfect precision to make it through. However, attaining pixel-perfect precision isn’t difficult in Mekabolt, and you may be left wanting a bit more of a challenge once you’re done with it.

Mekabolt is satisfactory in terms of its aesthetic, though again, it’s unlikely to win any prizes for the design. The vibrant pixel art is endearing, and the sprites are fairly expressive despite the minimal detail. The audio is similarly decent, and though there’s not a huge amount of variety in the soundtrack, the robots’ sound effects do create a layer of mechanical percussion which prevents things from getting too stale.

Overall, Mekabolt is a basic puzzle-platformer through and through. The game fails to do much to stand out from the crowd, and you’re not likely to be playing this title for hours on end if you pick it up. The short levels and lack of narrative do make this a reasonable game to play while you’ve got five minutes before the bus arrives, however.

Mekabolt is an adequate puzzle platformer to pass idle time, but it doesn’t do anything we haven’t seen before. If you’re looking for something fresh and innovative, there are definitely some better alternatives out there.