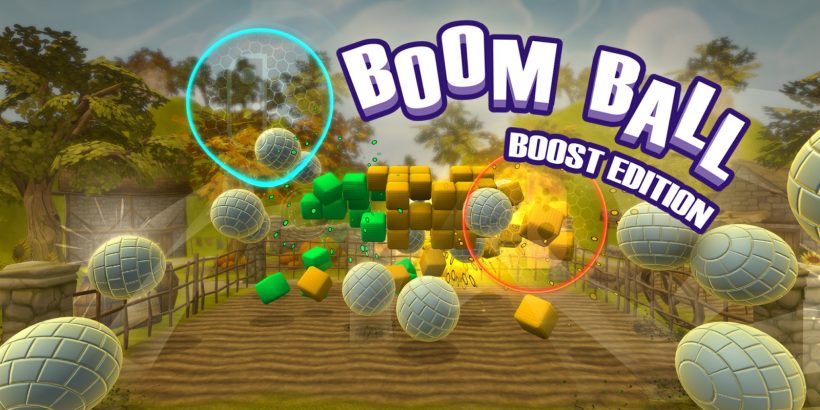 There aren’t many games on the Switch that I can think of that make full use of the console’s motion controls.  The touch-screen is another underutilised feature, rarely used for anything more than selecting options. That’s why it was a pleasant surprise to learn that Boom Ball: Boost Edition utilises both these things extensively.

Boom Ball: Boost Edition is a brick-smashing bonanza; imagine Brick Breaker, but in 3D and with the blocks coming together to resemble recognisable objects. The premise is simple; fire balls in the direction of coloured bricks. With over fifty levels to ‘boost’ through – the majority of them featuring some kind of scenic silliness such as exploding sheep or hunting sharks – the game is a pretty fun romp, and very addictive to boot.

We’re used to using buttons to slide paddles up and down, or left and right, on the screen in games like this. But, with 3D at play this time, you have options in Boom Ball. If you prefer playing docked on the big screen, you use the motion controls on the Joy-Con. Taking one Joy-Con in each hand, simply move your wrists in the direction of the ball. Joy-Con-like paddles will display on the screen, allowing you to keep track of what you’re doing, but it is inarguable that this is the more awkward and inefficient way of playing the game. As cool as it was to play this sort of game by waving your arms around, the frustration of the game not registering quite the way that was hoped was too much.

If you are a handheld player, then it’s the touch-screen which you need to use. Using the touch-screen is simple – tap the screen where you want your ball to ‘start’ then swipe left or right to set the ball in motion. Then, it’s a case of swiping back and forth until you either beat the level or run out of balls, which on this reviewer’s playthrough never proved to be an issue. One thing to watch out for – when playing in handheld mode, if the ball gravitated toward the far corners of the screen, it was often pretty difficult to physically reach it – which was a little annoying, and felt like a cheap way of reducing your ball stock. As was the natural choice, the majority of this playthrough was therefore done using the touch-screen.

You’ve all played a game like this – whether it be on the Switch in the form of a Glaive: Brick Breaker or way back even before Nintendo were putting out consoles.  You have to hit the balls towards the shapes in order to break them down until none remain. Boom Ball’s unique feature is the ‘Boom Meter’, which fills with each destroyed block. When full, the meter can be used to destroy any remaining blocks with lock-on explosive balls. There are a few power-ups you can make use of along the way, whether they be a giant ball or multiple balls, the latter of which makes the action distinctively more manic.

Each level has four medals, obtained by completing challenges like managing to avoid losing any balls, or completing the turbo version of that level. These medals unlock bonus levels, or some rare customisation in the form of new paddles. Chances are, though, that you’ll be too focused on the balls to worry about what the paddles look like.

We’ve all played a game like Boom Ball: Boost Edition, but we haven’t done it in 3D. You’ll have flashback to Wii Sports when your family is gathered around the TV waving Joy-Cons at the balls, but the best way to play it is sat-down with the touch-screen.