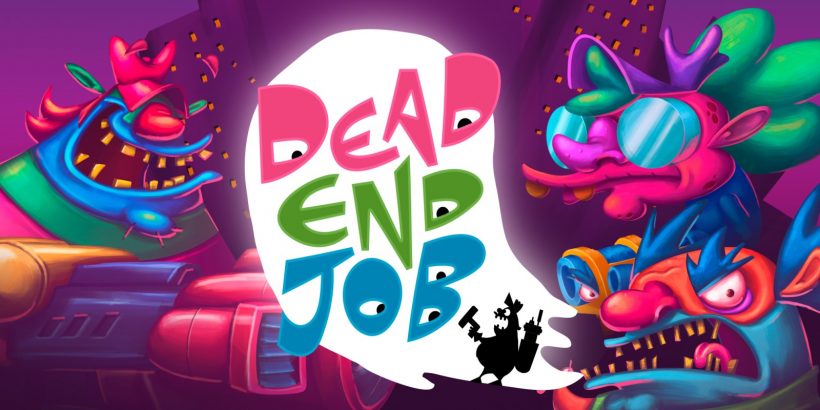 With all the floors of the hotel in Luigi’s Mansion 3 cleared out, and the Ghostbusters having hung up their boiler suits on Switch for the time being, there was a gap in the market for some ghost-hoovering.

Step up Dead End Job. This top-down, procedurally-generated, hoover ’em up has you clearing out rooms one-by-one in a bid to locate a set number of characters who have been trapped in ectoplasm – get your mind out of the gutter. Levels are a sprawling labyrinth and you never know what’s going to be in the next room. Ghosts must be shot in order to reduce their health bar, and then once they become dazed, they can be sucked up. You get three hearts, losing one when you get struck by the ghosts’ attacks. Once all three hearts are gone, you must return to base with the in-game calendar advancing a day.

See, this is a game about earning a certain amount of money in a set period of time. Reaching a set amount of money will unlock the next ghost-busting location, offering the chance for higher monetary rewards. Of course, losing all your hearts will minimise your rewards from each level, so just staying alive is paramount, with the time to raise funds running out. Boosts come in the form of side contracts, but these take place during the main game, so you won’t have to go out of your way to complete them. Every single ghost you hoover up adds to your payment for the job, with the more common ghosts producing chump change and the rarer ones offering the big bucks. The rare ghosts will have a more detailed and recognisable appearance – there’s a sandpit one, for instance, and another which is a pizza.

The cartoon style of Dead End Job is something reminiscent of a Toejam & Earl game – not just for having sandpit and pizza enemies. But the difficulty is more of a challenge here and not always for the right reasons. The primary problem is aiming your shots. Your character will automatically lock-on to a target, but more often than not it isn’t the target that you’re explicitly trying to hit. It can even lock on to destructible elements of the environment, which isn’t a big help at all when enemies are closing in and firing shots at you from all 360 degrees. That’s where most lives were lost during my playthrough. There is one benefit to shooting the inanimate objects, however, as they have a small chance of yielding extra cash or helpful items. Food can replenish your health and lightning conductors can be thrown (without much semblance of control, it must be said) damaging all ghosts in range of where it lands.

The best help, though, are the perks you can amass by filling the meter, which raises with each caught ghost. You’ll get a choice of three, which can ensure you keep your perks if you lose all your health, reduce the cool-down period of your gun, or even improve your accuracy. All the perks stack up, so play well and you’ll be an unbeatable hoovering machine.

Annoying controls aside, Dead End Job is a fun experience. I’m not usually a fan of the time period attached to games, which means some players won’t be able to see the end, but the satisfaction in successfully cleaning out floors is great. It’s just not seamless enough for a great score.

Dead End Job offers a good amount of fun, but the controls, and namely the difficulty in locking onto the required target, diminish the enjoyment somewhat. The humour and personality, however, make this a game that’s definitely worth checking out.