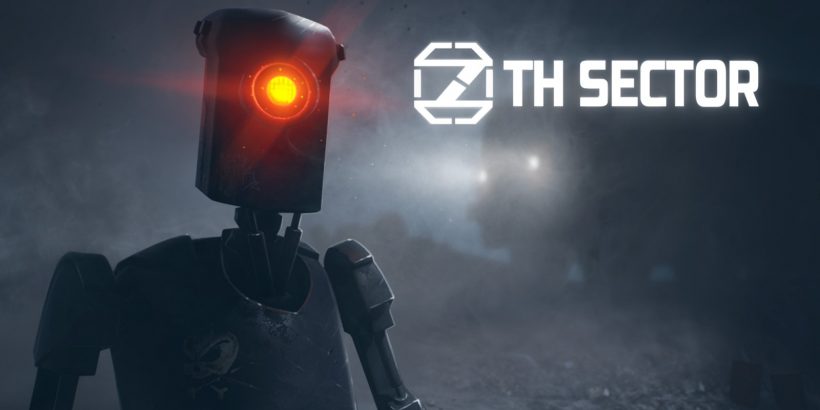 At its most basic level, 7th Sector is a well-paced puzzler that challenges players with a wide variety of logic problems. If that’s all there was to this title, the stunning art, haunting soundscapes, and satisfying puzzles would certainly warrant a playthrough. But 7th Sector has more to offer – a disturbing dystopian narrative that quietly comes to light through subtle storytelling.

You begin the game as a shadowy figure seemingly trapped inside an antiquated television set. Through sheer willpower, you transform yourself into a spark of light and escape into the network powering a world. Although you aren’t explicitly told that your life is in danger, the ominous surroundings urge you to escape quickly and quietly by solving puzzles that control barriers impeding your progress.

Mostly, the game controls well and apart from a little lag during later sections, performance was excellent. But periodically, your spark possesses and controls other devices such as a flying drone, an armoured robot and even a child’s toy. Although this adds interest and other forms of gameplay (such as stealth sections and combat), controlling some of these devices felt frustratingly difficult and I wonder whether their addition was worth the cost of my immersion.

Although the puzzles themselves are similar in the way they challenge the player to employ logical thinking, they differ in how they require that thinking to be applied. One may ask you to recall a little basic algebra, another to alter a computer program, and a third to seek out environmental clues. But, beware Switch Lite lovers – on this smaller console, some of the puzzles were made almost impossible due to the minuscule size of onscreen text.

Discussions regarding accessibility in gaming surface whenever a particularly challenging title is released. Last year, for example, Sekiro’s brutal boss fights sparked a passionate debate about difficulty versus accessibility. And while the solutions to many of this title’s puzzles are obvious once solved, the path to that point can feel almost insurmountable at times.

That said, the argument could be made that when the pleasure of a game is intended to extend beyond the mechanics themselves (in this case, the puzzles) and into the narrative underpinning those mechanics, optional hints to aid those who may be struggling at a particular point would allow all players to uncover the dark secrets at heart of 7th Sector, regardless of their neurocognitive abilities.

Luckily for myself, the answer to one particularly perplexing puzzle was found online. But this may not always be the case as any choices made can influence the player’s experience and ultimate outcome. This branching narrative, along with the option to gather collectables safeguarded by optional puzzles, encourages multiple playthroughs as players seek to uncover all possible truths.

But what makes 7th Sector stand out is how the game delivers its narrative. As writers, we’re often told to ‘show’ rather than ‘tell’. And 7th sector excels in the art of subtle storytelling. So subtle in fact, that you may miss a scene being played out in the background as you focus intently on the next fiendish impediment to your progress. But could this be exactly what was intended? For players to look up and discover that the world has shifted while their attention was diverted? It’s an interesting thought. But one thing’s for sure: if you like to take your brainteasers with a side of cyberpunk, 7th Sector is for you.

7th Sector is a single-player puzzler set in a dystopian future. As well as stunning pixel art, haunting soundscapes and satisfying puzzles, the game also treats players to a disturbing narrative. A challenging title worth the brain power.