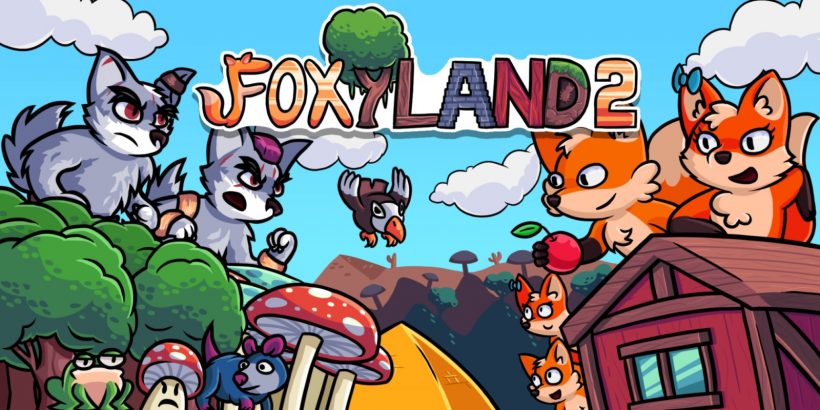 He’s already had to go on a marauding adventure to save his girlfriend Jennie after she was swept away in the clutches of a ravenous bird. He’s barely had a month to come to since his first Switch adventure released, and already his loved ones are in danger once again. This time, his children have been abducted by the Wolfie brothers. The guy just can’t catch a break.

While FoxyLand 2 is overall a very similar game to the original, the difficulty has quite noticeably ramped up. Hazards are tricky, from pinpoint jumping to swooping enemies which you can never easily predict from the off, and players will need to have their wits about them far more than they did before. As you’d expect, things get progressively more difficult from the start, but the premise remains the same: have Foxy move out of the way of the ‘thwomps’, the evil mushrooms or the enemies returning from the first game, and then to safely ensure his passage to the castle or house at the finishing point.

The collectable diamonds of the first game, which needed to be collected in order to allow players to finish levels, have been done away with and replaced by three giant coins per level in the style of a Super Mario World. These will often be placed in hidden alcoves that you won’t be able to spot without carefully surveying a level, though handily they are signposted by markings on the walls they hide behind. It’s still very easy to miss them when you’re unused to a level and are more focused on avoiding the danger posed by enemies, however, so the need to replay levels to find them is important, as there are certain checkpoints on the world map (which itself now looks somewhat Super Mario World-inspired) which you can’t pass without having a set number of coins.

The cherries also serve a different function this time and can be shot in straight lines towards enemies. They’re particularly handy for doing away with enemies that fly which can’t easily be bounced on from above – the trick comes in the form of reaching higher ground to the side of them and timing your shot towards them on the right part of the trajectory of a jump. You can carry a max of four at a time, and there’ll be points where you fire off a few wayward shots and have to backtrack to the nearest cherry tree or bush in order to replenish your stash.

Much like the first game, the overall size of levels is usually short, and if you didn’t have the coins to worry about, you could probably rush through them all care-free in less than a minute. But, with the coins included, this is very much a game about exploring every nook and cranny of each level. You won’t feel 100% done with the game until you’ve found all three coins in every last level, and some levels even have the added bonus of a hidden flag to find which unlocks a bonus level. There are forty levels in total this time around, four more than the first game, and they are largely more satisfying than those found in the first game. Some irritations persist, like Foxy climbing ladders when you jump near them rather than jumping to the side, but commendation should be given to the developers for their improvement.

FoxyLand 2 is clearly an improvement over the original, albeit with much more difficulty. With forty levels of short length, it’s quite feasible to tackle the whole thing in two or three sittings, but the platforming is good, and feels more fair than it did the first time.