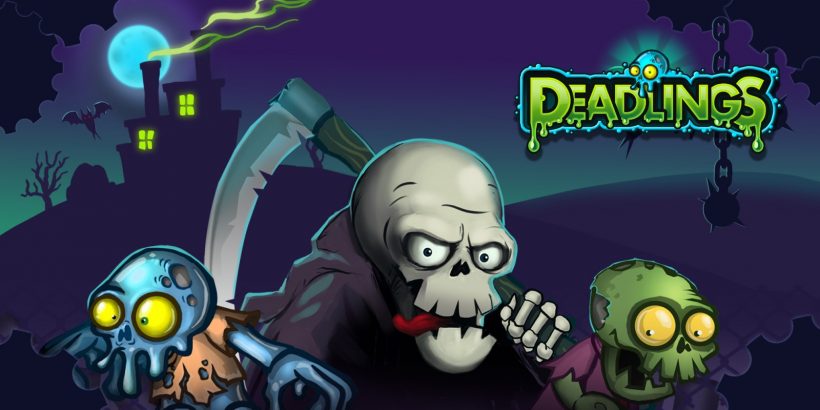 It seems the mortality rate’s been kind of slow for this particular apocalyptic horseman. Life expectancy is up, check-out numbers are down, and Death’s got a quota to meet.

Seemingly unsatisfied with their traditionally poor, shuffling performance, Mr G Reaper is overseeing the development of a new breed of zombie prototypes in Deadlings – a Lemmings inspired action puzzle platformer – developed by Artifex Mundi, and published by All In!

Originally a mobile game that’s been adapted for the Switch – incidentally the biggest version of the game available – Deadlings offers a clever combination of puzzle platforming action that will have you scratching your noggin’ whilst dexterously manoeuvring through 80+ levels of zombie-filled fun.

In each of the controlled testing environments, the objective is simple – reach the exit gate. What complicates matters are the deadly spike traps, ferocious saw blades, turrets, switch gates, and numerous other obstacles in the way.

For those familiar with the Lemmings series, you’ll recall that the little critters move autonomously, and you have to give them different roles to enable them to manipulate the environment to reach the exit. In Deadlings, this is a little different. Yes, they do move on a set trajectory, but in Deadlings you have to also manually control your zombies to initiate each of their abilities, meaning that fast reactions are as key as a strategic mind in a successful game.

There are four zombie types in total – each with its own speciality. Bonesack can jump over obstacles, Creep can stick himself to surfaces, and Stencher can fly using the power of zombie-farts – a tool far underutilised in gaming, if you ask me. Finally, Lazybrain is unique in that he can stop and start walking on command, allowing him to be strategically placed around the level for the purposes of puzzle solving.

Each level has three potential stars up for grabs; one for completing the level, one for beating the target time, and one for collecting all the brains scattered throughout – the latter meaning that you often divert from the most obvious path. However, I was impressed in the way the developers ensured that collecting all the brains, and beating the target time could be done on the same run, giving you a sense of accomplished joy as you master the fluidity of play, hitting those targets.

At the start of each test chamber, you’ll be given an opportunity to view the map as a kind of blueprint – setting the scene in clear colours and shapes. The Switch’s handheld mode is perfect for this, utilising the touch screen to seamlessly explore the level. This becomes critical towards the end of the game, as you’ll not only be working out how to get to the exit gate, but all the steps that you’ll be required to take along the way to make that happen. If you want those prestigious extra stars, you’ll need to always be thinking three steps ahead.

With 60 campaign levels, 20 bonus levels, and an optional “Nightmare” mode that increases the complexity of traps and puzzles, there’s a lot of game here for the low price point. It’s the perfect pick up and play title for those five-minute gaming windows, and duly recommended for your portable collection.

For the price point, Deadlings offers a lot of content, executed with consistency in quality, and with enough variation to feel fresh. This is a really solid title that doesn’t outstay its welcome, and is a worthy addition for your eShop collection.