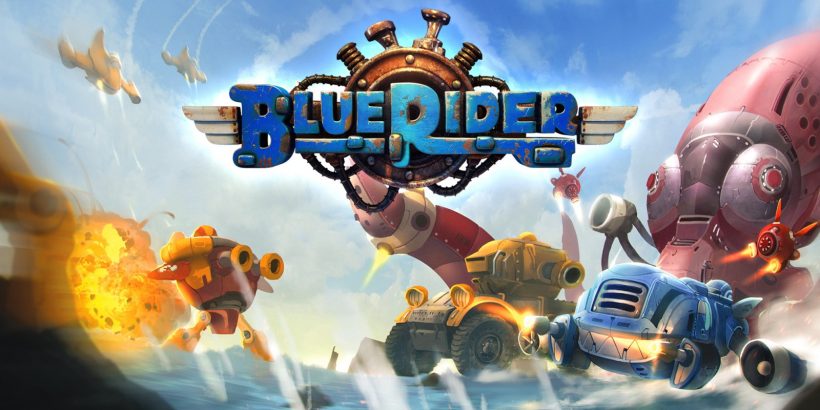 In essence, the game hearkens back to the days of dropping a stack of tokens into an arcade machine and gunning for the high score. It’s an arcade shooter in its purest form, free from the convoluted plot-lines and cut-scenes that overstay their welcome. It’s just you, your hero, a cannon, and some bombs. In this day and age, when a tutorial can easily take up two hours of your time, it’s a refreshing call-back to a simpler time in gaming. And I’m certainly all for it.

But don’t let that description fool you — Blue Rider feels like a modern game. The controls feel tight and responsive, the colours pop, and the difficulty feels fair and satisfying, even on the hardest setting.  It’s not a very long game, but that’s really not the point –  dethroning the current king of the leaderboard, as well as topping your own high scores, will keep you coming back after you’ve demolished the game’s dozen or so stages. Once you’re hooked, you’re hooked.

Players assume the role of the titular rider who navigates a series of worlds in search of an exit, which is generally protected by a huge boss in dire need of an attitude adjustment. You’ll navigate the landscape with the left stick, turn your vehicle around with the right, and unleash bombs and cannons with the ZL and ZR buttons, respectively. Outside of two buttons devoted to boosters, those are all the controls you’ll need. Again, the design feels simple and basic, but it serves the gameplay well. Thankfully, Blue Rider doesn’t need deep mechanics or complexity to accomplish its goals.

Of course, this shooter certainly isn’t without its faults, though none of them really ruin the experience. Although I’ll gladly champion the game’s decision to keep things simple, the stages and enemies types ultimately lack variety; by the third stage, you may feel as though you’ve seen everything Blue Rider has to offer – and you wouldn’t be entirely wrong to think so. While the boss fights do shake things up a bit, everything in-between has a familiar feel. Fire, kill, repeat – that’s about it, really.

One thing I could have used during my adventure: a mini-map. Since the environments look so similar, I often became lost whenever I’d attempted to double back to search for collectibles. This probably flies right in the face of the high marks I give the game for its old-school flavour, but it would have come in handy. A small nit to pick out of an otherwise fine game, but it’s worth noting if you, like me, have grown accustomed to such luxuries.

Blue Rider won’t appeal to a large number of people, given its small scope, lack of story, and simple gameplay. But for those of us who loved pumping tokens into arcade machines while cursing the person whose name you couldn’t knock out of the top spot, it scratches an itch you may no longer be accustomed to. It’s addictive, charming, and tight, all of which make for a fine shooter. And while I doubt I’ll ever see my name atop of the international leaderboards, that certainly won’t stop me from giving it my best shot.

If you’re here for story, look elsewhere. Blue Rider wants you to devote all your time to destroying everything around you. It doesn’t reinvent the wheel, but it’s a lot of arcade fun to take for a spin.