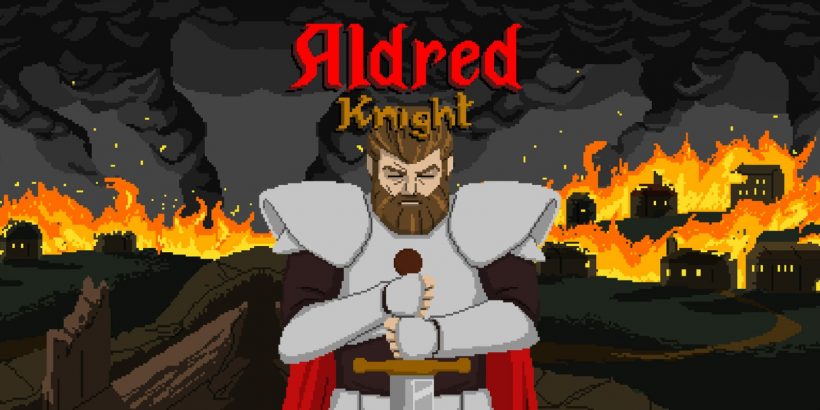 About ten years ago, everything an indie game would need to do in order to catch people’s attention was, well, be an indie. The mixture of an evocative pixel art style and any kind of nostalgic genre (platforming, shoot ’em up, beat ’em up, arcade, or similar) was enough to make it feel different to everything else you had in the AAA market. Nowadays, however, the indie market is saturated with such experiences. While competent in most of what it does, Aldred Knight doesn’t have enough to stand out from the crowd.

A single glance at Aldred Knight‘s artwork should be enough for you to understand just the kind of game it is, as the eShop is full of similar titles. With simplistic pixel art that follows a style reminiscent of the 16-bit era, Aldred Knight provides a 2D platform experience in which combat and platform-focused segments are mixed in a seamless way. Across the dozens of levels of its campaign, you’re tasked with the objective of defeating the forces of evil, saving innocent villagers, and trying to deal with some infuriating platforming sequences.

Before putting you in motion, Aldred Knight presents a brief explanation of the world and lore. Similar to everything else in the game, the narrative is a simplistic one; all you need to know is that an evil being is wreaking havoc, and you’re a member of an order prepared to deal with these situations. It’s hardly the most inspired tale.

The main appeal of Aldred Knight lies in its gameplay, though. At the beginning, Aldred is equipped with a sword, but he learns a couple of magic spells and additional tricks along the way. The combat is all about learning the enemies’ patterns and acting accordingly, and pretty much every level in the campaign has different segments where the focus is either on combat or platforming action. At the end of each map, you’ll also face epic boss fights, where your skills will be put to the test in interesting ways.

It’s when you’re not engaged in combat, though, that the problems start to emerge. To get through the levels of Aldred Knight, you must deal with a series of hazards. Spikes, moving platforms, and saws are only a few of the obstacles you will face. In order to survive these challenges, you need to time your jumps well, but unfortunately, controlling the character in these moments can become a real chore. Unlike other hardcore platform games such as Celeste or The End is Nigh, Aldred Knight puts you in tight situations, but doesn’t give you the tools to succeed. This frustration comes from Aldred’s floatiness; you don’t have much control when he’s in mid-air. Consequently, once you commit to a jump, you barely have room to adapt.

If you can overcome these problematic segments, Aldred Knight does provide a good amount of content, especially when you consider its entry price. Each main level has a series of collectables for you to find, such as evil totems that you can destroy, lost people that you can rescue, and gold that you can collect and use to unlock upgrades. If you separate all of the elements found in Aldred Knight, you can see it as a game with good ideas, but imperfect execution. For platforming fans, it’s a cheap option in the genre, even though there are several other similar titles available on the eShop.

Aldred Knight is a 2D platformer on a budget. It has a simplistic art style and a competent combat system, but it leaves something to be desired when it comes to its more hardcore platforming segments.