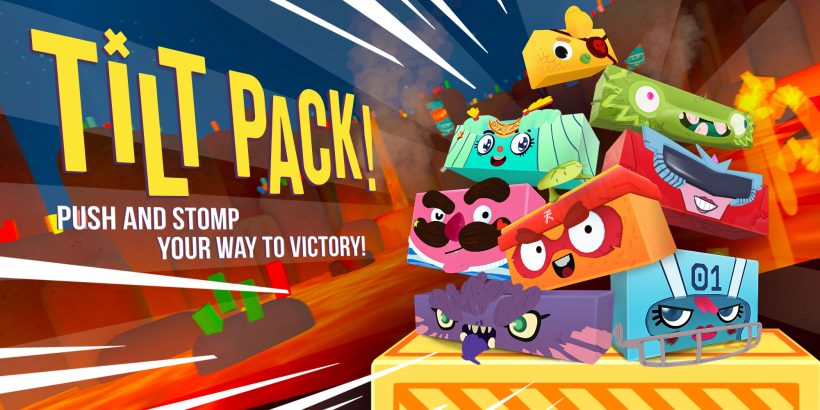 Sometimes, clever ideas for new games are staring us in the face.

Navel’s Tilt Pack is one such game that fits into that ‘why didn’t we think of this?’ bracket. This is, put simply, a fighting game where all of the characters are cuboids. To help that slowly register, and as you wonder how that could possibly work, think of this as a physics-based fighter, whereby the battling is 2D and involves the angular protagonists simply rolling from side to side in a bid to force other players off the battlefield. Naturally, moving right has your block rolling clockwise, and vice versa, and it’s a constant battle with the other players to achieve the leverage needed in order to push others while maintaining a steady base yourself.

That might sound a ridiculously simple premise for a game, and you wouldn’t be wrong to think so. But what came as a major shock is the fact that the game is really quite moreish. What’s more than likely is that you won’t win any of your first five to ten battles, but then when that eureka moment hits is the point when the addictiveness kicks in. You suddenly have an urge to bludgeon every rectangle in sight; to leave no rectangle standing, and to smash them all into a fiery pit of hell. Battles can range from standard, stationary platform scenes to incorporating moving platforms, and they are at their most impressive when you manage to flip yourself back from the brink, whether it be with the aid of a moving platform or through just managing to get the leverage on an opponent to roll back from a seemingly certain fall.

The trouble, however, is that there’s not enough to be getting on with in Tilt Pack. You have a choice of two game modes. One is a campaign mode, something akin to the Super Smash Bros series’ Classic mode. You pick one of the game’s different rectangular characters, which all have a different shape, from a tiny size to a long and thin oblong, and then take on a series of one-on-one battles against all of the game’s other characters.

You can choose between five different courses all sharing a slight theme (differentiated by the theme of their backgrounds, most noticeably) and after chopping down all the rectangles that come before you, the reward is simply a crown over that course’s name in the game’s menu. Besides unlocking the fifth course for finishing one of the others, there’s no real tangible pay-off for completing a playthrough.

Tilt Pack’s only other mode is the self-explanatory arcade mode, where you and three other friends (or the CPUs) can take part in four-way, last man standing battles. It’s a first-to-five wins setup, and it’s arguably the more enjoyable mode whether you’re on your own or with friends, as the satisfaction of winning a battle against three opponents as opposed to just the one is by far the better payoff.

But the game’s simplicity is both its strength and its weakness – once you get the hang of the fighting part and figure out how to win matches, there’s no real twists to the formula you have left to experience. There could have been a timed ‘most eliminations in three or so minutes’ gameplay option, which would have been possible to do without the need for any sort of amendment to the easy controls. Tilt Pack is a fun ding-dong, but not for long.

Tilt Pack is one of those easy to pick up, hard to master games which can become super addictive for a time. The problem here is that time doesn’t last long enough as there isn’t too much new to do once you’ve played the game’s two similar modes.