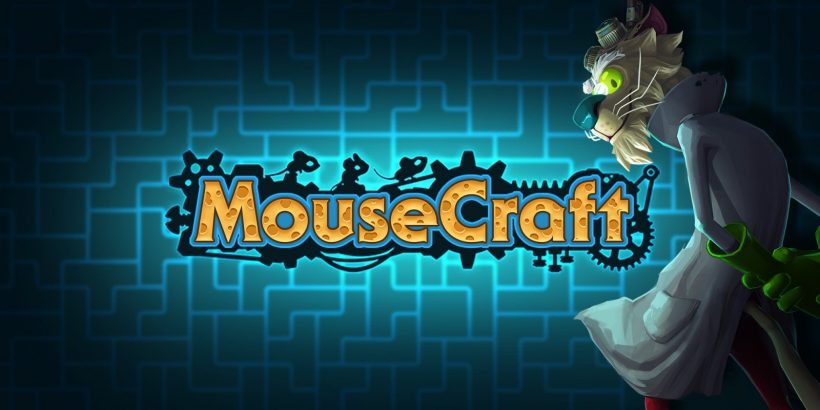 I didn’t expect much going into MouseCraft. Its cartoony aesthetic and generic name screamed “average” at me. But, in the end, I was pleasantly surprised to find a polished and enjoyable puzzler underneath the deceptive exterior. Even if the story and soundtrack are admittedly forgettable.

Every level in MouseCraft gives you the same basic goals. Using the blocks and bombs in your toolkit, you must build and break the level to guide three (possibly blind) mice to the cheese. As a bonus objective, you’ll want to pick up the tricky anima crystals along the way too. Of course, I went for one hundred percent completion, because who plays a puzzle game and doesn’t strive for perfect scores on every level? I thought that was the whole point…

What I enjoyed about MouseCraft though was that it’s not a simple matter of placing and forgetting to complete a level. You’ll almost always have to place blocks while the mice are moving. It becomes a real-time puzzle game of sorts, where you find yourself thinking several steps ahead of the game. It’s really, really satisfying.

If you’re not too quick with your inputs though, there is a pause function so you can carefully drag and drop your pieces at the right time. Very considerate of the devs to include that. And, even better, you can undo as much as you please. Unlimited undo is a god-send in a game like this. Heck, I’d call it a necessity.

While the main objective is constant, MouseCraft spaces new mechanics and blocks perfectly across its campaign to keep things interesting. The difficulty curve is as close to perfect as I can imagine. Each new concept adds just the right amount of complexity to keep each level fresh, but still understandable. By the end, there’ll be dozens of elements all working in tandem for you to construct your solutions around.

The true test of a puzzle game in my opinion though, is how frequently it provides the fabled “a-ha” moment. That second where everything clicks and you call yourself stupid out loud, in front of your housemates… Yeah, the lightbulb moment. You know the one. MouseCraft had so many lightbulb moments for me. They were few at first, as the early levels eased me into how the game operates. But by the second half, practically every level gave me that moment. Browsing your loadout of blocks, before breaking down every step until you find that perfect solution, never ceases to be rewarding.

It is just such a shame that its presentation is so lacklustre. The visuals, while functional, don’t really pop or offer anything that exciting to look at. Even the cutscenes are few and far between, and mostly made up of comic-style drawings and rudimentary animation. Meanwhile, the soundtrack is forgettable and becomes background noise easily. However, I suppose you could argue that this is a positive since the last thing you want when you’re thinking is an overbearing soundtrack.

But overall, as far as I’m concerned, MouseCraft is quite the hidden gem. It played flawlessly in both handheld and TV modes, and provided an abundance of content for the price; something of a rarity for puzzle games. If you’ve got the cash lying around and the itch for a new puzzle game, MouseCraft won’t do you wrong

MouseCraft‘s simple aesthetic and generic name hide a polished and enjoyable puzzler underneath. The eighty levels will provide you with more than a few hours of puzzle-solving pleasure and an absolute abundance of lightbulb moments.