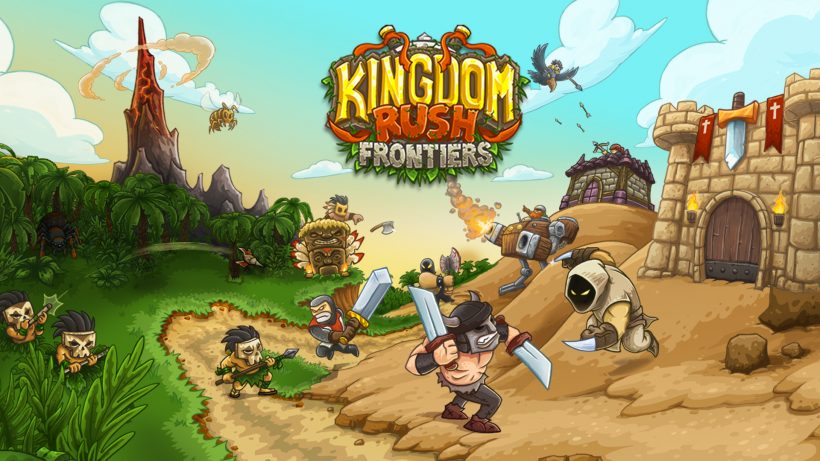 For all the thousands of free-to-play browser Flash games, very few have been exceptional enough to make the successful transition to console format. It’s a rare event – one that only occurs when the stars are perfectly aligned on the eve of a full blood moon. Kingdom Rush: Frontiers from Ironhide Studio is one of these games.

For those not familiar with the tower defence genre (and boy is this a good place to start), your mission in Kingdom Rush: Frontiers is to defend a set path against waves of enemies by strategically positioning an array of towers along the route to destroy whatever comes marching your way. If too many enemies make it past your defences, it’s game over. It can be played using your controller or the touch screen – both methods feel completely natural, though those already familiar with Kingdom Rush games on mobile may prefer the latter.

It’s a simplistic, tried and tested design, but what makes Kingdom Rush: Frontiers stand out is the level of depth explored within these basic parameters, constantly developing the strategies required to overcome its challenges.

You have four basic tower types: Quick firing archers perfect for taking down fast moving targets. Slow firing mage towers for decimating heavily armoured foes. Barracks spawn path blocking foot soldiers, and finally siege towers hurl bombs for area of effect damage. The key to victory is combining these towers effectively; for example, it’s no good blocking the path with ground troops if you don’t have the fire support to back them up – the enemy will simply break through – so you must ensure you surround them with more destructive towers for maximum effect.

Heroes are another feature at your disposal – powerful units that can be manually controlled to turn the tide of battle. Each hero is equipped with its own stats and skills, and can be levelled up. There are a couple of cool-down abilities that let you summon militia reinforcements, or you can rain down flaming balls of fire for massive damage. Managing all of these elements simultaneously is where the challenge lies, and although this is by no means an easy game (there is a righteous difficulty spike some eight or so levels in), an adjustable difficulty setting ensures that if it gets too much, you can always nudge it down a notch to see you past where you’re struggling.

Visually, Kingdom Rush: Frontiers looks fantastic. It’s bursting with colour and animations, with dynamic level design and unwavering attention to detail. One early level, for example, sees you defending a dusty canyon. If you look closely you can see little Tusken Raiders hiding out in the hills, firing down at the path. Many levels have these quirks, and you must always be wary of how these may help or hinder your progress.

All of these combined elements make Kingdom Rush: Frontiers a near flawless example of the tower defence genre. It’s fast, fun, and constantly refreshing its formula during play. The colourful, dynamic level design and huge variety of enemies, heroes, and tower upgrades ensure the franchise’s reign as the defending champion of the genre continues on the Switch.

Much like the enemy forces within it, Kingdom Rush: Frontiers marches down a well worn path, but the layered mechanics, bright dynamic level design and furiously fast gameplay keep the experience feeling fresh from start to finish.