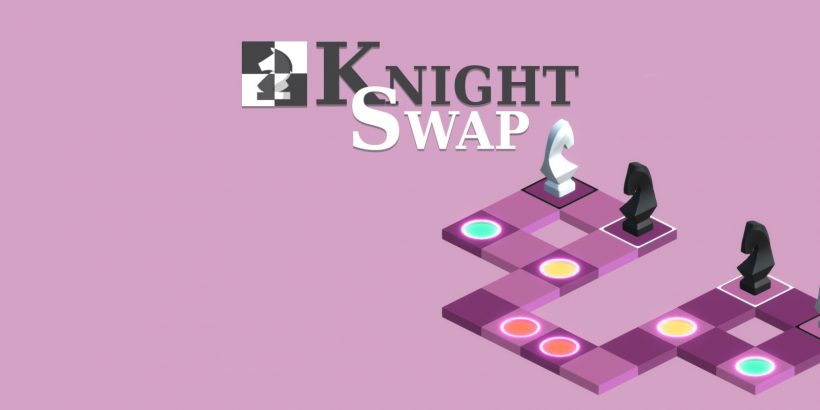 On its most classic form, Chess is, by itself, a complex and interesting game. After all, from its defined rules, a huge array of movements and possibilities arise, allowing players to express themselves in many different ways. Based on these basic premises, game developers have been creating all kinds of interesting and unique games, as they play with the Chess’ rules and possibilities. Zen Chess and Unlock the King (both are also by Minimol Games) are examples of a less orthodox approach, where Chess is transformed into a puzzle game –Knight Swap isn’t much different. It is, actually, a little too similar.

If you have played Unlock the King before (or if you’ve read our review), you’ll discover that Knight Swap is a very similar game, almost as if it is another side of the same coin. Here, too, Chess is transformed into a kind of relaxing puzzle game. With a minimalistic presentation, Knight Swap delivers 100 different levels, with an ever-increasing difficult curve. Here, too, you’ll use your knowledge about how the Chess pieces move to finish every level. The main differences with Knight Swap are its limitations and objectives.

Instead of playing with the many different Chess pieces, in Knight Swap, you’ll only have knights at your disposition. The objective at each level, as the title implies, is to swap the position of the white and black knights. In order to do that, you’ll have to play with the limitations and possibilities of the Knight’s “L” movement. While this creates a more limited kind of puzzle – especially when you compare it to how Unlock the King uses every Chess piece (aside from Pawns) –, Knight Swap provides variety by changing the board format and adding new elements.

Instead of using the classic 8×8 Chessboard, every level of Knight Swap features a custom board. There are lots of different formats, which obliges the player to get creative in how, when, and where to move each piece. Even so, Knight Swap doesn’t limit itself to just change the board formats. As you progress through its 100 levels, the game starts adding many unique elements, which change the rules considerably. In addition to moving in an L, you’ll also have to deal with trigger buttons that rotate parts of the boards, teleportation tiles, and movable parts. Thanks to these new elements, Knight Swap manages to ramp up the difficult, transforming what seems to be a limiting idea into something really worthy of your time.

Due to the simplicity of Knight Swap’s pieces and movements, the game feels like a more limited version of Unlock the King at times. This becomes a more prominent issue at certain levels, because more often than not, you’ll see yourself going through a long process of trial-and-error. So, instead of actually discovering the correct way of completing a stage, you can simply move the pieces at random until you eventually get to the correct answer. Also, the similarities between the two games make me wonder if they wouldn’t work better as a single package, where you play with the Chess rules, but with slightly different objectives.

Thanks to its minimalistic presentation and simple controls transforms, it is one of those games that work perfectly on-the-go, as you can resume at any time and play a quick level. In the end, if you’re looking for a kind of relaxing puzzle experience, Knight Swap is a good enough offer – especially if you want more of what Unlock the King offered.

In Knight Swap, Chess is transformed into a puzzle game where you have to play with the possibilities and limitations of the Knight’s L movement. It is a bit too similar to its spiritual-brother Unlock the King, but offers more of the Chess-puzzle experience.