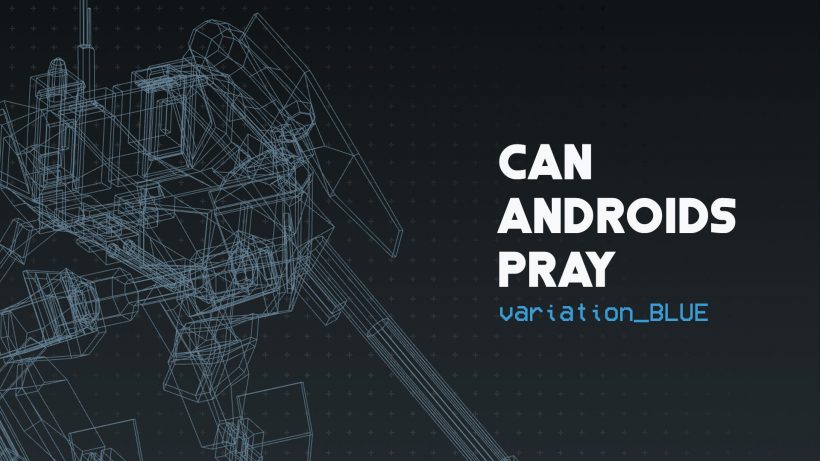 One day, you will die.

It is morbid to voice this so plainly as our world confronts a devastating global pandemic, but not only is the uncaring schedule of death a universal truth, it is also a central theme in Can Androids Pray: Blue.

The game takes the form of an interactive dialogue between two mech pilots who are facing an unexpected demise. What should have been a routine operation sees the two pilots stranded, dying, and alone but for each other on the now-inhospitable planet Earth, contemplating the things you might if you knew you had but a few hours left to live and were sitting on a secret that threw everything you previously thought you knew into question.

Over the course of the game, the two forsaken pilots grapple with major existential questions about their own humanity, God, and the lives they have lived. Despite the frustration conveyed by the pilots’ snark and (occasionally distracting) swearing, there are also softer moments as the two face their end together; the result is an evocative journey that hits all the notes from desperation to resignation and release, which is all the more impressive given that it does this in the space of about fifteen minutes.

Certainly, Can Androids Pray is one of the shortest narrative games you’ll find on the Nintendo Switch, but those fifteen minutes will leave you pondering the experience well after its completion. The game is admittedly short enough that you can play it multiple times easily, but the first playthrough holds a gravity that’s missing in subsequent runs – the game feels designed to be played once, perhaps twice, but no more. This is by no means a bad thing (and indeed, short games are something I’m personally quite fond of), but keep this in mind if you prefer longer narrative journeys over slice-of-life snapshots.

Despite the short length, there’s still a degree of branching in the dialogue: being too dismissive or standoffish may result in the omission of key details, while admitting your own vulnerability may create a moment of shared understanding that contrasts against the harsh landscape and harsher reality of your circumstances.

The wry dialogue plays out at a measured pace, with your text-based interactions interspersed with lingering shots on the barren-yet-beautiful landscape, which slowly gets illuminated as the sun rises. There’s a sense of introspection conveyed when you and your interlocutor fall silent, as though the game is asking you to reflect on the journey so far and the questions it’s raised. Throughout it all, a mechanical soundtrack steadily marches you onward, smoothing over the abrupt transitions between dialogue and silence. Despite the ever-increasing tension of the music, though, there’s a soothing reliability in its rhythms – a reliability which is thrown into stark relief by the silence at the end of the game.

Questions of faith play an expectedly significant part in Can Androids Pray, both in terms of theme and plot, and although the symbolism is pretty overt, it’s nevertheless powerful. Even the ending, which is open to interpretation, is a metaphor for the questions the characters grapple with in their final hours – as well as arguably for faith itself.

Indeed, Can Androids Pray is heavy – there are no two ways about it. But while the narrative may well leave you reeling, it’s sharp, reflective, and beautiful all the same.

And if you like a bite-sized, thought-provoking story? By God, it’s good.

Can Androids Pray: Blue is a hard-hitting, starkly beautiful narrative adventure. You’ll undoubtedly spend longer reflecting on the experience than you will playing it, but all of that time will be time well spent.