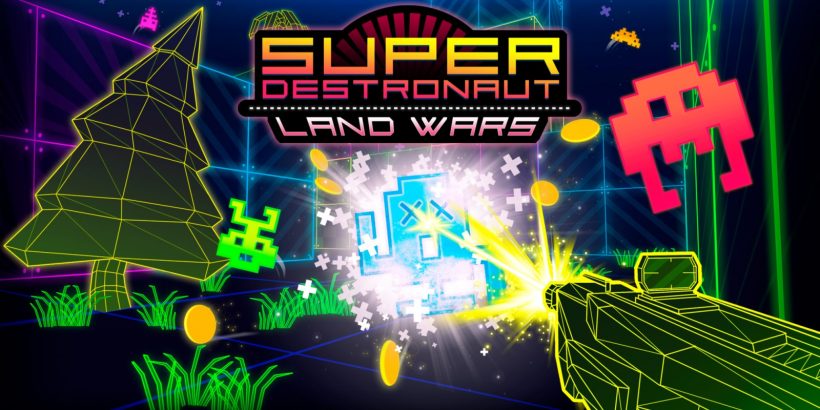 If you’re the kind of person that enjoys the thrills of climbing leaderboards on arcade titles, you’re well-served with the Switch library, as there are plenty of titles to choose from. However, more often than not, these arcade games are limited to the genres already present in old arcade machines: shoot ‘em ups, twin-stick shooters, and platformers are just some of the examples. Compared to these classic-inspired titles, Super Destronaut: Land Wars stands out thanks to its unique approach. After all, not many arcade titles are actually first-person shooters.

What makes the uniqueness of Land Wars even more apparent is that fact that the entire game happens on the same universe as Super Destronaut DX – which, on the other hand, is a pretty standard arcade game. Land Wars shares similar visuals and themes as this previous title. However, this is a game that takes place as a kind of ‘what if’ scenario of this Space Invaders-like approach, in which the aliens did manage to invade. What happens now? Well, an intrepid survivor will grab some guns and fight them on land!

Following that premise, Land Wars provides simple but competent FPS gameplay. When it comes to the shooting mechanics, you have a lot to praise here. Land Wars has different weapons for you to kill aliens with, including a machine gun, shotgun, rocket launcher, grenade launcher, and a laser gun. With this arsenal, the game provides a pleasant moment-to-moment gameplay, where the mere act of walking through the scenarios defeating aliens is fun enough. Unfortunately, these mechanics are held back by the arcade structure of Super Destronaut.

You don’t have any kind of story mode nor progression. The closest thing to that is the challenge mode, which consists of a series of specific objectives you need to achieve in a set time. Even in this mode though (and especially on the other game modes), repetitiveness is the keyword of Land Wars. The game only has one map, with no additional scenarios or visuals. You’ll always fight the same set of enemies. And, after dying, you’ll have to start all over again. As an arcade game of old, the only thing you keep is your high score, and that may not be enough in the long-run.

If you enjoy this kind of “just one more run” gameplay, then Super Destronaut: Land Wars does provide some different gameplay options for you to tackle. In addition to the challenge mode, you have five different arcade options, with unique difficulties and rules. Classic Mode has the most basic set of rules. If you want a more challenging experience, then there is the Hardcore Mode, where enemies deal more damage. Combo Breaker is focused on keeping a single-streak of kills, and Maximum Strength makes you and the enemies more lethal. Lastly, there’s the Snail Mode, where you can’t jump and walk a bit slower.

In the end, with its vaporwave-inspired graphics, Super Destronaut: Land Wars provides a solid FPS gameplay that really shines when it comes to its most basic mechanics. In order to enjoy it on the fullest, though, you really need to be fond of the repetitive approach of arcade titles. After all, despite having many different modes for you to try out, the only reason you have to keep fighting aliens is that shiny new high score at the end.

Super Destronaut: Land Wars takes some basic themes of the Space Invaders experience and twists them by adding first-person shooter gameplay. While the shooting mechanics are fun, the arcade structure feels a bit limiting and repetitive.