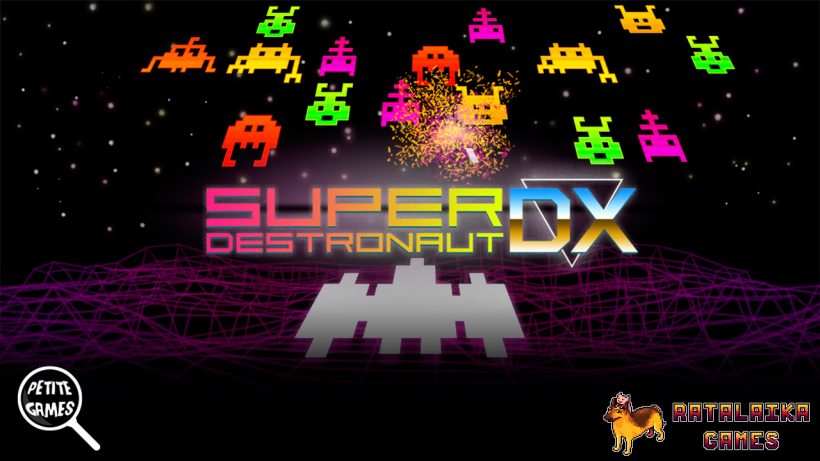 It doesn’t matter how ancient a title or a genre may be, indie developers always seem to find a way to create nostalgic experiences from the past. From pixelated art styles to neglected gameplay systems, everything that was success before can find its way to modern times thanks to indies. More often than not, these recreations come with many new ideas and iterations, including unique enhancements and improvements upon old-school formulas. Unless, of course, when the game doesn’t really create something new, and just seems to copy ideas from predecessors. Unfortunately, that’s pretty much what happens with Super Destronaut DX.

A quick glance at any screenshot from the title is enough to deduce its obvious influences. Even with its fancier visuals, anyone can see that Super Destronaut DX doesn’t even try to hide the fact that it is a kind of modernised Space Invaders. Here too, you’ll fight against many funny-shaped aliens (some with very familiar formats, others with new ones), which comes towards the direction of your spaceship. While evading the aliens’ attacks, you must kill them all before they reach the bottom of the screen. Once you wipe the screen, a new wave of enemies will appear. As you can expect from this kind of arcade-ish experience, killing enemies will reward you with points, and you can combo your kills for a multiplier which increases your score further. Pretty common and straightforward, right?

That’s the main ‘problem’ of Super Destronaut DX. It is undeniable that it is a competent game when you consider its main gameplay mechanics. However, despite its different game modes (which we’ll address in detail in a moment), it doesn’t really offer much more than what you get from its 5 starting minutes: a good-looking but simplistic recreation of Space Invaders. Due to the lack of truly new elements, Super Destronaut DX feels a little too familiar, as there are many other indie titles that have tried to recreate Space Invaders before – at times, in much more interesting and inventive ways.

If you’re up for this nostalgia-driven experience and want more than to reach the top of the leaderboards, Super Destronaut DX offers 5 distinct games modes for you to explore: Challenges, Classic Mode, Time Attack, Hardcore, and Multiplayer. Between those, Challenges is the closest you’ll get to a single-player campaign. It resembles an achievement system a bit, as it’ll task you with 30 distinct tasks that you can perform while playing in other modes.

Classic Mode, Time Attack, and Hardcore are all variations of the main Space Invaders-like loop, with distinct focuses. While in Classic Mode you’ll have a balanced, normal experience, Time Attack demands velocity and Hardcore puts you against harder enemies from the get-go. Finally, with the Multiplayer mode, you can call in a friend for couch co-op fun.

Due to the repetitive and score-focused nature of Super Destronaut DX, it doesn’t take much more than one hour to finish all the challenges and try every single mode the game has to offer. Going through all challenges is a pleasant – even if simple – process, because the basic mechanics of Super Destronaut DX are decent enough. However, in the end, unless you become really invested in trying to be featured on the top of the leaderboards, it is impossible to through Super Destronaut DX without the want for more than a mere Space Invaders clone.

Super Destronaut DX is an arcade-ish indie title that recreates the classic Space Invaders experience in a competent-but-simplistic way. It isn’t necessarily a bad game, but it doesn’t offer enough new ideas to keep the player hooked.