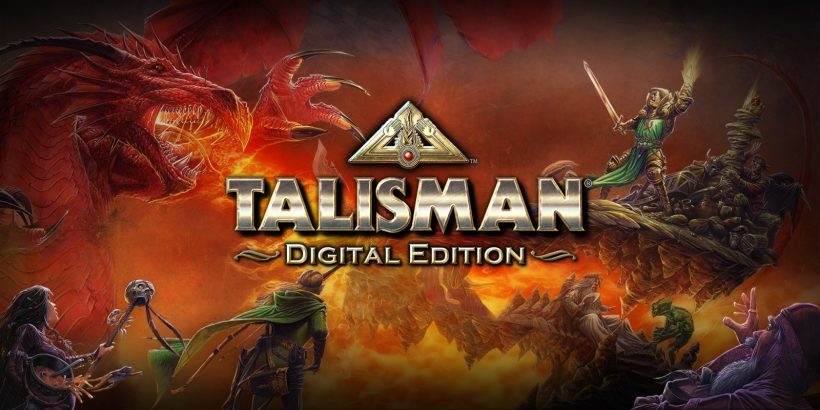 If you have ever cursed out loud while playing a board game when a dice has rolled under the table, then this digital incarnation may be perfect for you. Talisman – the board game – has evolved through several editions since the 1980s, and features an expansive game board encompassing three regions (the Outer Region, the Middle Region, and the Inner Region), a stack of adventure cards, and a selection of plastic figures to choose as your character.

Talisman – the video game – transposes all that physical product to your Switch, but the question is: can the digital version do justice to the board game, and can it offer anything new? If we are to judge Nomad Games’ Talisman offering on its authenticity, then the good news is that the developers have managed to replicate the game very accurately, right down to the beautiful artwork adorning the adventure cards.

Each round in the game requires a dice roll for movement, from which the instructions are followed on the board space that you travel to. Most spaces ask that you draw adventure cards from the deck, which may reveal foes to battle against (either with weapons or with magic), treasure or equipment to add to your haul, followers to join your team (which may help or hinder your stats) or events that change the dynamics of the board in some way.

Talisman requires plenty of decision-making moments and tactics on the part of the player but is a game that also relies on a strong element of chance. The dice rolls (now safely made on-screen, so no wayward dice to worry about) play a large part in events, to the extent that crucial game-changing moments can boil down to an unlucky roll.

And what are those dice rolls trying to achieve? Your quest is to navigate the game board, build up your character’s stats, weapons and followers, and then – once you feel your character is ready – travel to the Inner Region of the board where the deadliest foes await and attempt to retrieve the legendary Crown of Command. The other players are racing to achieve the same goal, and so the game requires a balance of buffing up your character, but not taking so long that another player beats you to the Crown of Command.

Playing handheld brings the advantage of the touchscreen, although on a TV the in-game text is easier to read. Menu navigation can be a little clunky at times, and viewing the full content on an adventure card requires some scrolling of text. It is certainly not as immediately accessible as holding a physical card in your hand. The rules of the game are conveyed as you play but may seem a little overwhelming to a new Talisman player.

Talisman can be played in local co-op mode or via online play, either by browsing for a public game or setting up a private gathering. Of course, it is more fun playing against others than relying on the Switch for your opposition.

This video game translates the board game to the screen with few additional tweaks. The figures move around the board just like their plastic counterparts – as if slid by an imaginary hand. There are no additional flourishes to take advantage of the different medium; no moments of visual flair to indicate the casting of magic, for example. Talisman is a functional and authentic recreation of a board game classic.

Talisman is an efficient recreation of the board game, right down to the pricey expansion packs available separately. There is a rich variety of content for intrepid adventurers, if you can handle the moderately user-friendly menu system.