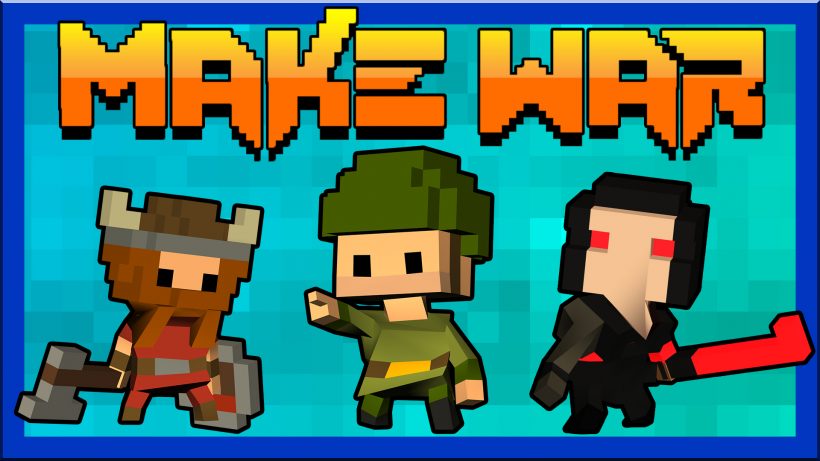 When I was at school, I would often rebel against the ‘No games on the computer’ policy by playing a flash game called Age of War — a strategy game that advances through subsequent generations of weaponry and soldiers. Make War follows a similar trajectory, only with extra aliens thrown in for fun.

In Make War, you take control of an alien race attempting to change the outcomes of significant battles across the globe — from both the future and the past. Rather than just having one main task, there are a variety of different type challenges players must complete before moving on to a different period. These include ensuring the victory of one side, killing a specified number of units, and stretching out the battle past a required time limit.

To fulfil the challenges, you have a bunch of alien tools and soldiers at your disposal that you can place around the battlefield. These can be as simple as some basic warriors, to more complex machines that slow down enemy units. Once your setup is complete, you can start the battle and witness the carnage of voxel soldiers charging aimlessly around the battlefield. One feature I found particularly useful was that once you had completed a challenge, you could reset the battlefield and move on, rather than having to wait for the battle to finish.

While the aesthetic may scream Minecraft to some players, there is no doubt that Make War is a challenging strategy game. Careful planning is needed to complete the challenges, but there is lots of room for creativity in combining certain alien soldiers with other tools, or luring units into traps so they can be ambushed by your snipers or a well-placed explosive device. The AI is not as smart as you may have hoped for, with ground troops programmed only to run towards the nearest soldiers, often ruining well-thought-out strategies when a whole platoon changes its course to bombard one helpless alien.

There’s no mistake in that Make War was made for PC. I’ve never particularly liked playing console games using a cursor, as it can often be slow and limiting in what you can do. Make War falls into this trap, with the cursor making the set-up quite tedious when placing and removing different elements of your alien army.

What stops me from being able to recommend Make War to fans of strategy titles are its huge localisation issues. The translation from Russian to English is not up to standard, with spelling mistakes and grammatical issues a common occurrence throughout. This isn’t so much a problem with some more action-based titles where the goal is pretty simple to figure out, but in a game where challenges are less obvious, it can almost ruin the game.

It’s a great shame that Make War is marred by these issues, as it’s ultimately a unique experience that could stand out in the strategy genre that often feels stale. In its current state, I’d give it a miss.

Make War is a promising strategy game that is plagued by localisation issues. If you’re still interested in its unique simulation elements, I’d recommend playing it on PC to avoid the frustration of using a cursor on the Switch.