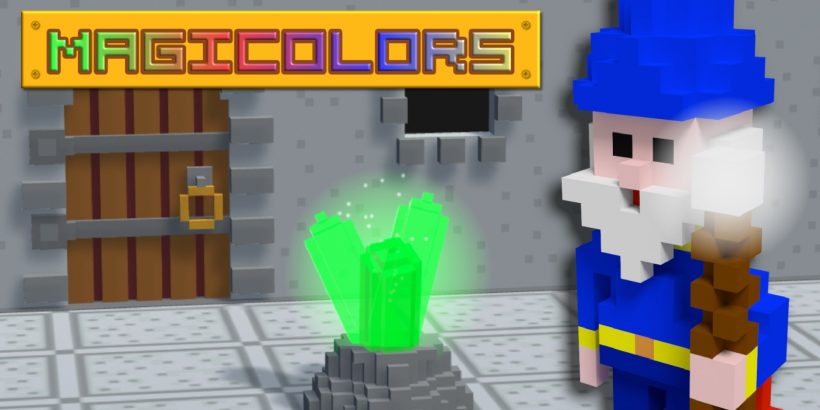 One of the most impressive aspects of puzzle games is how they can take so many different forms. An apparently simple idea can branch out into uncountable different puzzles, becoming much more challenging and interesting with time. This is so true that a puzzle style known for its simplicity – the match-3 games – has seen many unique iterations with time, including superb titles such as Ironcast and Battle Chef Brigade. Magicolors, too, is another game that comes with a new interpretation of this famous puzzle, but it is one that, unfortunately, doesn’t reach the same highs.

The basic premise of Magicolors is as simple as it can get. You control a mage that is going through a kind of ordeal. To improve his skills and increase his spell repertoire, he must go through many different puzzle rooms, activating magic crystals along the way. To achieve this objective, he must do something as simple as shooting a magic missile that goes through three crystals of the same colour. While simple, at first, this objective becomes progressively more difficult, as you must play with different magic powers and perspective tricks along the way.

Every single puzzle room in Magicolors follows the same structure: a 10 x 10 grid where you see your character, the crystals, and many objects and obstacles within an isometric perspective. In a certain way, at first, this format is reminiscent of the classic puzzle game Lumo, with the difference being the visuals in Magicolors are much more simplistic. The game is entirely constructed with voxels – a kind of ‘3D pixel art’. With bright colours and simple textures, this results in an inconsistent presentation. While there are some highs and lows on different levels, the UI of Magicolors is really subpar, feeling much more like something from mobile shovelware than anything else.

Magicolors has some other elements typical of mobile titles, the most prominent one being a three-stars score system for each level. Completing the level is enough to get the first star, and this is usually a very simple task. However, if you’re aiming for the high score (which, in Magicolors, is important to unlock new spells faster), then you need to be aware of two other elements: the number of moves used, and the amount of spells cast. This mobile-inspired structure comes with some drawbacks, though. On the one hand, it works as a way to encourage the player to master each level. On the other, the problem lies in how strict these limitations are. It hinders your experimentation, and, more often than not, obliges you to replay the levels you’ve just beaten.

To make things a little more problematic, Magicolors has some serious gameplay struggles. The isometric perspective of the game is locked-in, and you can’t move the camera freely. All you can do is rotate the level on four distinct angles and, if that isn’t enough, you can access a top-down view. Even so, on harder levels, it becomes a chore to grasp the real position of all crystals and obstacles. This becomes a real issue when you need to shoot a very specific position. You can use the touchscreen for some selections, but the game isn’t fully adapted to the touchscreen.

Despite offering a unique approach into the match-3 puzzle genre, Magicolors suffers from some serious gameplay issues that really hinder the experience. This is a slow-paced puzzle that could be better if you didn’t have to fight with the controls.

As far as the match-3 genre goes, Magicolors offers a unique approach with its isometric puzzle rooms. Sadly, problematic controls get in the way, turning this into an experience akin to shovelware found on mobile platforms.